Between international crises and domestic controversies: Italy's relations with Russia 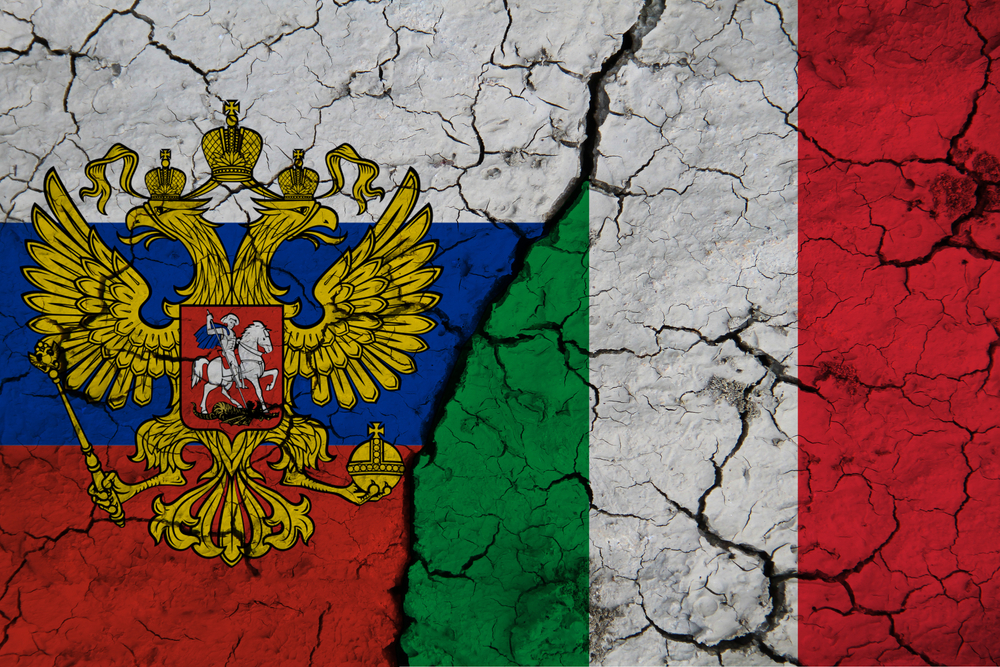 Post-Soviet Russia has become an important trade and energy partner for Italy. After the Ukrainian crisis, (geo)political divergences have greatly affected bilateral relations

Russia continues to play an important role in Italian foreign policy debates. Economic relations are often cited to justify this centrality. Yet, the Russian market makes up just 1.7% (8.8 billion dollars) of Italian exports, while Italian imports from Russia make up 3.4% (16 billion dollars) of the country's total imports.

The overall import/ export data hide some specificities of the commercial relations between the two countries. After the Ukrainian crisis, the Russian government has encouraged foreign trading partners to relocate and produce goods destined for the Russian market directly in the country, also leveraging the low cost of energy, convenient taxation, and access to the Eurasian Economic Union market. Although Italian exports and investments in Russia are limited compared to those in countries such as Germany, France, the United States, or China, they denote the presence of various strategic industries – in particular the steel, chemical, and mechanical ones – and Italys' trademark manufacturing and food sectors. Italian investments in Russia are supported by a solid banking and insurance system that has roots in the Soviet period: to cite two well-known examples, Banca Intesa and Assicurazioni Generali are among the main players in their respective sectors of the Russian market.

Russia plays a particularly important role in the Italian energy sector, especially in the supply of natural gas. In recent years, Russian gas has accounted for about 40% of Italy's gas imports. As gas makes up over a third of the Italian energy mix and domestic production meets just 7% of national needs, Russian methane clearly is a strategic source for Italy. As all Russian gas is imported via pipelines crossing Ukraine, some analysts have expressed concerns about the security of supply after the 2014 Ukrainian crisis. However, Kiev and Moscow – also thanks to EU mediation – managed to reach agreements which ensured the normal flow of gas (the current one is in effect until 2024). The overall thesis according to which Russian gas supplies would not be secure for Italy is not confirmed by the facts of recent decades. The Italian market is the second most important after the German one for Russian gas exports to Europe, and Moscow continues to have every interest in protecting this important source of revenue.

Although trade and energy relations are important, they do not justify the attention paid to Russia in foreign policy debates in Italy. The reasons are primarily to be found in the (geo)political developments of recent years. The Ukrainian crisis, Russian interference (presumed or real) in elections in the West – especially suspicions over the 2016 US presidential elections, and Russia's confrontational international attitude, much less conciliatory than in the past, have damaged Moscow's relations with the US, NATO, and the European Union. On the one hand, Italy suffered from the Russian conflictual attitude, on the other hand it was further dragged into the crisis by the positions of more intransigent NATO allies towards Moscow.

Russia, and in particular the figure of President Putin, has become a source of debate in Italy's internal politics, with opposite extremes that praise the 'strong man' of Moscow or see Russian interference almost everywhere. The controversy aroused by the aid sent by the Kremlin to northern Italy in the spring of 2020, during the Covid-19 pandemic, well portrays Russia's importance in the internal political debate. The fact that the Lega has for about two years become the first Italian party by consensus in the polls and that it maintains privileged relations with some Russian state actors, sometimes through opaque channels, has sharpened the internal sensitivity of the Russia issue.

In this tense, complex framework, the most responsible Italian institutional and entrepreneurial actors have continued to interact and develop their relations with Moscow, avoiding excesses that may cast doubt on the country's position on issues such as international law or compromise dialogue with the Kremlin.

Although not an ally country, and in fact often being a difficult interlocutor, Russia remains an essential player for Italy. This has become even more apparent in the past five years, since Russia has increased its presence in the Mediterranean chessboard through the use of force in Syria and skilled diplomatic and economic action in numerous countries in the Middle East and North Africa. The Mediterranean, and in particular the Libyan crisis, remain at the centre of Italian foreign policy. In Libya, despite not having the same interests and the same presence as in Syria, Russia has acquired an important diplomatic role. A resolution of the Libyan crisis that excludes Russian interests now appears difficult to pursue. At the same time, the Russian position is more flexible than in Syria and could be open to a European-led peace plan (when European countries overcome their divisions) that also protects Russian interests.

The sum of the scenarios in which Russia plays an important role – from the "traditional" ones in the post-Soviet space and in the energy sector to the new ones, such as the Mediterranean chessboard – make Moscow an important interlocutor for Italy. In the current context of growing geopolitical competition, in which traditional allies such as the United States show less presence in the Mediterranean and the European ones are sometimes guided by conflicting national interests, Italy will have to figure out how to relate to Russia in a balanced way, also through appropriate bilateral channels. In this regard, the country boasts an important tradition to draw inspiration from, adapting it to the needs of the present.