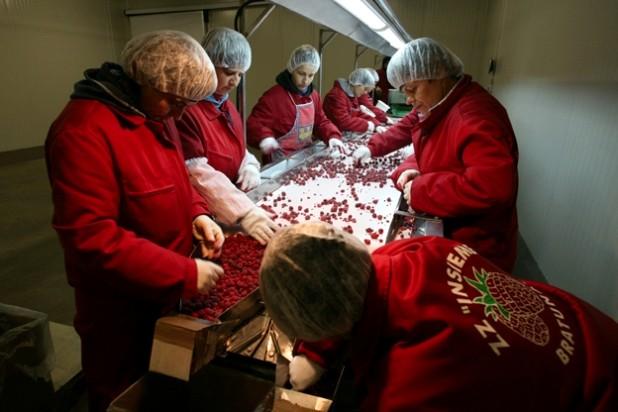 The most significant ORGANIC produce in the Balkans

The most significant produce common to almost all the countries of the region is that of small fruits (cherries, strawberries, raspberries, blueberries, blackberries), aromatic and medicinal herbs, and some types of cereals.

Fruit and vegetable production is significant in Croatia and is growing, for some kinds of cultivations, in Albania, Macedonia, Montenegro and Serbia (see table 16).

In the livestock sector, the most determined steps forward have been made by Croatia, Macedonia and Montenegro mostly concerning sheep and goat farming. Whereas for honey, which shows excellent cases in Bosnia Herzegovina and especially in Macedonia, the tradition is strong in the entire region and the development prospects for organic production within this niche are important.

Fruit production is one of the most important sectors and strongest traditions in Serbian agriculture. Thus it is no surprise that from the very beginning the organic market looked in this direction. The first exports of organic products date back to 2006 with BCS ÖKo (German Inspection Agency) that certified the first quantities of frozen fruits (blueberries, raspberries, plums, cherries and apples) for the Swiss market (EU – OFIS, 2006). Since then certified land for fruit production has grown consistently and the export of organic produce has quickly expanded to other European countries: Germany, France, Great Britain, Italy, The Netherlands and Poland (EU – OFIS, in various years).

Within the fruit sector, considering both organic and traditional cultivations, small fruit production reaches outstanding levels: in 2009 Serbia was the number one world exporter of raspberries for a total of circa 63,000 tons and a turnover of over 200 million dollars. What has developed in Arilje, Šumadija (Central Serbia), is considered to be a raspberry district, with more than 5,000 medium-small sized producers, high productivity plantations, a market based on seasonal work that depends on over 200.000 workers and an enormous network of storage freezing systems (KARAJKOV R., 2010). A case of excellence limited by a lack of infrastructure and a chain of production that does not include processing the fruit. Most raspberries, in fact, are exported frozen. Distributing the fresh product, which has a markedly higher selling price, would determine a great increase in income, but this also implies that the fruit must arrive at the outlets no later than 2 days from harvesting. An obstacle this, that is difficult to overcome, considering the infrastructures and bureaucratic-administrative procedures necessary to manage international logistics (KARAJKOV R., 2010).

Albanian olive oil production has an important history proven by the overall land dedicated to olive groves (about 8% of its total arable land), the strong government investments, the constant growth in the number of new plants sown, and the pole position it occupies in the Strategy for Agriculture and Food Development 2007-2013. Only in most recent years has the industry steered towards production in keeping with the standards of the main local retailers and international distributors, both in terms of quality and packaging. This effort came about, mostly thanks to the commitment of the Albanian Alimentary Oil Association (AOA) that, supported by USAID (United States Agency for International Development) and SNV (Netherlands Development Organisation), engaged in promoting quality olive oil production and stimulating producers to look towards the international market. Production, certification and exports of organic olive oil began in 2003 as part of the SIPPO programme (Swiss Import Promotion Programme) that allowed the pioneer Shkalla, with a certificate issued by IMO (Swiss Inspection Agency), its first entrance into the Swiss market, and later became the main point of reference for Albanian organic olive oil. In 2007 Albanian olive oil certification for the Swiss market was passed on to Bio-inspecta, active since 2004 in the medicinal herbs sector in the country thanks to its collaboration with Albinspekt.

Cereals and fruit and vegetables: organic production in Croatia

In the case of Croatia, the increase in land dedicated to organic production from 2002 to 2009 shows how arable land and fruit orchards have grown significantly. The total arable land allocated to organic crops has risen from 50 hectares in 2002 to almost 10,000 in 2009, while fruit orchards have gone from 30 to almost 1,300 hectares. Organic pastures are also rising and since 2006 they cover well over 2000 hectares of certified land. Cultivations with high value added, such as olives and vines, after having remained stagnant for a while, showed some new life in the two years 2008-2009. All this confirms Croatia's position as regional leader and reference point for the organic sector.