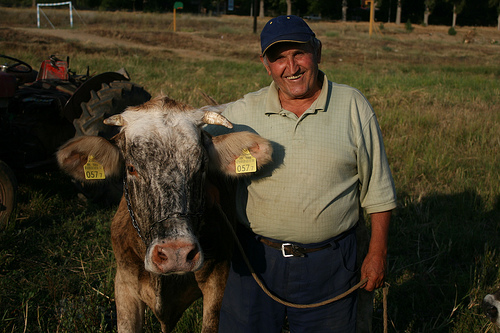 Not much, but something is moving. In Macedonia organic agriculture is gaining ground. The legislative framework matches European standards and funds are growing. Yet, a lot remains to be done. The sixth part of our investigation into organic agriculture in South East Europe

In transition economies, the idea that organic agriculture could be a potentially significant sector, largely stems from the fact that agricultural systems here are characterised by the use of traditional inputs (soil, work, capital) and a relatively limited use of synthetically produced fertilisers, herbicides, pesticides, etc.

This is also true for Macedonia, where private agricultural businesses – the dominant type, now – are mostly family-owned and have an average size of 2.6 hectares, with over 50% below the 1.5 hectares.

UNEP (United Nations Environmental Programme) is also in favour of a low-impact approach to agriculture in Macedonia and, within an initiative on green economy, has identified organic agriculture as a sector of special interest for supporting exports, jobs, and incomes in Eastern Europe and Central Asia.

Together with IFOAM (International Federation of Organic Agriculture Movements), UNEP has started to analyse the potential economic and environmental benefits of large-scale investments in the promotion of sustainable agricultural practices. According to Achim Steiner, UNEP General Director, there is increasing evidence regarding the organic sector's contribution to sustainability, in terms of water management, soil management, the protection of biodiversity and job opportunities in rural areas.

Organic agriculture has, in fact, become fully included in the range of practices that should support the transition to a green economy: from renewable energy, recycling and the reduction of greenhouse gases, to re-thinking consumer patterns.

Organic practices in Macedonia started in 2000, with the first inspections in 2003 and the issuing of the first certificate in 2004, thanks to a project financed by Swiss Cooperation together with FiBL, a research institute with branches in Austria, Germany, and Switzerland. The project was aimed at producing organic persimmons to be exported through the SIPPO programme – Swiss Import Promotion Programme.

At the same time, in 2001, a process aimed at defining a framework law started and was approved in 2004 along with 12 amendments, followed by others in 2005 and 2006. A proper revision of the legislative framework was carried out in 2009, with the introduction of law n.146 on Organic Agricultural Production, fully consistent with European Regulations 834/2007 and 889/2008.

At the institutional level, a significant step was undertaken with the approval of the National Strategy and Action Plan for organic agriculture in the Republic of Macedonia 2008-2011 that set important targets for 2011, such as 2% and 5% percent of the total agricultural surface, for organic agriculture and collection of wild plants, respectively; increasing the range of certified products and the number of businesses involved in their transformation; the consolidation of export channels and raising the awareness of local consumers about the ethics of organic farming. Other goals include the harmonisation of domestic laws with the European framework and the strengthening of the human and technical resources in the institutions involved in the certification and inspection processes.

Since 2005, there has been an increase in public support, the number of organic farmers, and an extension of the cultivated surface. Despite significant progress, the overall market is still underdeveloped.

Recently the organic sector's quota in the budget for agriculture has risen: from the less than 100,000 Euros of 2005, it exceeded a million Euros in 2009 and 2010, with funds divided between the different segments of the supply chain: production, processing and trade.

The surface cultivated with organic agriculture grew significantly, from 266 hectares in 2005 to over 5,000 in 2010 – close to the 2% target set by the Strategy for Organic Agriculture 2008-2011. If these figures seem modest in absolute terms, other elements contribute to show the increased vitality of the sector. Organic bee-keeping, for instance, counts over 15,000 certified colonies – 15% of the total farmed bees.

The main actors in the field of organic production include the Macedonian Federation of Organic Producers (Biosan) and the two qualified certification agencies – Balkan Biocert, licensed in 2005, with its headquarters in Plovdiv (Bulgaria), and Procert, that started up in 2009. Biosan, currently linking 8 local associations (Valandovo, Gevgelija, Strumica, Pehčevo, Sveti Nikole, Kumanovo, Skopje, and Gostivar), carries out crucial activities aimed at promoting organic values throughout the territory and offers training and consultancy services to growers willing to familiarise themselves with this sector.

The main activities in this field include initiatives for market development and the creation of specific distribution channels. So far, however, limited consumer interest and product development, both in terms of quantity and range, have held back the opening of specialised shops. Organic products are mostly sold in supermarkets and small, open-air markets like those of Bitola, Prilep, Rosoman, and Skopje.

On the basis of its climate and soil, Macedonia would have significant potential for developing the organic sector. The recognition by public institutions, demonstrated through growing financial support, is also an important step forward. What remains to be seen is how producers and associations will consolidate the supply chain and promote organic values among consumers.