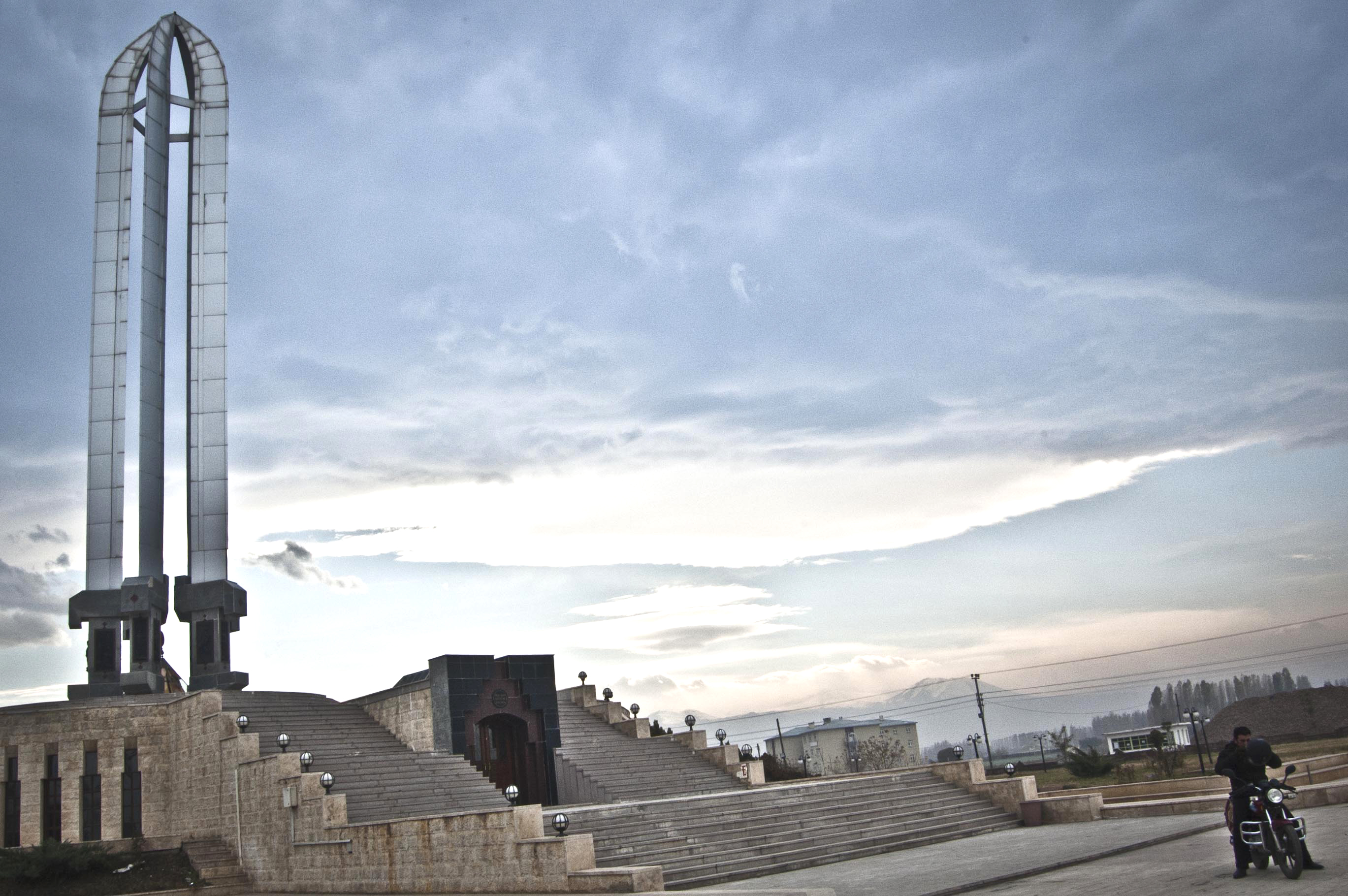 Igdir, museum of the Turkish genocide - photo by Paolo Martino

When a State is founded on a myth, that myth is to be defended at all costs. These words by an Armenian university professor come to Paolo’s mind while walking through the cold rooms of the Turkish Genocide Museum, in Igdir. Here, history becomes myth and the past is turned upside down. The seventh episode of the story “From the Caucasus to Beirut”

Five spears of marble and steel pierce the plateau’s sky, fading into the dense blanket of clouds. The swords are raised over Igdir, a Turkish-border outpost, invading the field of vision of those who look South, from the North, from Armenia, towards the bulk of the Ararat rock filling the horizon. At the foot of the monoliths a sign welcomes visitors to the Turkish Genocide Museum, inaugurated in 1997 in memory of the genocide perpetrated against the Turks by the Armenians. Even before entering, it becomes clear that, in this remote corner of Turkey - hanging onto the last strip of Anatolia-, memory, myth and history fully collide.

‘Starting in 1870, Turkey was the focus of international imperialistic ambitions. The Western States and the Russian Tsardom spread nationalistic ideas among the Armenians of Turkey, aimed at establishing an independent Armenian State in Anatolia and abolishing Turkey, both as a State and a Nation’.

The inscription is didactic, the rhythm assertive, the punctuation syncopated. ‘The genocide perpetrated by the Armenians against the Turks between 1870 and 1920 is compatible with the definition of “deliberately inflicting on the group conditions of life calculated to bring about its physical destruction”, contained in the 1948 Genocide Convention’. Abandoned at the extreme periphery of the plateau, the rooms of the Museum are cold and deserted.

In Igdir, at the crossroads between Turkey, Iran, Armenia and Azerbaijan, languages do not matter: they disappear in the universal language peculiar to border lands. Like Kars, in the North, and Van, in the South, until 1917 Igdir was part of the Russian Western periphery, attracting flows of Armenians from the regions of Anatolia subjected to the Ottoman Empire. Annexed to the Armenian Democratic Republic, after three years the city came under the rule of Kemalist Turkey, intent on expanding its dominions up to the right bank of the river Arax. On November 13th 1920, the withdrawing Armenians set fire to the Margara bridge, the only link left between Armenia and Anatolia. At the time, Igdir had a mixed population of over 10,000 inhabitants and was cutting the umbilical cord with its Armenian past.

‘Turkish soldiers whose stomach was burned and whose eyes were removed. Olba, province of Igdir, 1915’. A picture of two disfigured bodies opens the Museum’s first, gruesome photo exhibition. Men tied up by their legs, mutilated bodies, shapeless faces. The captions comment facts and report circumstances with absolute precision. ‘Ottoman soldiers murdered by Armenian armed groups on July 23rd, 1915, while they were on sick leave in the village of Koom’. Some pictures quote international witnesses: ‘Mr. Vays, German reporter, Mr. Estryan, Austrian, and Mr. Ahmet Rayf examine the bodies of massacred Turks’. The pictures, though, are a lot less precise than the captions: deciphering the shapes of the weather-beaten massed bodies is hardly possible through the black and white. The soldiers are not wearing uniforms. There are no external clues to identify the places: not a mosque, not a church, not a bridge, not a railway station that can be recognised. The foreign witnesses are just wondering shapes, with their backs to the camera, among dead people piled under the sun.

Tazegol, Subata, Ilica ,Sarikamis, Hasankale, Erzinkan, Hakmehmet. I write down the places of the massacres, the dates, the estimate of the 600,000 Turkish victims of Armenian violence. Disoriented, I try to stay focused on the absolute and irrefutable evidence, the mass killings documented by the pictures. By going deeper and deeper in these silent halls, though, I am overwhelmed by the background noise that has been with me since coming in: what story would these dead tell? The same story this Museum wishes to document? In the room shaped by the monolithic bases of the five swords - the heart of the Museum - a sign shows the anthropometric measurements of eight skulls found in the mass grave of Cavusoglu Samanligi. Cephalic indexes, cranial morphologies and ‘prominent studies on race’ show that ‘the history related to Armenians is to be rewritten, as the people massacred were Turks, not Armenians. Signed, Professor Dr. Metin Özbek’.

In one room there are publications by Turkish research centres, signed by university professors of history and anthropology. Using the language of propaganda, books such as “The Eastern Question: Imperialism and the Armenian Community” or ‘Armenian Church and Terrorism’ tell the stories of Armenian terrorists, arsenals sequestered from Armenian bandits, of agreements between foreign powers and Armenian traitors. Suddenly, the words of Hayk Demoyan, the Director of the Armenian Genocide Memorial interviewed a few days earlier in Yerevan, come to mind. ‘The Turkish State is not founded on a social pact, but on a myth. And myths are to be defended at all costs, even if it implies rewriting the past’.

The door to the room opens while I take pictures of the book covers, even though I know it is forbidden. A young boy in a uniform raises his voice while observing the scene. "Türkçe bilmiyorum!”. As soon as he sees I do not speak his language, the soldier changes his expression. Enthusiastic because a foreigner is in the Museum he is the guardian of, he hurries to prepare tea and a meal with yoghurt. No words are spoken, but the curiosity his eyes express is immense. When he understands my journey started in Armenia, he grabs a bunch of keys, closes the door to the Museum and gets on the motorcycle parked outside. His right hand gestures to climb on.

While the motorcycle slides into the cold air, I turn around to look at the monument towering over the plateau. Sarkan, the guardian, rides through fields set-aside for winter, along canals covered in ice, crossing shepherds sitting on the curb: Armenia, indiscernible on the horizon, unravels in perfect continuity with the surroundings. Sarkan speaks, gesticulates, mimes, praises his new motorcycle and invites me to ride it until I forget about the place of our encounter. At least for a moment, States’ monumental obsession for the past succumbs faced with the simplicity of a man. And Turkey and Armenia seem to be shifting from rivals into mere neighbours.

The Igdir night suddenly muffles every activity, laying down the human rhythms of a place that lives according to ancient beats. On the border, the meta-territory where identities blend and novelty is created, all blatantly precarious, fragile, hypocrisy-free. Muddy roads are ploughed by solitary elders on bicycles. Reinforced concrete mosques raise their minarets over unfinished houses. Off-road vehicles without plates shield themselves with the dark and the silence. In the alleys, where the banks of snow will only melt in spring, Azerbaijani, Iranian, Turkish and Georgian travellers meet to gamble on the same tables, get drunk from the same bottles, spend the night in the same brothels. Outside, winter cools down all noise.

The bus to Van is ready in the otogar parking lot, in the suburbs. There is nothing more to seek, in Igdir: here, Armenian history has left no traces, vanishing along with the Margara bridge. The driver suddenly switches the engine off, while the only passenger who speaks English translates what he is saying: ‘This bus is too big, I can’t drive through the ruins. The minibuses leave from the lots nearby, you can use the same ticket’. Crowding under the bus shelter, the passengers raise their eyes to a television. On the lower side of the monitor, confused among incomprehensible words, two terms flow which say it all: Magnitude 5.8, h21:23. For half-hour an hour now, Van no longer exists.