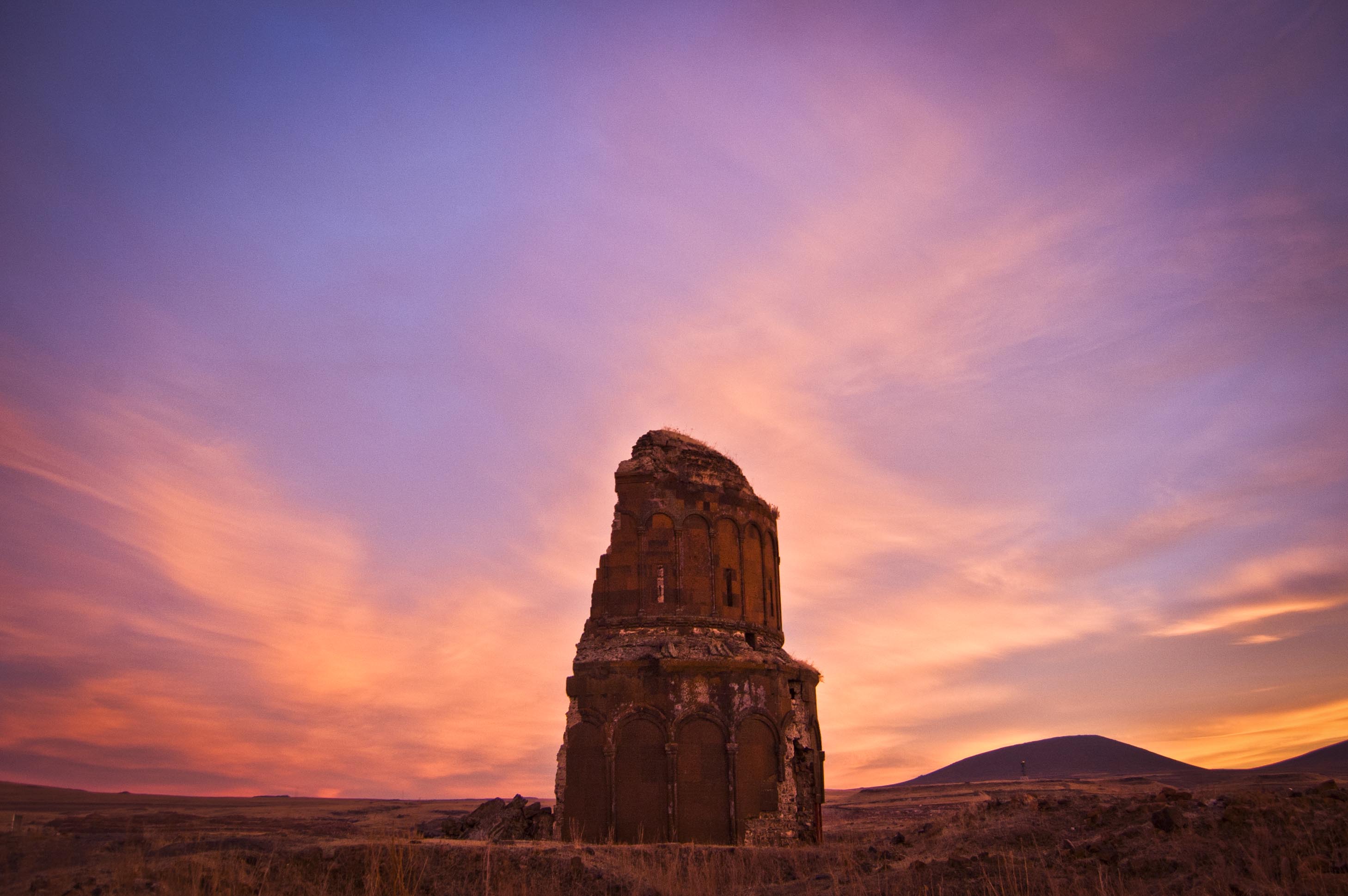 Turkey - Ani, Church of the Redeemer, photo by P.Martino

Desolate lands, where the mountains of the Caucasus descend towards the Anatolian plateau in big steps, and names come from politics rather than history. The sixth episode of our report “From the Caucasus to Beirut”

The customs officer unwillingly opens a cleft in the window of the sentry box. On the floor, a carpet of fresh snow swallows my footsteps, while daylight falls shines through the flakes. “Your car?” Where the Iron Curtain was standing up to twenty years ago, now what is left is only a cold customs officer. “No car”. With his fingertip on the glass, the soldier traces the distance from the border post to the first village: POSOF, 14 KM. A fourteen-kilometre march. He inidicates to sleep there, his hands joined under his cheek. “No, thank you”. The stamp is bangs down deafly onto page 34 of my passport. VALE BORDER POINT, 6/11/2011. “Welcome to Turkey, Mister”. I shake his hand before he withdraws it back into the warmth of his box and, until the dead of night, I am left alone with the crackling of virgin snow under my boots. It is the belated cry of the Iron Curtain.

I was born in Kars,

My homeland was the world

North-Eastern Turkey. The mountains of the Caucasus descend with big steps towards the Anatolian plateau, the immeasurable pasture of angora flocks, kingdom of the Kurdish dynasties, a corridor and valve between confronting continents. The road from Yerevan to Beirut winds through snowy lands to which politics, more than history, is busy giving names. Eastern Turkey, as shown on the atlas; Kurdistan, as the men and women living there call it; Western Armenia, according to the word of the Armenian diaspora. The scrupulous toponymy reveals aspirations to dominating a land that only belongs to the wind.

Kars appears at the end of a straight stretch of tarmac, the only pattern in the plateau’s monotonous morphology. Under Russian control until 1917, the Kars Oblast attracted a constant flow of Armenians, many of them survivors of the genocide. When the October Revolution withdrew the contingents stationed in the Empire’s suburbs, the Armenians took over the city, integrating it into the Democratic Republic of Armenia. Up to 1920, when the Turkish advance swallowed up half the newborn Armenian State, Kars was the capital of the Armenian province of Vanand. Today, high on the fortress a huge red flag with half moon and star on it flutters in sky breaking its metallic grey colour.

A railway track runs steadily through the prairie towards the East, without ever curving for about 70 kilometres up to Armenia. A 1-hour trip, if the border between the two Countries had not been closed for the past 20 years. On July 6th 1993, when the Turks shut it, the railway workers of both Countries wondered what to do with the locomotives left trapped on the wrong side of the barbed wire. Built in 1899, this was, for the rest of the following century, the only railway between NATO and the Soviet Union, the throbbing artery of men and freight between the two blocks sharing the world. To get here from Yerevan, it took me three days on buses, taxis and forced marches through solitary passes and snowy gorges of the Caucasus. 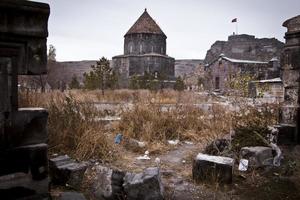 A slam on the brakes and the bus stops at the entrance of Kars. Eight soldiers stare the passengers straight in the eye, their fingertips on the triggers of the rifles pointed at eye level. The officer checking the documents shouts out a name, articulating each syllable clearly. The name echoes on the bus like an electric shock. A young boy walks down the aisle meeting compassionate looks. Handcuffed on his back, he meekly disappears on the prison van along with other prisoners. The bus starts again and the man beside me shrugs: “Turkish Jandarma”. Indeed, that name still resounding in my head. I.M. A Kurdish name.

From the top of the fortress, the camera has trouble focusing on Kars’ suburbs, suspended between fog and the prairie. But at the foot of the castle, clear is the image of the Armenian Cathedral of the Holy Apostles. Turned into a museum in the ‘60s, then into a mosque and then abandoned, the church is intact, despite its neglect. Rafi, my Armenian friend and child of the diaspora's words come to mind: “Armenians build schools and churches everywhere, then they disappear”. Uttered in Beirut, the sentence betrayed admiration for the Kurdish cause in Turkey, for their determination not to leave, for this people’s tenacious claims for autonomy. Before history turned its back on the Armenians, a century ago, the two minorities lived side by side in this region, part of a multi-ethnic empire that extended from the Balkans to the Persian Gulf. “Sooner or later – Rafi added – the Kurds will have their own State in Anatolia. With the passing of time, we are disappearing from the Middle East”

Days go by without talking, as the Kurdish winter starts. Among stands of spices and dried fruit at the bazaar, shepherds, hand labourers, merchants and farmers loiter, along with elders in traditional clothes: Kurdish alvars and dark vests on white shirts, Persian caftans, felt féz, tarbush streaked with gold. The variety of clothes and human features in this bordering strip of land recalls the linguistic richness of old times. Armenian, Turkish, Zazà, Kurmanji, Russian and a pentagram of languages cut back by Ankara’s fierce politics of centralization based on Turkish monolingualism.

Ani. The walls of the largest Armenian capital of all time surround nothing now. The pointed-arch door in the ramparts, shaped by the wind more than man, is the trompe l'œil in the constant recurring of the plateau. Gradually abandoned since the 16th century, with its 150,000 inhabitants, Ani competed, by splendour and fame, with Baghdad, Istanbul and Beijing. Persian and Arab caravans exchanged goods in its squares; Byzantine, Armenian and Russian pilgrims prayed in its sanctuaries; Caucasian and Asian routes changed course just so they could cross its doors. Today, among these cold ruins, the only traces of life are big oxen pasturing on the Armenian history and a young Kurdish shepherd tending to them with a stick and creative cries.

The apparent continuity of the land is broken as I proceed on what was the city’s trade axis. While the horizon is shaped by the mosque of Menüçehr, the Cathedral, the Redeemer and Saint Gregory Churches, the plateau is suddenly swallowed up by windy gorges. Down below, like an enormous scar, the bed of the Arax river marks Ani’s Eastern border. Beyond the canyon, again flat but at an altitude, from afar Armenia observes the open-hearted ruins of its ancient capital. Since 1920, the river has marked the border between the two Countries. After the Turkish-Armenian war, the prayers to leave at least that square kilometre to Armenian control were to no avail. Today, as then, sovereignty is not a matter of courtesy.

At this point of the plateau, where the sky is no less concrete than the earth, it is the vault of heaven that gives shape to things. Beaten by wind and solitude, Ani does not easily give up its remains. How can this be the land that nourishes the diaspora's myth of return? But when the sun disappears behind the low profile of the horizon, leaving behind it a secretion of red, the steel sky starts melting and Ani changes colour, going from grey to crimson. Somehow, the monuments go back to the eternity they were first thought for, before the age-old human work went missing. In this frozen moment, the ghost of the deported people populates this land again, fulfilling Sarop’s prophecy. And solitude turns into a privilege.

The bus to Igdir veers South. At night, the plateau throbs with its own light, a white warmth that from the snowy profile of the mountains drops down to the valley warming up the plane. The road unwinds in this meadow of light. Tonight Beirut is still far, but I miss it less and less.