Unesco's heritage: where in the Western Balkans? 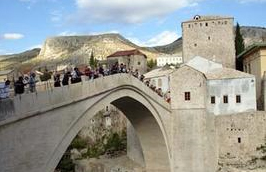 There are 911 Unesco heritage sites in the world. 18 of these in the Western Balkans. From the open plains on the island of Hvar to the Mostar Bridge, archaelogical sites in Albania and the Durmitor glaciers in Montenegro: a review

There are 911 cultural and natural properties on UNESCO’s World Heritage List. According to the World Heritage portal they include, a, “704 cultural, 180 natural, and 27 mixed properties” in 151 countries of the world.

Of these, 18 are in the countries of the Balkan region (today’s Western Balkans). Croatia tops the chart with 7 properties; Serbia has 4 including the ones in Kosovo which is not yet on the World Heritage List; Albania, Bosnia, and Montenegro each have 2, and Macedonia has 1 - the Ohrid region.

Most of the sites, 14, are cultural properties. Two of them are natural ones: the Plitvice Lakes National Park in Croatia, and the Durmitor National Park in Montenegro. One is mixed - the Ohrid region. One property only, the Medieval Monuments in Kosovo is registered as a cultural site in danger.

UNESCO's cultural heritage in the Balkans combines several kinds architectonic legacy. There are two bridges on the list and they are both in Bosnia; the Old Bridge in Mostar, and the Mehmed Pasa Sokolovic’s Bridge in Visegrad, so famously portrayed by Nobel laureate Ivo Andric in his book, “The Bridge on the Drina”.

Most of the properties on the list are “old towns”: Trogir , Dubrovnik, and the Stari Grad Plain (on the island of Hvar) in Croatia; and Berat & Gjirokastra (listed as one property) in Albania. The town of Kotor in Montenegro is listed as part of the “natural and culturo-historical region” of the Kotor Bay area. The “Historical complex of Split” features the Palace of Diocletian.

Several of the sites are cathedrals and monasteries. In Croatia there are the Episcopal Complex of the Euphrasian Basilica in the Historic Centre of Porec, and the Cathedral of St. James in Sibenik. In Serbia you will find the Monasteries of Studenica, and Sopocani (listed together with the locality of Stari Ras).

A few of the sites are archeological remains, such as Butrint in Albania, and the Gamzigrad-Romuliana, Palace of Galerius in Serbia. Butrint has existed since “prehistoric times” and after being a Greek, Roman, Byzantine, and Venetian city, it was abandoned in the middle ages. Gamzigrad-Romuliana, Palace of Galerius was built in the late Roman period (4th century AC) and it is considered unique for its “spatial and visual relationships between the palace and the memorial complex”.

The first properties in what was then Yugoslavia were put on the list in 1979: the Diocletian Palace, the Old City of Dubrovnik, Plitvice, Kotor, Stari Ras & Sopocani, and Ohrid. Ohrid was first considered a natural property, but was also included under cultural criteria the following year.

The most recent addition to the list is the Stari Grad Plain on Hvar, which was included only two years ago, in 2008. The year before, the World Heritage List accepted the Gamzigrad-Romuliana complex and the Mehmed Pasa Sokolovic Bridge in Visegrad.

Despite some of the sites being more or less famous than others, none of them need particular explanations. They are all protected by UNESCO on account of their unique contribution to, as the very name of the list tells, world heritage. For example, the historic centres of Berat & Gjirokastra have been “inscribed as rare examples of Ottoman architecture”. The town of Trogir on the Croatian coastline was accepted on the list as “a remarkable example of urban continuity”. The World Heritage List has justified its inscription with the fact that it is a “medieval town ... that has conserved its urban fabric to an exceptional degree and with the minimum of modern interventions”.

The Stari Grad Plain on the island of Hvar is considered unique because of its exemplary Hellenic “land organization system” which is “based on geometrical parcels with dry stone wall boundaries”. On the Stari Grad Plain’s landscape, the World Heritage portal reads, that it “has remained practically intact since it was first colonized ... in the 4th century BC”.

The mountain of Durmitor in Montenegro has been listed on account of the “breathtaking” beauty the nature around it, “formed by glaciers and ... traversed by rivers”, with the Tara river's deepest gorges in Europe”.

The town and region of Ohrid, according to the World Heritage portal, is “one of the oldest human settlements in Europe”, and “it has the oldest Slav monastery (St Pantelejmon)”. Ohrid’s icon collection “is considered the most important collection of icons in the world” after the one in the Tretiakov Gallery in Moscow.

The Cathedral of St. James in Sibenik, “built entirely from stone” and with “unique construction techniques”, “bears witness to the considerable exchanges in the field of monumental arts between Northern Italy, Dalmatia and Tuscany in the 15th and 16th centuries.”

Finally, the Old Bridge Area in Mostar, “with its pre-Ottoman, eastern Ottoman, Mediterranean and western European architectural features”, is considered “an outstanding example of a multicultural urban settlement”. Recently reconstructed, after being destroyed in the Balkan wars of the 90s, today according to UNESCO it symbolizes “reconciliation, international co-operation and ...coexistence...” If you are young and brav, a dive from it makes a lifetime experience. For the rest of us, just sitting by and watching it, fills our need for beauty for a month to come.