Ohrid and its lake, a UNESCO heritage in danger 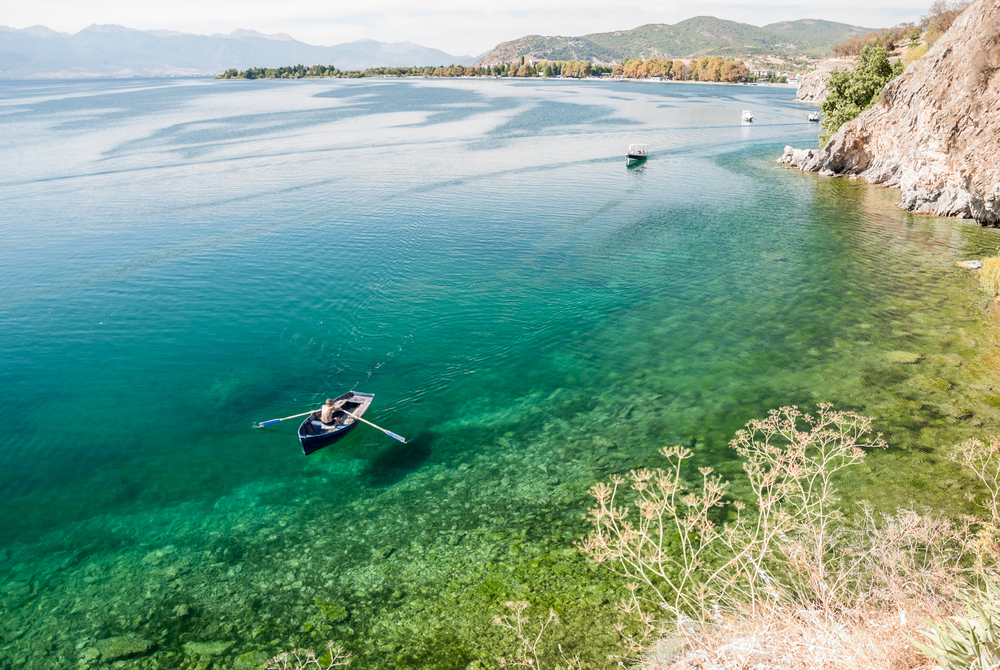 Ohrid and its lake represent an exceptional heritage of art, history, architecture, and nature, part of the World Heritage List since 1979. However, due to illegal construction and pollution, it may end up in the list of endangered locations

The UNESCO World Heritage List includes sites of outstanding universal value which meet at least one out of ten cultural or natural criteria. The Lake Ohrid region meets four – but, more importantly, it is amongst those 39 world sites that display both cultural and natural significance.

The city of Ohrid is protected for its cultural importance and the Lake Ohrid for its natural uniqueness. The town meets three cultural criteria: it represents a masterpiece of human creative genius; it bears a unique/exceptional testimony to a cultural tradition; and it has an outstanding example of a type of building or architecture. The Lake Ohrid is regarded as an area of superlative natural phenomena, exceptional natural beauty, and aesthetic importance.

The situation, though, has changed through the years. Decades of urbanistic miscarriage and rampant urbanisation have jeopardised Ohrid's status of world heritage site. On the 43rd session of the World Heritage Committee, held from June 30th to July 10th, 2019 in Baku, Azerbaijan, the Ohrid region received a last warning.

The UNESCO report presented 19 recommendations to be addressed no later than February 2020. Some of them are already fulfilled, some almost are, but some remain pending. One of the key recommendations is tackling the urbanisation problem. After several delays, the municipality of Ohrid announced that it will start razing illegal buildings by the end of September. But the question remains – will it make it by February 2020?

Located on the border between the Republic of North Macedonia and Albania, with an estimated age of around three million years and a maximum depth of 300 metres, lake Ohrid is one of the oldest and deepest natural lakes in Europe. The Macedonian side of the lake, with its shorelines, was first protected by UNESCO for its natural conservation value in 1979; the city of Ohrid, for its cultural heritage value, a year later.

The town of Ohrid is one of the oldest human settlements in Europe and a testimony of Byzantine art, with more than 2,500 square metres of frescoes and over 800 icons of worldwide fame. The churches of St. Sophia (11th century), Holy Mother of God Perivleptos, and St. John Kaneo display a high level of artistry in their frescoes and theological representations by local as well as foreign artists. The Lake Ohrid region boasts the most ancient Slavonic monastery and the first Slavonic University in the Balkans – the Ohrid literary school that spread writing, education, and culture throughout the old Slavonic world.

The lake itself is in the UNESCO list for its history dating back to pre-glacial times, but also because of a superlative natural phenomenon: its oligotrophic waters contain over 200 endemic species.

So far, the protected area included the part of the lake located in North Macedonia. In Baku the area was extended to include the part located in Albania, stretching in both countries to 94,728.6 hectares, with a buffer zone of 15,944.4 hectares. It now includes the whole lake and the surrounding towns of Ohrid, Struga in North Macedonia, and Pogradec in Albania.

What needs to be done?

The UNESCO report states that “the town of Ohrid is reasonably well preserved, although uncontrolled incremental interventions have impacted the overall form of the monumental urban ensemble as well as the lakeshore and wider landscape. The region is also vulnerable to major infrastructure projects and other developments in both countries”. The report stipulates that the main threats to the integrity of the area include uncoordinated urban development, inadequate treatment of wastewater and solid waste, and tourism pressure as well as a number of other issues.

Therefore UNESCO recommends that both North Macedonia and Albania strengthen and coordinate legal protection. The coordinated actions, among other things, should extend the treatment of sewage around the lake; establish a moratorium on any urban and coastal transformations until all relevant planning documents have been finalised and adopted; create an inventory of illegal constructions; and proceed to demolishing all those which represent a threat to the area.

The to-do list is clear and consistent, but the situation on the ground is not. Although the States Parties need to submit an updated report for examination by the World Heritage Committee, by February 1st, 2020, the demolition of the illegal constructions has not started yet.

Ohrid mayor Konstantin Georgieski recently said that the municipality has finalised the inventory of illegal constructions. It turned out that there are 1,076 illegal objects in the municipality, including 409 in the protected area. “Priority will be given to the illegal objects in the old nucleus of Ohrid and national park Galicica. They will be the first to be demolished”, Georgieski said, adding that there are around ten such objects.

Regardless of the good intentions, the status quo on the ground is quite unpromising. It is chaotic and burdened with political bargains. A perfect example is the recent scandal with an illegally constructed pizzeria in Ohrid’s old town, owned by no other than town councillor and local businessman Nefi Useini. Useini, a member of the government coalition junior party DUI, refused to demolish the object, claiming that it is legal. He even threatened state inspectors and insulted journalist that reported on the matter, local media reported.

To make matters worse, the pizzeria’s opening ceremony was attended by Useini's DUI colleague and mayor of nearby Struga, Ramiz Merko – the same mayor that needs to comply with UNESCO recommendations, as Struga is also part of the protected area. But, regardless of the obligation, Merko claims that there are no illegal buildings in the municipality of Struga, although the media report that there have been more than 10,000 requests for legalisation since 2011. And this is not all – Useini also owns a concrete production plant in the protected lake area in Daljan, near Ohrid.

Several NGOs, alerted by the recent developments and the blatant political interference, reacted to the proposed draft law on protection of the Lake Ohrid region. Namely, the government is planning to create an advisory council for protection of the Ohrid region. Among other things, the proposed draft law envisioned that this 15-member body, formed by experts and representatives from relevant state bodies, will include a member appointed by the newly created Ministry of Political System and Inter-Community Relations and will govern with the qualified majority.

According to Ana Cholovikj-Leshoska, from the NGO Eko-svest, this is another bug in the system – a leverage that will be heavily exploited for political and business pressures to the detriment of ecological protection. “It is unclear why there is a need for such provision as the council will have consultative role and not legislative nor binding role”, said Cholovikj-Leshoska to the local media.

There are a few more months to see whether the Lake Ohrid region will become a success story, or will be inscribed on the UNESCO list of World Heritage in Danger. If the latter happens, beside the negative publicity, it will not necessarily be bad, as some NGO activists pointed out, as experts from all around the world would be included in the restoration of the region. In this case, they add, political machinations will be impossible.