The Other Side of the Balkans: Cultural Heritage in Macedonia 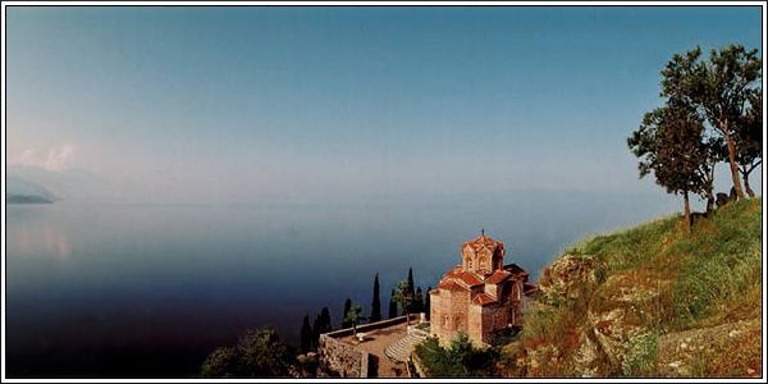 There has been quite a lot of talk lately of re-branding the image of the Balkans by acknowledging that it is capable of producing not only wickedness and that it can contribute or be the home to also good things.This article is a small contribution in this direction

In the past years the Balkans came to be a derogatory term - a word associated with generally negative notions of violence, disorder, poverty, corruption, crime. For years before that it was not in use - but a famous derivative of his had been coined in the time after the World War I when to "balkanize" meant to break into small, mutually hostile entities (Webster dictionary). What goes around comes around.

Nowadays it is an undesired label; common to a sad group of countries connected above all other things by common misery. The Croats dislike being associated with the Balkans and have a general resistance to being identified by it. Similarly the Greeks.

There has been quite a lot of talk lately of re-branding the image of the Balkans by acknowledging that it is capable of producing not only wickedness and that it can contribute or be the home to also good things. Enthusiasts point out that both the Olympics and Mother Theresa in fact came from the Balkans. This article is a small contribution in this direction.

A local astronomer, Jovica Stankovski discovered a megalithic observatory a couple of years back nearby the village of Kokino in the northern part of Macedonia, by the city of Kumanovo. The discovery was relatively unnoticed by the public until the beginning of this year when the US space agency NASA produced a ranking of ancient observatories and placed it fourth oldest ever, after Abu Simbel in Egypt, Stonehenge in Britain and Angkor Wat in Cambodia. The observatory is around 4.000 years old, which means it dates back to the Bronze Age and what makes it really special is its fine precision preserved even until today.

"The astronomic observations from the observatory had been conducted for several purposes" says astronomer Gjore Cenev from Skopje, "first for creation of a calendar. This is what the marking of the positions of the Sun and the Moon was for. Practically, it had also served to set the time for harvests, shepherding of the livestock, or performing of certain rituals."

Experts further say that it is unique of its kind in Europe and that it can still be used today.

Astronomers and archeologist reckon with the possibility of several other observatories of this kind existing in the region. For the time being the site is only visited by the local population. Astronomers hope that with its popularization the site will gradually become an international attraction.

Back in 2002 during excavations around the site of the Samoil Fortress in Ohrid a golden mask was discovered which excited the Macedonian public. The mask dates from around 5 century B.C. and probably served purposes of burial. Several other golden items were discovered with it such as gloves and necklace. The reason for the archeological excitement was the similarity of the mask with the famous Trebenista masks. Trebenista is a village around 20 kilometers away from today's Ohrid and its is the site where 4 other such masks had been discovered 100 and 70 years ago respectively, two at a time, now owned by Bulgaria and Serbia.

According to archeologist in charge of the excavations, Pasko Kuzman, " the mask is a monumental discovery that sheds additional scientific light in the mystery of the Trebenista case".

"Via Ignazia passed through here" Kuzman says, "and other important routes connecting the eastern with the western world. Phillip II and Alexandar had left tremendous treasures around. The discovery of the mask can serve as an evidence to refute the theory that Lihnida (the ancient name of Ohrid) was a city of the Ilir culture. It was a Macedonian centre instead".

One of the first people to see the mask at the time of its discovery was the now late president Boris Trajkovski who brought foreign officials to see the artifact. An attempt was made at the time of the discovery to do a joint regional exhibition of all 5 masks, including the two in Belgrade and Sofia each, but the motion failed.

Vinica is a small town in the eastern part of Macedonia. It hosts the archeological site of an ancient fort from around 5 century B.C. Excavation work was conducted several years back but had since been halted due to lack of funding. During the work done in 2002, an old terracotta icon was discovered dating from the period of early Christianity around 3 century of the new era.

The icon is dedicated to the saint St. Andrew and according to experts is of crucial value to the beginning of Christianity in the region.

"The icon from the fort of Vinica, with its particular content and symbols, is in my knowledge the only known artifact of its kind, not only in the early-Christian art in Macedonia and the Balkans but also Europe" says professor Kosta Balabanov, the person who discovered the icon.

Balabanov sees the importance of the icon in the fact that it probably comes from a period when Christianity was still unrecognized as a religion in the Roman Empire. "It was first emperor Constantine who in 313 recognized the Christian faith, and it became the official state religion much later. The fact that the icon originates from this period of time, and perhaps even earlier - makes it fundamental".

Balabanov does not hide his discontent with the lack of interest by competent authorities to invest in further archeological research. The icon has been stacked in the National Museum without much follow up.

"If the wild diggers do their job consciously" says he" we will one day have to find the money the buy out the terracotta icons from the people who will have had them".

Wild digging as it is referred to, or illegal excavation at known or still unmarked archeological sites is a profitable business in Macedonia. Ancient items are smuggled out of the country and into the western markets which have both the appetite and the ability to pay. Modern diggers are well equipped and specialized in their trade and well organized logistically.

Recently public controversy surrounded the lease of an ancient amphitheatre near Bitola for the purpose of a private VIP wedding. The site had been leased for a relatively small amount of 500 euro to be paid in kind by donation of a color photocopier to the Department for Protection of Cultural Monuments. The director defended earnestly his decision and called for promotion of "cultural tourism". The media were by and large critical of the idea.

The Balkans has things to offer beyond political instability and crime. And hopefully time will come when they will be both appreciated and known better. In the meantime - come and see them.