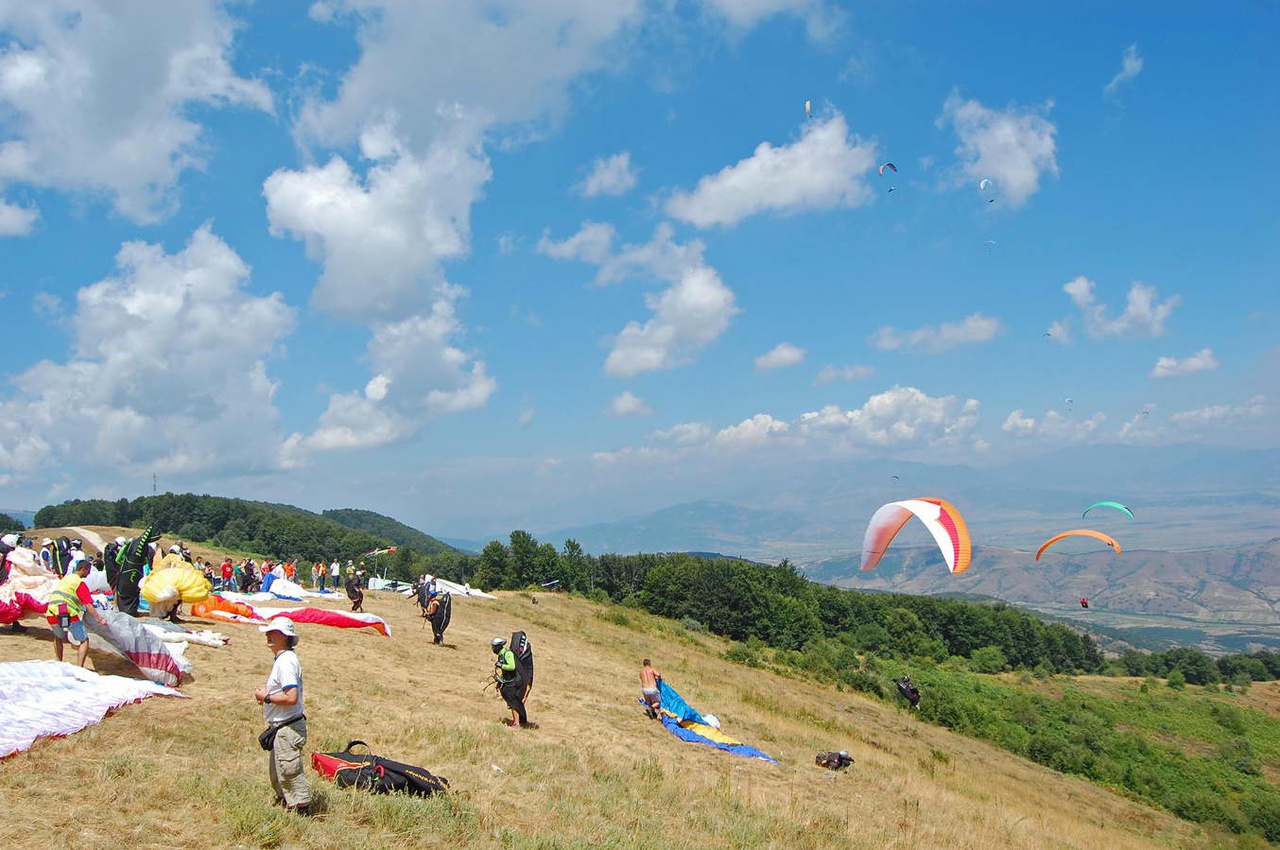 Macedonia’s highest city is the ideal environment for the vital paragliding community in the country, but barriers remain for it to consolidate as a destination for alternative tourism

Nested high in the mountains, at the average altitude of around 1,350 metres above sea level, Kruševo overlooks the Pelagonia Valley and its two major cities – Bitola and Prilep. This small town of less than 5,000 inhabitants, situated in the southwest of the Republic of Macedonia, is rich in history, well-preserved 19th-century traditional architecture and beautiful nature. But what makes Kruševo even more unique is the potential for a first-class paragliding experience for pilots of all levels.

Talking about tourism in Macedonia almost always leads the conversation towards Ohrid. The Ohrid Lake and the town of Ohrid are protected by the UNESCO as a world natural and cultural heritage site – the lake was listed for its environmental value in 1979, and the town for its cultural value a year later. Therefore, it is no wonder that the Ohrid Lake is considered as the main tourist site in Macedonia. However, over the last few years, so-called alternative tourism is thriving as one of the possible areas for further economic growth. Together with hiking, biking, and ecotourism, paragliding is among the most promising areas for development of the country’s alternative tourism.

Kruševo and its paragliding opportunities were recently listed as one of Macedonia's top natural and historic treasures by National Geographic. In the top-ten list, right after the Ohrid Lake and before the painted mosque in Tetovo, Kruševo's “prime conditions for paragliding” are emphasized. The town's gifts have recently been celebrated also by the web-magazine Cross Country , a specialised publication for paragliding, praising Kruševo’s ideal environment.

“Unusually, the town sits in a natural bowl on the ridge top, so launch is an easy walk from there. The grassy take-off sits above wooded slopes that drop down to the Pelagonia plain, stretching south to the Greek border”, reads the web-magazine, adding that the best flying conditions are from June to September. In case of bad weather or family vacations, attractions for the non-flying tourists include “several museums, the Ilinden uprising monument, monasteries, and the ruins of the Roman town of Heraclea Lyncestis in the town of Bitola”.

Also, “in the mountains there are good mountain-biking trails and Prilep has become known as one of the best bouldering areas in the world”, the author adds, pointing out the capacities for cheap accommodation with plenty of guest houses and hotels, not to mention the many cheap eateries.

Local paragliding websites advertise Kruševo as one of the world's most attractive places for cross-country paragliding, highlighting the “unspoiled nature”, the quality of food, and nice accommodation for the pilots, “much cheaper than any other European location”.

Baki Shakirovski, a paraglider since 1994 and former leader of the Macedonian national team, confirms that Kruševo is regarded as one of the world's better established paragliding locations, but it is not the only one in the area. According to Shakirovski, Popova Šapka at Šar Planina near Tetovo, Vodno and Skopska Crna Gora near Skopje, and mountain Galicica between lakes Ohrid and Prespa are also excellent locations for paragliding.

“Macedonia has plenty of sunny, calm days. The infrastructure is good and landing zones are well connected with the roads”, explains Shakirovski, who describes Macedonia's flying community as “a small, but vibrant”, with “paragliding clubs in every major town”.

One of these paragliding clubs is Vertigo, in Skopje. Member Sasho Smilevski argues that further developing paragliding tourism would require a set of institutional measures.

“All taking-off and landing spots need to be registered at the Civil Aviation Agency. Also, all spots should be properly levelled and marked with information tables".

Smilevski also points out that Kruševo is recognised as a first-class location and stresses how it offers a lot to do for the whole family as well as for flyers.

“Kruševo, together with the near sites like Ohrid, Bitola, and the national park of Galicica, can offer an active vacation for the whole family. Tourists who are not professional paragliders can experience tandem flying above the lakes or enjoy swimming. In this category last year we registered around 1600 stays”, Smilevski said.

Vladimir Barakovski, president of the Aeronautical Federation of Macedonia, points out that Kruševo hosted the 2016 European championships in both hang gliding and paragliding. “It will also host the 16th World championship in August 2019. This is evidence of the huge potential of Kruševo and Macedonia in this sector”, Barakovski said.

For paragliding tourism to be at the top level, investments are needed besides the natural beauties. Unfortunately, “institutions are not investing enough for the development of this sport and the promotion of Macedonia as a destination for flying”, concludes Barakovski.

With this fully-fledged set of locations and actors nurturing the culture of paragliding in the country, it is no surprise that the President of the Paragliding World Cup association (PWC) is Macedonian Goran Dimishkovski, who now lives abroad.

In an e-mail conversation, Dimishkovski confirmed the country's assets – the low prices which make it very affordable for flying, the climate, and the nature. But that is not enough.

“Kruševo has the potential to grow into an important destination for paragliding, but unfortunately it hasn't yet”, Dimishkovski points out.

At the same time, he was highly skeptical towards the possibility of further development of paragliding tourism.

“With the well-known mentality and attitude towards tourists and tourism in general, I could say that there is almost no hope for further development of paragliding tourism. What we lack is education, infrastructure, investments, respect towards experts, etc.”, Dimishkovski concludes.