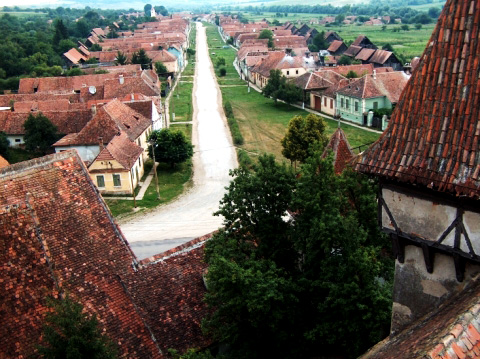 Part of a fragile and precious heritage, the Saxon villages of Transylvania are undergoing a dramatic transformation; the product of Romanian emigrant remittances and lack of official regulation. But with this transformation comes the risk of destroying an irreplaceable source of touristic and cultural potential

Sibiu is a kind of Bruges of the East, with well-preserved and coherent centuries-old architecture strewn along winding cobblestoned pedestrian streets. In 2007, this mid-sized town in the Northwestern region of Romania (famously known as Transylvania) was spruced up and subsequently granted the status of "European Cultural Capital" by the European Union. Cities in the northwest and west, like Cluj, Oradea and Timisoara, boast an architectural legacy spanning the Gothic and the Bauhaus periods, with Austrian Art Deco (Secession) being represented with very original contributions.

Yet, in rural Transylvania, the trained eye experiences architecture inherited from the Transylvanian Saxons (Siebenbürger Sachsen), a Germanic population originally from parts of Germany, the Benelux countries, and France. With over one hundred villages with monumental fortified stone churches, handmade roof tiles, yards enclosed with high walls, and sculptured massive wooden gates, rural Transylvania offers a most unique sight. The region is far from Tuscany or the Loire Valley, but villages like Biertan, Viscri-Deutschweisskirch, and Mălâncrav-Malkrong are not only architectural jewels for cultural tourism, but also offer the green tourist and the slow food enthusiast breathtaking vistas, artisanal food and organic agriculture.

The region is stupendous enough to have compelled the Prince of Wales to purchase two Saxon homes and become a regular visitor. Yet the potential of the region to generate tourism-based rural development has been dramatically affected by the sociological aspects of Romanian migration to Western Europe and by broken municipal and central governments. In the past few years, UNESCO World Heritage status - which protects only six of the 148 Saxon villages - and isolated acts of patronage have been the sole obstacles in the way of the sweeping destruction or radical alteration of Saxon village architecture.

Following World War Two, a thorough Nazi-ordered evacuation, Soviet deportations, and voluntary migration to Germany reduced the Saxon population from nearly one million in 1938 to roughly 20,000 in 2002. Poor ethnic Romanians and Roma moved into the deserted Saxon homes and, due to the persistently low cash incomes of Romania's national-Stalinism (1948-1989), the most recent inhabitants left most of these buildings unscathed. This began to change with mass migration from rural Transylvania, a process that began in the late 1990s and was spurred by unemployment and the misery of subsistence farming. As a result of migration, for the first time in Romania's social history, rural Romanians transitioned from underclass to middle-class consumption levels in less than a decade.

With real estate prices in Transylvanian cities skyrocketing to levels near that of Western Europe by the mid 2000s (in part due to migration itself!), most rural immigrants invested their savings in improving the comfort of the family home or, in most cases, rebuilding it. As a result, improved heating, indoor plumbing and long-distance communication became widespread amenities for the first time in the modern history of these villages. Simultaneously, this building boom fed interesting social status dynamics. Migrant families emerged and formed a distinct social stratus in village society and created markers of cultural distinction that largely revolved around building big and flashy structures.

Despite the upward mobility of much of the able-bodied population from these areas, mass migration meant unmitigated disaster for heritage Saxon architecture and, with it, the chance for these communities to capitalize on the touristic potential of their postcard-perfect villages. In less than a decade, many of the spacious, stone-made, tile-roofed heritage homes built over several centuries and in accordance with the strict customary codes of the Saxon communities were converted into 'modern' dwellings. The modified homes featured plastic doors and window frames, asbestos-cement or tin roofs, stainless steel railings and gaudy façade paint, according to the repertoire of local master masons and the improvisations of their customers. In some cases, this new wealth paid for new, reinforced concrete, faux Byzantine-style churches whose construction doomed the half-a-millennium-old fortified Gothic churches to ruin.

With this new 'bling' residential and ecclesiastical architecture came the slow death of local organic cuisine traditions that could have added to the region's touristic portofolio.

Standing in front of his six-bedroom, three-story house in Dumitra, Grigore Pop, a 34-year-old who works abroad as a cargo truck driver in Girona, Spain, says that he bulldozed the old Saxon house he inherited from his grandparents.

"Look, people here have fond memories of the Saxons," Mr. Pop says. "They built solid houses and there was plenty of room to for me and my wife in it. And I know that in Spain the state doesn't let you change a single window if it is not an exact copy of the old one. But that's Spain, and this is Romania and my cheek would crack with shame if, after 8 years of sweating away like a beast of pray in Europe, I wasn't able to build a new house. The old house reminded me of poverty and no running water and old things. So I knocked down the old thing and built this 'ship' that I don't even like. But, really, the only old houses left in the village belong to the village drunkards." Asked whether he even considered restoring the old Saxon house, he laughed away the idea with a local proverb about 'the sad fate of village eccentrics.'

Apart from nixing rural Transylvania's potential for tourism, the high cost of the development of these local 'McMansions' relative to the relatively low incomes of migrants reduced the potential for remittances to serve as small business capital for tourism-specific activities. The average cost of a standard 'McMansion' ranges between 50 and 80 thousand euros. To save that amount, the average migrant household needs to save for almost a decade. This leaves slim prospects for the formation of the kind of virtuous circles which connect migrant remittances, local culture and sustainable development in places such as Italy, Spain, Greece and, more recently, Turkey.

Instead, Saxon Transylvania happened upon a banal real estate bubble that benefited dealers in (largely imported) construction materials, rubber stamp architecture committees, and self-employed construction workers. Since most self-employed construction workers work in the informal labor market, and given that new construction is barely taxed, near-bankrupt municipalities experienced little change in local tax revenue. The only way to skim some public revenue from these developments was the levying of the VAT on building materials, a tax that is generally well-collected in Romania but that has no direct effects on the political economy of the village itself.

Certainly, Romanian building and refurbishing codes prohibit significant changes in constructions listed as worthy of preservation. While these codes have begun to be (timidly) enforced in cities in the past few years, they have seen almost no enforcement in rural Transylvania. In part, this lack of enforcement has been due to the fact that heritage lists are largely limited to public buildings and village churches. At the same time, with few exceptions, rural municipalities and local communities show no interest in architectural preservation. On the contrary, municipalities often initiated and sustained the mayhem by using EU rural development funds to tear down - or leave to decay - the remaining 19th century town halls and schools and erect cheaply-built, 'modern' facilities in their stead.

While it may be tempting to blame this self-defeating practice on the sheer shortage of cultural capital in rural municipalities, the more robust explanation would point to the increased opportunities for electoral gain and rent extraction made available to local mayors through the construction of new buildings.

In a village not far from Bistrita, one of the oldest Saxon settlements in North-Eastern Transylvania, the stately, stone-made, Saxon-era school was abandoned by the municipality and a new school built with cheap materials paid for by an EU rural development program was erected in the historic school's backyard. The local mayor has a reputation for graft, yet new buildings like this contributed to his repeated reelection.

Alexandru Braicu, a native of Cepari, is as direct as one can be about this situation. "The mayor sullied his hands with dirty money countless times," Braicu says. "Everybody knows. He charges 10% for all auctions. But they all steal when they are in office anyway and at least he brought us running water and built a new town hall and schools with money from Europe. "In Nasaud a neighboring small town the mayor built nothing new, even though Nasaud is a town and we are but a worthless village. So how can we be so stupid as not to re-elect the mayor again?"

As for the central government's role, the emerging pattern supports a combination of 'post-regulation' (legalizing the construction after it is built) and studied indifference. This combination may seem particularly intriguing as, relative to other Balkan countries, Romania has a long tradition of town planning dating back to the 19th century. Unfortunately, after 1989, planning commissions became mere opportunities for rent-seeking and evisceration of the capacity of the state to regulate. That this tradition simply evaporated in less than a decade after 1989 and made room for the 'turbo-urbanism' that plagues Romanian cities and villages alike is testimony to the destructive legacy of indigenized neoliberalism: the cohabitation of a radicalized, pro-deregulation ideology and mutant neo-patrimonial relations within the state.

Evidently, the Ministry of Culture funded the restoration of a handful of churches and trumpeted a few development strategies for the Saxon regions. But one can safely assume that the performance of the Bucharest government in achieving anything systematic in this regard will hardly look better than its cringe-inducing record of letting 'market forces' wipe out more of old Bucharest's splendid architectural legacy than the ill-famed bulldozers of Nicolae Ceausescu's regime.