Slow Food Romania: the Saxons and the Bazna pig 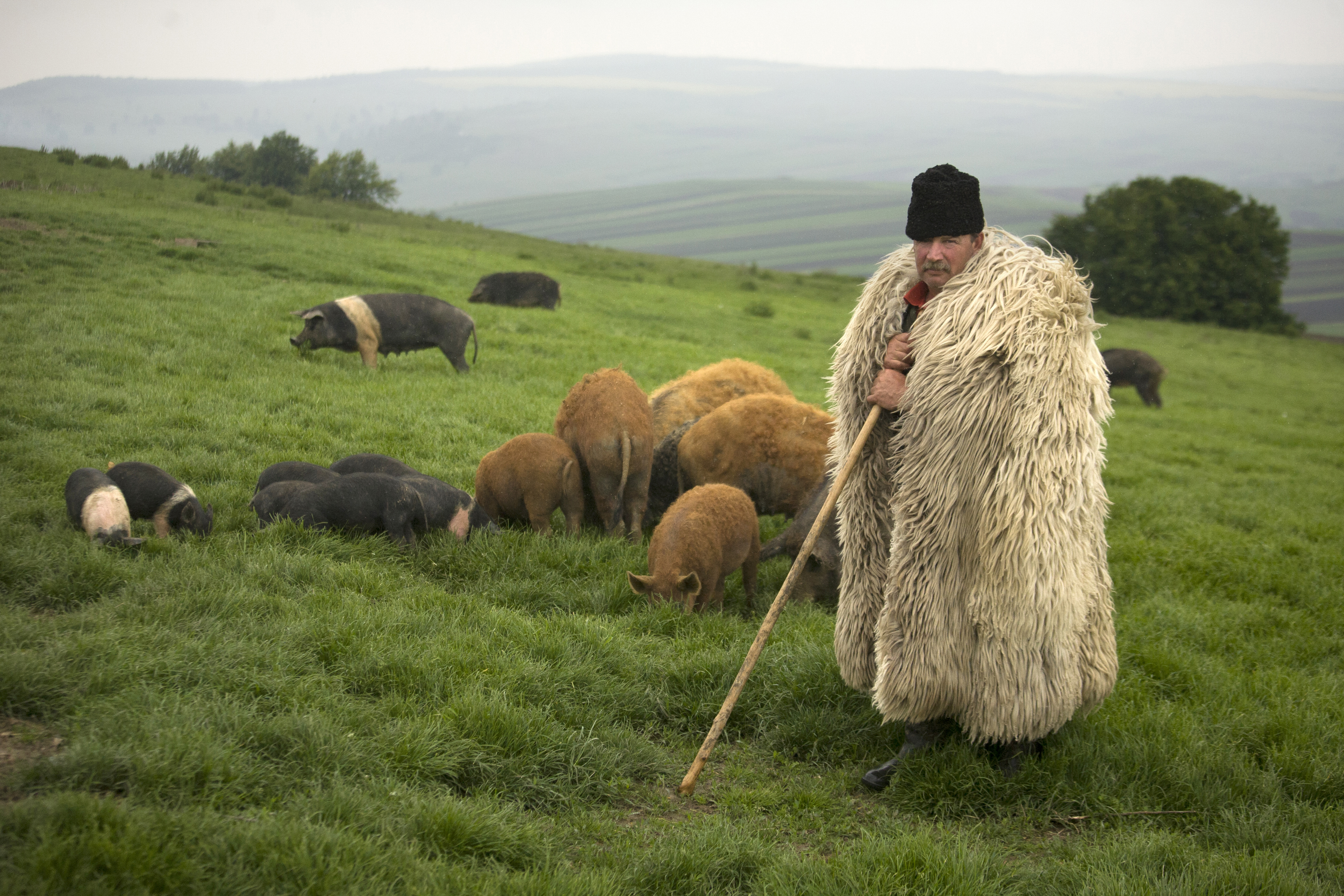 The Bazna pig was born and bred in the late 19th-century Transylvania. Today, after the Saxon community that had selected it emigrated, the pig is likely to disappear as well

"The best things are often born by chance or a quirk of fate. And so was our pork". Together with Albert Binder, I climb along the wide staircase up to the fortified ramparts of St. Nicholas church. We are in Bazna, a Saxon village lost in the timeless landscape of Romanian Transylvania. We climb slowly, following the rhythm of the story, surrounded by the intoxicating aroma of spring, flowers and freshly mown hay.

"It was 1872, a time of revolutionary changes: the Budapest-Bucharest railway line was under construction. Two British engineers – so I was told – came to the baths of Bazna to rest and relax, and Michael Herlich, then director of the spa complex, showed them around the village. Chatting got to the local pigs, the 'mangalita', of tasty meat, but rather small and slow breeders".

Once reached the imposing clock tower, we take a little break. Albert extracts from a leather pouch a huge wrought-iron key and makes the oak door deadbolt sing several times.

"Before leaving, the engineers promised Herlich that, back home, they would send a pair of Berkshire pigs, known for the large size and the quality of their meat. And they did. However, during the trip from England, the sow died. Only the boar made it to Bazna, so there was no other choice but to get him to mate with 'mangalita' sows. And so, from this unexpected union, our 'porc de Bazna' was born, to be improved in the following decades thanks to a careful selection process".

After opening the heavy door, Albert guides us into the Saint Nicholas complex, a typical Saxon building with sloping roofs, covered with vermilion tiles that resemble the scales of a snake. From the top of the tower, our eyes meet the hallmarks of the villages created over the centuries by the Saxons of Transylvania: gentle pastel facades, placed neatly side by side along the soft design of the streets, following the intertwining of streams crossed by countless bridges. The red silhouettes of the roofs of Bazna look like long ships anchored in the harbour, which seem to pitch to the breeze of May in the vegetable sea of the Transylvanian countryside.

Time seems rarefied, and the view is probably not very different from that enjoyed by the two engineers of Her Majesty. The human landscape, however, is now radically different. In Bazna, which now counts about 1,600 inhabitants, Albert is one of the 4-5 remaining Saxons – German-speaking farmers from Luxembourg and the Rhine Valley, invited to Transylvania in the 12th century by the Hungarian King Géza II.

"Bazna was an island of German culture for 800 years. Our community endured countless crises, but not the cataclysms of the 20th century. In the 1940s, 80% of the inhabitants were still Saxons. Then came Hitler's madness, to which many of our fathers unfortunately paid heed, followed by mistrust and oppression of the communist regime. And when Ceausescu died, almost everyone decided to seek a better future in Germany".

At the beginning of the Nineties, with the dissolution of the Saxon presence in Transylvania, also the Bazna pig, strongly linked to this community, was in danger of disappearing. "Just then the controversial discussion began on the risks, real or imagined, of cholesterol", explains Ben Mehedin, food and community expert of the Adept Foundation, Slow Food's partner in the area. "The Bazna pig has a strong component of fat meat: for this characteristic, much appreciated since its creation, it suddenly became less attractive and demanded by the market, which is now looking for more lean meats. Soon, the 'porc de Bazna' turned from a widespread breed into a real rarity".

Ben and I leave Bazna and head to Bojan, a Saxon village a few kilometres away. After the village and its turreted church, we follow the dirt road that climbs the hills, punctuated by the dark foliage of oaks and walnuts. "Today the Bazna pig has been rehabilitated, thanks to the awareness that cholesterol is not necessarily dangerous: recent studies have shown that its meat has a fat component rich in high-density lipoprotein, the so-called 'good cholesterol'", says Ben when the car stops in the open. "The local government promoted the first festival dedicated to the pig and its products, and to date about twenty manufacturers have joined, creating the first organisation for the protection and promotion of the 'porc de Bazna' last year". Today, many Romanians are trying to revive the breed they inherited from the Saxons. According to Ben, however, there are some challenges, the most difficult having to do with the difficult preservation of the unique genetic characteristics of the Bazna pig, which in recent decades have been largely dispersed with uncontrolled intersections.

We descend and start to walk on the grass, still wet with dew. Suddenly, from a dip in the ground, a bunch of pigs appears at light trot. Some are 'mangalita' – of nervous profile, similar to wild pigs, and covered with a thick layer of dark fuzz. One of the sows and the majority of piglets, however, carry the unmistakable signs of the Bazna pig. The first and most easily identifiable one is the pattern of the fuzz: dark body and head, crossed by a broad light band on the abdomen, shoulders, and front legs.

They are pastured by Adrian Scumpu, one of the breeders committed to preserve the "porc de Bazna". "The Bazna pigs used to dominate the scene – they were called 'the poor pigs', because they eat everything, they are easy to breed, they breed a lot and grow quickly, accumulating thick, compact fat", says Adrian on the way to his farm, where he raises sheep and dogs as well as pigs. "Even under communism, every family had at least two or three, because, even under collectivisation, private pig farming was not opposed by the regime. Today, after the crisis of the Nineties, there is a new interest in the Bazna pig: I sell about 50-70 a year throughout Romania, almost all on the Internet, with the help of my children".

After a long walk around his farm, Adrian invites us to sit at his table, placed outdoors, in front of a low building where the tools of his work are preserved. On the massive bench are laid simple, aromatic dishes: slanina afumate (smoked bacon), carnati afumate (smoked sausages), jumeri (cracklings), rulade (meat and bacon rolls), and muschi tiganesc (loins), accompanied by the ever-present ciape (onions), lichio (sweet homemade bread, typical of Transylvania), and a glass of fragrant palinka (brandy).

"In our tradition, pork is often salted and slowly smoked – the best way to store it before the arrival of refrigerators. Hence, every house has a space dedicated to smoking, usually in the inner courtyard. Some, however, prefer their meat in jelly, like toba, dense and made to last longer, or piftie, to be eaten fresh", says a cheerful Adrian while pouring another glass of palinka. "For me, though, there is nothing better than a nice piece of slanina afumate cut into big juicy nuts, a slice of bread, and fresh onions. Those born and raised in these valleys do not need complex recipes or intricate dishes. This delicate whiteness is the flavour and aroma of home".