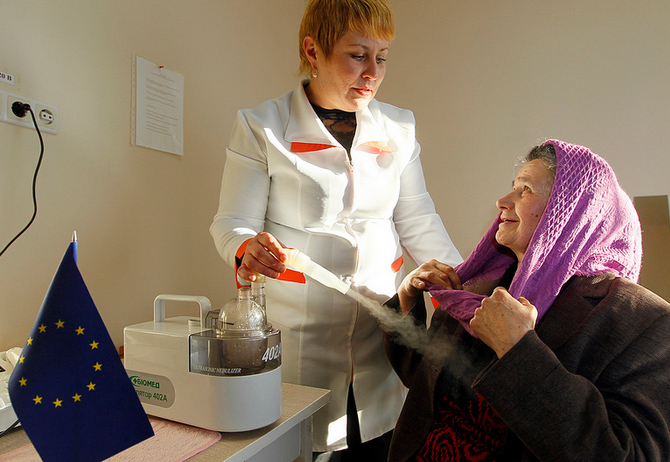 The healthcare sector in Ukraine is in crisis: low quality, stagnant reforms and dwindling budgets. Is it the result of a widespread habit to pay doctors under the table?

A recent USAID study showed that more than 2/3 of Ukrainians had encountered corruption in some form in 2015. About 1/5 of them had also come across some corrupted practices every month. The same study shows that 69% of the respondents had somehow engaged in informal practices, mostly cash payments, in state healthcare institutions. How did we get this far? There are several reasons.

Perhaps it is worth mentioning that the healthcare sector in the country is amongst the least reformed in Central and Eastern Europe. Since independence, Ukraine has not switched from a central planning system to a decentralized one with a health insurance fund claiming (against all odds and evidence) free-of-charge health care. Although the introduction of a social health insurance has been discussed for more than a decade, in contrast to other countries (e.g. Moldova, Romania, Lithuania, Poland) there seems to be little political desire to change the system of health care financing.

The fact that 17 different Ministers of Health have been appointed in the last decade, each of them lasting between half a year and three years, has not helped to feed a consistent approach to public health reform and can explain the uneven character of health care sector development. As a result, Ukraine has not shown significant progress in the strengthening of primary healthcare (General Practitioners' practice) and keeps on measuring hospital performances by merely counting the number of people who occupied hospital beds during a year, rather than by results.

As a matter of fact, hospitals in Ukraine exchange patients in order to keep beds occupied for the longest possible time and thus claim more performance-related expenses. They have a minimal target to ensure that they receive the money they are expecting from the central budget. This means they have an interest in keeping patients as long as possible. By contrast, other reformed systems (i.e. Latvia), have an interest in keeping people as little as possible since they will not be paid after a certain level of occupied beds per year.

Primary health care delivery has remained essentially the way it was, with a large network of under-performing urban and rural polyclinics, women’s consultation clinics and poorly equipped rural physicians’ ambulatories.

In fact, primary care physicians are consulted only for minor complaints, and patients for decades have obtained care from a specialist without any formal referral. The lack of an effective referral system and the absence of clear “care pathways” and post-discharge care protocols contribute to costly (and avoidable) admissions and readmissions. It comes as no surprise, thus, that between 1970 and 2010 life expectancy at birth increased by only one year, and is currently 71 years (66 for men and 76 for women), which is approximately six years lower than the WHO European region average (WHO Global Health Observatory Data Repository, 2013).

Things got even worst recently. According to the World Bank, the share of public health expenditure was reduced from 55.2% in 2012 to 50.8% in 2014. This essentially meant more pressure on patients, especially in the form of out-of-pocket payments. Not incidentally, 57% of respondents to the USAID survey declared they had to pay themselves for their drugs and tools, and 55% (of which only 14% spontaneously) made a quasi-formal payment, meaning that they were requested to make a charitable contribution to the hospital in order to gain access to healthcare

Informal payments can also be seen as stemming from a stubborn desire to keep the article 49 of Constitution of Ukraine alive, thus officially guaranteeing free-of-charge health care to everyone in spite of the fact that the lack of resources obliges the state to find some ways to de facto charge for healthcare. For example, a number of services that might be considered basic or standard in other countries (e.g. massages for health purposes) are classified as luxury services and are, thus, to be paid for.

The “chicken and the egg” dilemma applied to Ukrainian hospitals

How does this affect Ukrainian citizens? 36.7% of users reported making informal payment with an average (median) amount of 9.6 Euro per year. In the hospital sector the share and amounts are much higher than in ambulatory care: only one quarter of patients didn't pay anything during hospitalization and half of them reported making informal payments amounting on average to 38.3 Euro per year - against a salary of 230 Euro per month at the time of the survey. About half of the respondents indicated that informal payments were solicited by the medical staff during their last visit or hospitalization. The main reason of the informal payment is “better attention”, the second one is “better service”.

This situation implies a significant burden on households economies. About 18% of the families declared they had to borrow money or sell assets to cover the expenditure for health care services, while 60% reports having postponed the access to healt care for the same reason. Yet, high private expenditure is not recognized as problematic by key stakeholders in Ukraine.

The hospital's personnel is not doing any better. Under the current financial and regulatory framework, performance of health care providers is virtually disconnected from the formal system of incentives (financial as well as other less tangible incentives). Doctors and hospital staff have to be professional in their attitude, find resources (including money) for the survival of the hospital but are rarely formally rewarded for success or performance.

The above situation raises a question related to “what comes first”: is it the widespread corruption that, by allowing the subsistence of the system through informal payments, leads to the absence of reforms? Or is it maybe the other way around, meaning that because of the state incapacity to reform the public sector, informal payments are the only way to make the system work?

The “privatisation” of Ukrainian hospitals

A large majority of patients acknowledges that the medical staff earns very low salaries. This feeds a tendency to consider informal payments as a sign of attention or gratitude to doctors, especially when they show availability and professionalism without asking for anything upfront. The perception may change if they come across a doctor that puts it clearly: no money no service.

From the demand side, there is a widespread understanding that informal payments are part of the system and that, once someone has studied for many years to get a degree and save people, it is normal to expect an “offer” or “present” given that salaries are very low. This is not only agreed by 74,2 % of respondents but also confirmed as the most popular way of obtaining a good service: 34,2% use both connections and cash payment to secure proper care. The second and third most popular options are given to cash payment only (29,3%) and to free of charge medical assistance (21,8%).

A growing number of people are now turning to private hospitals. In parallel, private companies have started to provide employees with health insurances to access private hospitals. However, for those unable or unwilling to rely to non-public health care personal connections represent a viable alternative to cash payments. One can access a doctor and some services “for free”, but social capital and networks are needed.

The discourse becomes more complicated if a doctor needs to perform a serious operation. In such case they will need assistance and, even if not keen on money, their assistants will expect to receive some extra money for the job, not to mention health care goods. In addition, when certain equipment is scarce and the demand of services outnumbers the supply by several thousands, it is likely that those willing to pay extra money will have easier access to certain services than those unable to offer money.

The Ukrainian healthcare system is de facto privatized, with patients paying medical staff upon service. This is not very far from, say, the UK or Australian systems, where public and private medical care are offered within the same institute but at different speeds and quality depending on whether you pay or use the public insurance. The difference is that in the unregulated territory of Ukrainian health care, these payments are not taxable and patients cannot complain about the quality of services. If they are not satisfied, they cannot even claim to have paid money for a service since these transactions officially “never happened”.

Abel Polese is a scholar and a development worker dividing his time between Europe, former USSR spaces and South East Asia. He is interested in theory and practice of governance and capacity building of civil society and research organisations. Twitter: @Abiquitous

Tetiana Stepurko is head of master program and assistant professor at the School of Public Health of National University of Kyiv- Mohyla Academy, Ukraine and coordinator of Health Index.Ukraine.