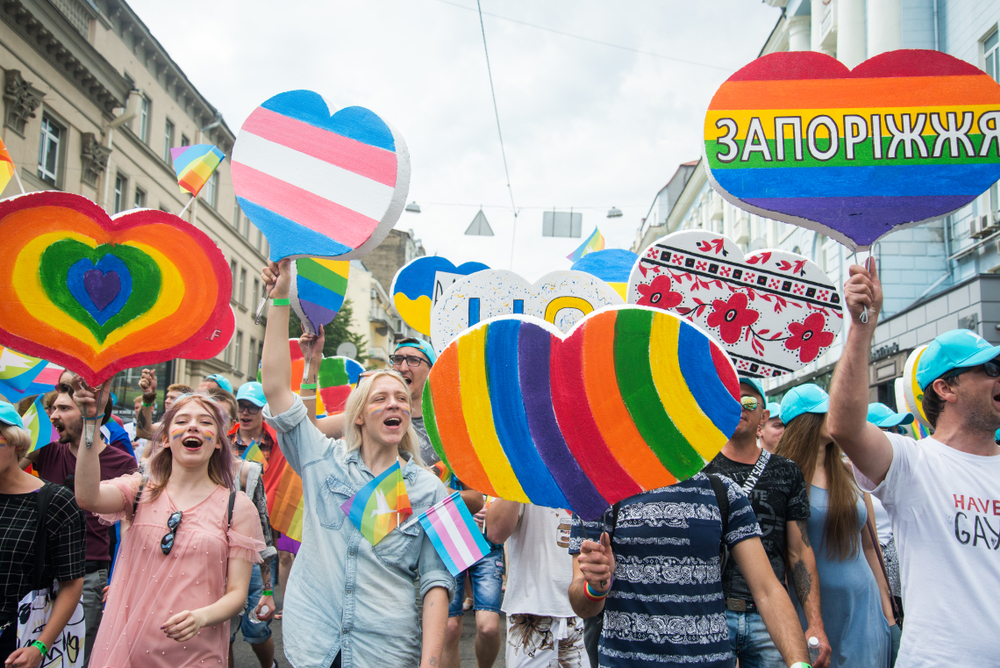 It has operated for over ten years alongside Ukraine's LGBT+ community. A meeting with some Insight activists and their views on Ukrainian society and the slow progress on rights in post-Soviet Ukraine

Founded by Olena Ševčenko in 2008, Insight is one of the leading Ukrainian associations that brings together and represents the lesbian, gay, bisexual, transgender, intersex, and queer community. The association defends and supports the rights, freedoms, inclusion, and diversity of all these social groups, dreaming of establishing an open, democratic, and tolerant society. Its headquarters are in Kiev, but recently some regional centres have also been opened.

"We are engaged in activities of various kinds at local, national, and international level", said Olena Ševčenko during a recent meeting organised by the French network European Citizens' Assembly (AEC). "First, we provide assistance and support to LGBTQI people who live in difficult situations or who are subject to discrimination. We provide legal, medical, and psychological professional assistance open to all. And, in addition to preparing and attending events and demonstrations, we also hold workshops, trainings, and discussions for a wider audience".

A discriminated community, from the USSR to today

In Soviet times, in Ukraine and in the other republics of the USSR, the LGBT community was forced to go underground: the penal code pursued and punished any act of "sodomy". Following the fall of the Soviet Union, on December 12th, 1991 the Verchovna Rada (the Ukrainian parliament) decriminalised all consensual homosexual acts. Subsequently the first LGBT local organisations in Ukraine arose, some still operating today, such as the LIGA association, founded in 1996 in Mykolaiv.

Decriminalisation was followed, in March 1996, by a document from the Ministry of Health which was meant to regulate (and therefore to legalise) the change of sex for the first time in the history of independent Ukraine (this document was then modified on October 5th, 2016 https://zakon.rada.gov.ua/laws/show/z1589-16). In May 2012, the first Pride was cancelled due to some threats by right-wing radical groups. The first Equality March was held in 2013 and brought together around 50-60 participants. In November of the same year Bogdan Globa, activist and executive director of the NGO Točka Opory Fulcrum (now American resident and founder of ProudUkraine), was the first person to come out in Ukraine, in front of the whole Verchovna Rada during the parliamentary hearings on European integration and anti-discrimination legislation.

The situation has taken on a new, albeit apparently precarious, course since 2014, following the Maidan protests: the pro-Western forces have also shed new light and attention on the rights of the LGBT+ community. In November 2015, President Petro Porošenko passed a law prohibiting workplace discrimination of sexual minorities, amending the labour code http://w1.c1.rada.gov.ua/pls/zweb2/webproc4_1?pf3511=57008 to harmonise Ukrainian legislation with EU laws on preventing and combating discrimination.

According to Insight, however, Ukrainian society remains largely intolerant of many social groups, including the LGBT+ community, with several episodes of discrimination and attacks against activists in recent years. Many members of the LGBT+ community are persecuted not only in real life, but also on social networks. Furthermore, LGBT+ people have to face everyday problems of different nature: from accommodation and work to the impossibility of having a serene and open relationship with their partner. In particular, trans people face specific difficulties: "Transgender people in Ukraine have enormous difficulties with the gender transition procedure, the conversion or change of documents and, of course, with public opinion since in most cases it is extremely complicated to find a job if you are a transgender person", explains Olena Ševčenko.

Transsexuality is still classified as a psychiatric disorder, as opposed to homosexuality, which was declassified in 1991. However, sex reassignment surgery is legal in Ukraine, but allowed only to people over the age of 25. The Ukrainian Ministry of Health has only recently taken steps https://www.rferl.org/a/ukraine-transgender-rights/28340837.html to reduce the obstacles faced by transgender people: since the end of December 2016 it is no longer necessary to submit a request to a committee of mental health professionals or spend a month in a psychiatric facility.

However, while homosexuality has been legal in Ukraine since 1991, social taboos remain on sexual preferences other than heterosexuality. Equal rights are not a given, and this is affecting the level of democracy in the country. A level that began to improve with the end of the Soviet era, but that is far from perfect. Many critics claim that homophobic attitudes remain widespread. According to the EU-funded Rainbow Europe survey, which provides an indication of the position of countries on a scale between 0% (serious violations of human rights, discrimination) and 100% (respect for human rights, full equality), the country ranks 36th with a score of 21.52%, just one position away from Italy.

Olena Ševčenko believes that things have not really changed since the 2014 Maidan events, let alone the recent change of power (presidential and parliamentary elections), although she admits that perhaps it is still too early to draw conclusions. Smiling, she recalls how, during the 14-hour press conference last October 10th, Ukrainian President Volodymyr Zelenskyj, while not taking an open stance, somehow expressed a tolerant opinion towards the LGBT+ community: "With regard to the LGBT+ issue, I don't want to say anything negative because we all live in an open society where everyone can choose the language they want to speak, their ethnicity, and their sexual orientation", explained Zelenskyj; responding to a stranger's question about the "spread of homosexuality and the legalisation of prostitution", he added: "Leave those people in peace, for God's sake!".

It is certainly not a statement in open support to the community, but at least Insight and its supporters can continue their struggle and activities without official disapproval by the government. Although he did not participate in Kyiv Pride on last June 23rd, which took place peacefully and successfully, the president issued a statement on the day of the March for Equality, demanding the application of the law to ensure the safety of all citizens during the event. A promise kept by the authorities, and part of the credit goes to the Insight team, which regularly organises training sessions to raise awareness among police special units on the management of events of this magnitude, such as the second European Lesbian* Conference held in April 2019.

Insight and the "Shelter" project

Following the outbreak of war in eastern Ukraine and the occupation of Crimea in 2014, many people in these regions have sought help from the Insight organisation, which started an ad hoc project called "Shelter". Living, or even just surviving, in these territories has immediately become a daily hell for the local population, especially for those affected by violence and discrimination based on homophobia, biphobia, and transphobia. "Our mission – explains project coordinator Olga Olšanska – was to provide temporary shelter and support for displaced LGBT+ people from the area where the armed conflict is taking place in the territories of the separatist republics of Donetsk and Luhans'k, and from the Crimean peninsula".

The project, which was launched in Kiev in 2014 and ended last August, provided a range of services: accommodation for up to 3 months, food, free public transport, basic first aid kit, psychological counselling, legal assistance, job search, and social integration assistance. The apartment made available had 4 rooms, for a total of 6 beds (although it sometimes hosted 8-9 people).

"We have considered 3 months as a sufficient period. In some cases people moved after only a month or two, it is not the same for everyone. In the spring of 2016 we took into consideration requests for assistance also from other LGBT+ people that found themselves in difficult life situations, were evicted from their home, fired or no longer receiving their salary, so left without means of support – Olga Olšanska told us – the most difficult phase was to convince the owners of the apartments to rent their properties to people from the LGBT+ community and moreover displaced people from Crimea or Donbass. This process took over a month. We also paid a rent twice the market price". Struggling with project funding, the organisation also resorted to crowdfunding to support the "Shelter" project. During the total duration of the project, from May 2014 to August 2019, Insight received over 300 applications and the association was able to accommodate 112 people, including 35 lesbian women, 36 gay men, 8 bisexual persons, and 33 transgender persons.