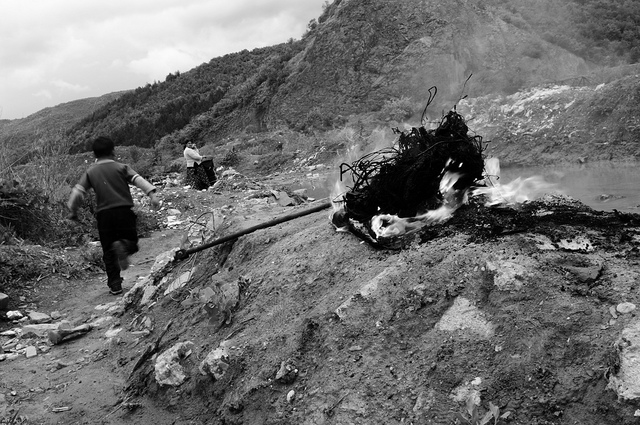 According to Human Rights Watch (HRW), Roma and related minority groups deported from Western Europe to Kosovo face discrimination and severe deprivation amounting to human rights abuse. In a report published at end October 2010, HRW asks for an immediate moratorium on forced returns

The 77-page report, "Rights Displaced: Forced Returns of Roma, Ashkali and Egyptians from Western Europe to Kosovo," documents the serious human rights problems faced by those who left Kosovo for Western Europe but were subsequently sent back. They experience problems getting identity documents as well as regaining possession of any property they own. They also have difficulties accessing housing, health care, employment, and social welfare services. Many end up in places where they are separated from family members. The deportations are especially hard on children, few of whom stay in school due to the lack of language skills, curriculum differences, and poverty.

"Europe is sending Kosovo's most vulnerable people back to discrimination, exclusion, poverty, and displacement," said Wanda Troszczynska-van Genderen, Western Balkans researcher at Human Rights Watch. "If Europe's leaders are serious about improving the plight of Roma, Ashkali, and Egyptians, they should suspend the deportations to Kosovo and ensure adequate support to those who have already been sent back."

About 50,000 Roma, most of them Serbian-speaking, and two Albanian-speaking minorities -  Ashkali and Egyptians, who claim origins in ancient Egypt - have been deported to Kosovo since 1999. The numbers look set to rise, with as many as 12,000 people facing deportation from Germany alone. Lack of assistance from international donors and the Kosovo government to those who are deported means that the burden of helping them once they arrive in Kosovo falls on the Kosovo communities of Roma, Ashkali, and Egyptians, the majority of whom live in acute poverty.

Kosovo's Roma, Ashkali, and Egyptians are historically its poorest and its most economically, politically, and socially marginalized minority. In recent years, many have been displaced because of the war, ethnic conflict, extreme poverty, and political instability. Their numbers decreased from more than 200,000 before the war in 1999 to 38,000 today. The Roma have often been the targets of violent attacks, spurned by some Kosovo Albanians - the largest ethnic group in Kosovo - as "collaborators" with the minority Serb population.

Some of them have obtained refugee status abroad, while others remain under temporary protection mechanisms. While living in Western Europe, Roma, Ashkali, and Egyptians experience living conditions that are incomparably better than those in Kosovo. Their children, often born abroad, learn the language and adopt the culture and lifestyle of the host Western European countries. They often grow up not speaking their parents' mother tongues.

Nevertheless, some who go to other countries fail to obtain asylum or their temporary protection expires, exposing them to deportation. Some of the forced returnees are unable to obtain Kosovo identity documents and have no Yugoslav or Serbian identity documents establishing prior residence in Kosovo, which makes them de facto stateless, often for prolonged periods.

In April, United Nations Secretary-General Ban Ki-moon criticized the deportations, saying they destabilize Kosovo's security situation and exacerbate the problems faced by these minority groups in Kosovo. The Council of Europe's human rights commissioner Thomas Hammarberg and the European Parliament also have called this year for suspending the returns until conditions improve.

UN refugee agency guidelines call on countries not to deport Roma and say that Ashkali and Egyptians should only be returned after an individual risk assessment and in a phased manner, taking into account Kosovo's limited capacity to absorb them.

"There is a growing consensus that these deportations are putting Roma, Ashkali, and Egyptians at risk and making life worse for those already in Kosovo," Troszczynska-van Genderen said. "EU governments' responsibilities don't end at their own borders. They and other donors need to focus on improving conditions on the ground rather than sending people back to face despair."

Since 2009, the Kosovo government has signed readmission agreements with Germany, Belgium, France, Switzerland, and Norway, with further agreements being negotiated. Kosovo is keen to strengthen its ties with EU and other European countries. These agreements, and the absence of screening by Kosovo prior to the forced returns, open the door to ever greater numbers of deportations, create a real risk of human rights abuse, and escalate crisis conditions for deportees, their families, and the broader Kosovo community.

The report finds that the Kosovo government contributes to the problems for the returned Roma and others by failing to insist that the deporting governments help create adequate conditions in Kosovo for those forced to return. Kosovo also has not taken adequate steps to regulate the returns and to assist those who return to reintegrate into society.

A strategy created in 2007 for reintegrating forced and other returnees has not been carried out, and the Kosovo government has made little progress on its wider strategy, also designed in 2007, to improve the rights of the Roma, Ashkali, and Egyptian communities as a whole.

Deportations from Germany have proved particularly controversial, with a recent hearing in the German Bundestag leading to condemnation of the policy by opposition parties and nongovernmental organizations.

A recent policy shift on deportations to Kosovo by the German state of North Rhine-Westphalia, where almost 40 percent of Kosovo Roma, Ashkali, and Egyptians in Germany are living, suggests that reform is possible. In September, the state's Interior Ministry issued a decree, which, while stopping short of suspending deportations entirely, recognizes the need for special protection of the Kosovo groups, requires individual screenings prior to return, and recommends not deporting school-age children.