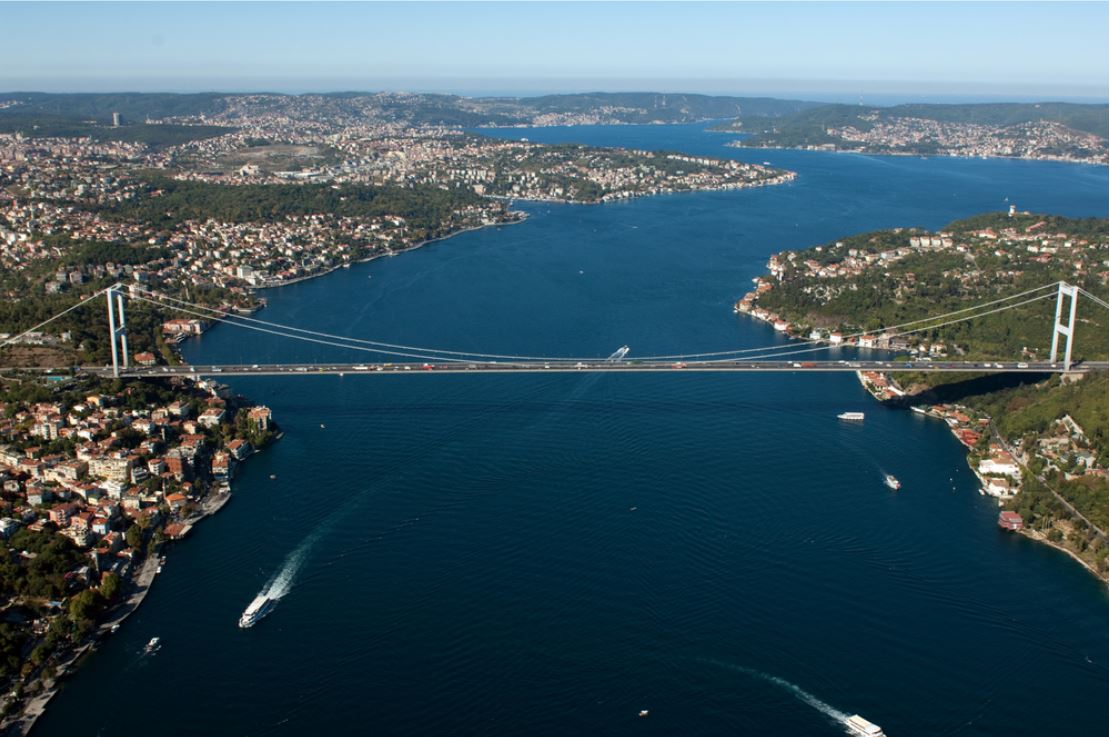 View of the Bosphorus in Istanbul - © Mehmet Cetin/Shutterstock

Turkish President Erdogan seems ready to launch the "crazy" project of Kanal Istanbul – the artificial canal that should "double" the Bosphorus – despite concerns about the possible environmental and geopolitical impact. The report by our correspondent

Will the shades of turquoise that every year colour the Bosphorus also colour the waters of Kanal Istanbul? This is the name of the most ambitious project by Turkish President Recep Tayyip Erdogan, a 45-kilometre long artificial canal to connect the Black Sea to the Sea of ​​Marmara and ease the maritime traffic that congests the "throat" – with this term, boğaz, the Bosphorus is known in Turkey – of the Turkish metropolis.

The magical waterway that separates the city of Istanbul in two shores is not only one of the most fascinating stretches of sea in the world, but also the space that allows navigation from the Black Sea to the Dardanelles, the gateway to the Mediterranean, for Putin's Russia but also for Ukraine, Romania, Bulgaria, and Georgia. A path full of geopolitical implications as well as huge ships that cross it every day.

In 2014 26,000, last year over 40,000 commercial boats passed through the waters of the Bosphorus. Also considering the traffic related to public and private transport ferries, it is undeniable that the canal that separates the two shores of Istanbul is one of the busiest sea stretches in the world and this is why the Turkish president publicly defends the construction of by Kanal Istanbul.

A project by Erdogan

The idea of ​​creating a canal parallel to the Bosphorus dates back to the imperial history of the city, both Byzantine and Ottoman. In more recent times, a similar project had been proposed in the electoral campaign for the Istanbul municipal elections by the centre-left DSP party, but it was immediately abandoned because those consultations were won by the opposing candidate: a young Erdogan who launched his long political career becoming mayor of Istanbul in the 1994.

Erdogan has been mentioning the idea of ​​building Kanal Istanbul for at least ten years, but the project only began to take a more concrete form after the opening of the first tender for the construction of bridges over the new artificial canal on March 26, 2020. Although official permits have also been issued, so far the area where Kanal Istanbul should be built has remained the same as it appeared ten years ago.

The rural area on the western outskirts of Istanbul designated for the construction of the canal is now occupied by buffalo farms, farms, and vegetable fields can be found. No construction site has yet been opened, although it is rumored that a ceremony could be organised in the first days of June in which President Erdogan himself would lay the first stone for the inauguration of the works.

What is certain for now is that part of the area intended for the construction of the canal has already been purchased by companies close to the Turkish president as well as by the family of the Emir of Qatar and that the project – often called "insane" – has already collected strong and very heterogeneous opposition in Turkey.

"It will be the end of Istanbul", is the opinion of Ekrem Imamoglu who, after the 2019 elections, became the mayor of the Turkish megalopolis, beating the candidate supported by Erdogan by almost a million votes and snatching Istanbul from the party of the Turkish president that had ruled it for decades.

According to Imamoglu, the new artificial canal is not only a "betrayal" for Istanbul but literally "would kill the city". The mayor refers to the over 200,000 trees that should be cut down and the 10,000 hectares of arable land that would disappear to make room for the canal path.

Since he was elected, the mayor has declared war on Kanal Istanbul with an environmentalist campaign but also concrete actions, such as a collection of signatures against the project, very popular but probably ineffective from a legal point of view. Irreversible changes to the maritime ecosystem, drainage of water reserves, and increased seismic risks for the city are also often cited by opposers of the project.

However, the opposition to Kanal Istanbul is not just a battle for the environment. On April 3, a hundred retired admirals signed a letter criticising Kanal Istanbul as the construction of the new canal would create the conditions for Turkey's withdrawal from the Montreaux Convention, the international agreement that regulates the passage of ships on the Bosphorus by granting Ankara a large margin of control.

Signed in 1936 in Switzerland, the convention grants the free passage of commercial vessels while setting precise limits to the transit of warships on the Bosphorus. In this case Ankara must be informed eight days in advance, while the states that do not directly overlook the Black Sea are still subject to limitations as regards the size of the fleet that can transit.

In fact, the Montreux convention grants Ankara the keys to one of the most coveted gates to the Mediterranean and somehow limits the room for maneuver of Russia and the United States, that not overlooking the Black Sea are subject to limits regarding the passage on Dardanelles and Bosphorus.

The letter signed by the retired admirals criticised Kanal Istanbul citing the importance of the Montreaux convention for the security of Ankara, but what Erdogan saw in this appeal was above all a warning that recalled the ultimatums launched by the military before the coups that marked the history of republican Turkey. Ten of the admirals who signed the letter have been under arrest for a week and the Turkish president has publicly stated that he has no intention of tearing up the Montreaux convention. In fact, if Kanal Istanbul were really built, the Turkish president would be in a position to be able to decide how to administer the new canal parallel to the Bosphorus even without withdrawing Turkey from the Montreaux convention.

Who pays for the canal?

According to a recent survey, almost half of the Turkish population does not approve of the project, but a less apparent, and at the same time stronger opposition to Kanal Istanbul suddenly came from four of the main Turkish banks which – according to an exclusive investigation recently published by Reuters – have already decided that they will not finance the project, the cost of which in 2019 was estimated at 75 billion Turkish lira (at the time about 13 billion dollars).

The bankers interviewed cited too high environmental risks to be able to participate in the financing of Kanal Istanbul, one of them also stated that no Turkish bank could really afford to participate in such a project.

However, Erdogan's determination to realise the Kanal Istanbul “dream” does not seem to waver even in front of the lack of support from the Turkish banking sector. Therefore, if the project really goes through, the costs will be partly borne by foreign investors who will reap not only economic benefits, such as revenues collected from a toll charged to ships in transit, but also geopolitical ones, considering the strategic implications of having a new canal parallel to the Bosphorus but not subject to the same regulations as Montreaux.