Armenia: sexual minorities, the alternative to violence is silence 12/11/2018 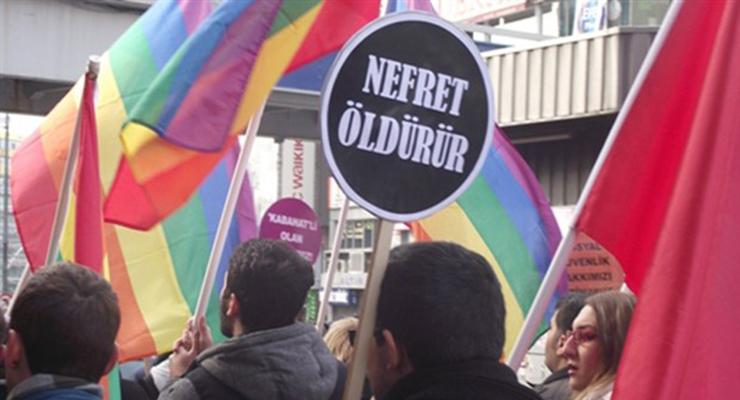 After the failed coup in Turkey, the state of emergency exacerbates discrimination and attacks against the LGBT community

After the failed coup in Turkey and the subsequent state of emergency imposed on July 21st, the European Convention of human rights appears to have been suspended as seen by the thousands of arrests and dismissals.

Another emergency involving the LGBT community (Lesbian, Gay, Bisexual, Transexual) emerged after the cruel and brutal murder of Hande Kader . An LGBT activist, the body of the twenty-three year old transexual was found burned and mutilated last 12th August at Zekeriyaköy, on the outskirts of Istanbul. Last June Kader was in the front line of the Trans and Gay Pride in Istanbul that was brutally blocked by the city authorities. To make a living she worked as a prostitute, like most of the transexuals in Turkey, who rarely find other work.

Homosexual or transexual relationships are not considered to be crimes in Turkey. But there are no laws governing the rights of the LGBT population, leaving them very vulnerable. Over the last decade, the fight for the acknowledgement of these rights by various associations has involved several political parties.These include in particular the pro-Kurdish and progressive HDP party (Democratic People’s Party which in 2015 presented an LGBT candidate at the political elections), and the People’s Republican Party (CHP), which helped to legitimise the community’s requests. However, considering the conservative Islamic government’s position, the demands of the LGBT people seem like distance pipe dreams. The ruling Justice and development party (AKP) has failed to introduce a law to punish homophobic crimes. More recently, they blocked proposals by the HDP and the CHP to include a law forbidding any form of sexual discrimination in the new constitution. Believe it or not, at the beginning of the political rise of the AKP, president Recep Tayyip Erdoğan at the time leader of the formation, declared that there was "an obligation to defend the homosexuals within their rights and their freedom”. Words in line with the then still strong commitment by Ankara to join the European Union.

From 2003 onwards, Istanbul hosted numerous Gay Pride events, a reflection of the positive atmosphere produced by the prospect of entering the EU. In 2013, the year of the protest at Gezi Park, the thirty protesters who took part in the first event had now become fifty thousand. The last two years has seen a fierce fight between LGBT organisers and the authorities as well as a massive police intervention against the demonstrators. However up to 2015 it was still possible to organise a Pride.

For the first time this year, after thirteen years, the Pride was banned. The justification was so as “not to offend the religious sensibilities of the citizens”, the reason being that the event would have taken place during Ramadan, the Muslim sacred month. Yet the overlapping with Ramadan occured also in previous years, and it was never invoked as a reason to ban the Pride.

With the 2016 event, new “sensibilities” appeared of an ultranationalistic character. A group called Anatolia Muslim Youth (Mülsüman Anadolu Gençliği) launched an appeal for a counter-manifestation to stop “these perverts without any pride”. And the members of the Alperen Ocakları, the youth section of the ultranationalist BBP, declared they were ready to stop the Pride “at any cost” because “they mock us, ignoring our values during our sacred month”.

When crimes are silenced

Ironically, cross-dressing has always existed in the Ottoman culture. The köçek were young males whose duty it was to dance in female clothing at parties and ceremonies. A tradition which still exists today in Kastamonu and other localities in Anatolia, and which is kept alive today by men dressed in skirts dancing at weddings and other ceremonies. Some LGBT figures are very popular in entertainment where transgender is accepted without any problem. The most famous is Bülent Ersoy, a keen supporter of Erdoğan, who at the moment of the Gay Pride, when the police were suffocating groups of LGBT with tear gas, was sitting at the same table with Erdoğan and his wife.

Apart from those in the elite society and in the fashionable areas of Istanbul where homosexuals and transgenders live relatively comfortably, the life of the LGBT is not easy at all. In a patriarchal and chauvinist society, marginalisation often starts at home and extends to the school and university and then to the workplace. Because of social pressure, many people do not express openly their sexual orientation, thus making it very hard to implement a representative national research. According to an investigation conducted in 2013 by the Pew Research Center , 78% of Turks did not think that homosexuality “should be accepted in society”. A report presented to the United Nations found that between 2010 and 2014 forty “hate homocides” were reported in Turkey against LGBT people. Volkan Yilmaz, researcher and professor at the Civil Society Studies Centre at the Bilgi University in Istanbul, says that there is a serious problem regarding the condition of the LGBT minority in Turkey. He talks about “the unfair legal situation and the impunity towards those responsible for discriminatory actions”.

The latest Kaos GL Association report shows that, in 2014,out of 351 cases of hate crimes registered (including murder, attempted murder, both physical and sexual violence) only 31 were reported to the police and only 4 were presented to the courts. Within the LGBT minority, transgenders are discriminated against the most. According to a Transgender Europe report with data up to April 2016, murders of transgenders in the last 8 years show Turkey in ninth position in the world and first in Europe with 43 murders, Italy is next with 34.

Another group suffering from violence and discrimination are the refugees who arrive to Turkey after fleeing prosecution in their own country. Another death added to the long list of unpunished crimes against the LGBT population is the murder of a Syrian refugee, Wisam Sankari, a homosexual who had been in Turkey for one year. According to other residents, Sankari had already been abducted once before, but a complaint to the police brought no result. He was abducted a second time and was stabbed to death and his head cut off.

In the climate of repression following the failed coup of 15th July the LGBT community continues to demand justice even though they feel even more vulnerable.