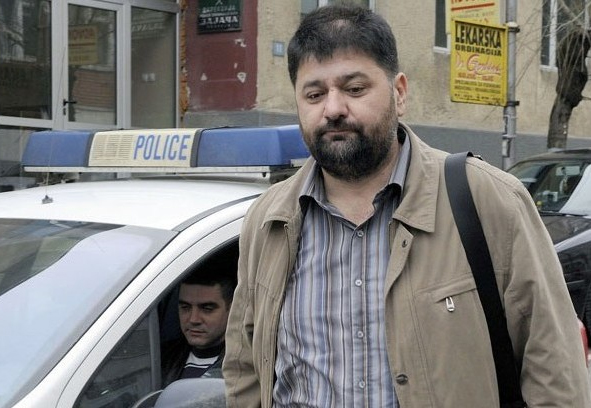 Between journalists and criminals, some state institutions favour the latter. The story of Vladimir Mitrić, journalist in Western Serbia, as told to SEEMO, the South East Europe Media Organization

Vladimir Mitrić is a journalist from Loznica, Serbia. He has worked, among others, for the daily papers “Glas Podrinja” and “Loznicke novine”, and is a correspondent for the Belgrade-based daily “Vecernje novosti”. Mitric has been awarded many acclaimed journalistic prizes. His work focuses especially on investigative journalism in the areas of human and drug trafficking, war crimes and crime connections in Serbian and Bosnian institutions.

You live under police protection. Please explain why.

I live under the police protection that I was granted by the Court, not by the police, on my own request, which is important. I was attacked on the doorsteps of the building where I used to live on 12 September 2005, only a few meters away from a coffee house garden full of guests. Some of the guests were actually police officers, off duty.

The person who attacked me was a policemen who I later learned had served in the Police Precinct of New Belgrade. My attack was very similar to the one in which our colleague Milan Pantić was killed, in Jagodina. I simply had more luck, and perhaps skilfulness. The first hit of the baseball bat was aimed at the back of my neck, but I made a step forward and it ended up on my back. Then I turned around and attempted to protect my head with my hands, which resulted in a fracture to my left arm. I fell and yelled for help, receiving another twenty or so hard hits, after which the attacker simply walked away.

None of the policemen in the coffee house who were seated next to the entrance of my building felt it was necessary to help me or approach me after the attack. The chief of the Police at the time, Slaviša Mitrović, confirmed during my trial that my request for police assistance after the incident was rejected.

At the time I was writing, as I have done all these years, about human trafficking on the border between Serbia and Bosnia Herzegovina, about the grabbing of the Drina river natural resources, about economic crimes, drug smuggling, illegal ties among people and state institutions, and politicians with no ethics. I pointed out that Loznica is the hometown of the murderers of the war criminal Željko Ražnatovic Arkan, as well as of the Serbian politician Ivan Stambolić, and of other affairs. I wrote about lawbreakers who increased their wealth by buying firms and companies illegally, leaving the workers with nothing. Also, about the car and drug smuggling along the river Drina. I’ve written and still am writing about war profiteers, tycoons, murderers who are protected by people in state institutions and about how the situation is worsening all the time.

We know that you have experienced problems with your police protection. You didn’t have it from the beginning. How did it come to that, and why?

In the beginning, my police protection was informal, meaning that police officers would show up or not show up in front of the building I lived in, so I was forced to be in a sort of house arrest. Slaviša Spasojević, the head of the Police Precinct in Šabac, recently told me that he had trouble trying to convince the policemen in Loznica to provide me with protection. There was obstruction from the capital, Belgrade, regarding the investigation of my attack, especially when it came to arresting my assailant. He was a policeman. Even when I did manage to obtain police protection, I always had to go home before it was dark, because they functioned on the principle ‘now you see me, now you don’t’.

This all changed after the former chief of the Police department was removed from his position. He was arrested for human trafficking, drug smuggling and for organizing robberies in Loznica and Krupanj. In the meantime, people realised the severity of my situation, and the quality of police protection I am receiving is now undeniably better. In 2007, the then-deputy commissioner of the Police in Loznica contacted me regarding an incident in 2003, when I was physically and verbally attacked by two men, one of whom was a tycoon. The other was involved in the murder of Željko Ražnatović Arkan. The two of them were sanctioned for that aggression with a 100 and 200 € fine. The police officer that attacked me was sentenced to six months in jail, because his attack was never qualified as an attempted murder. It undoubtedly was, in my opinion and the opinion of the doctors and coroners who examined my injuries.

An additional problem I had was the antagonism of the Prosecutor in Loznica, who shortly after my attack said: “If only he had died”, a phrase later mentioned in many articles about the case. The attacker was sentenced almost eight years after the incident to a one-year jail sentence, of which he served only a portion. My costs for the trial are a salary’s worth, while the attacker refunded me none of the damage. Between journalists and criminals, some state institutions still favour the latter.

Has living under police protection changed anything in your life, or in the life of your family

Of course, it changed a lot in my life and in the life of my family. I hardly have a personal life now. The protection I am under is only valid in the police precinct of Šabac, so when I travel to Belgrade or, even to the nearby city of Valjevo, I am risking my life. Those are the protection conditions I have, which were established during the time of the previous prosecutor, and haven’t been changed since. People, even close relatives, have become more reserved with me since the police have to - at least indirectly - check them in some way. My car was demolished three times, in the city centre, and I have never been able to receive any information about how far has the investigation gotten, or if there is one. Certain police officers even testified against me and lied to protect the colleague who attacked me.

What is your advice for journalists who experience what you have? What should they do?

The most important thing is not to be quiet about it, to talk about it as much as they can and whenever they can. They should certainly contact SEEMO , and anybody else that they can. They shouldn’t allow people to ‘explain’ to them the reasons why this happened. They should write, document what was done to them, and keep a record of what they’ve said and written, because things that have no trace or documentation also have no arguments. They should insist that the proper institutions investigate their case, and remind them, in writing, of what happened to them. They have to put their pride aside and say what they have experienced, because this is what the other side expects. It is important that they immediately contact attorneys, and do not even think of quitting their profession. They must let everyone know they will do their job with even more passion and desire for truth.

Did the SEEMO reaction have any impact in your case?

I’ve had SEEMO’s support from the very beginning, when you addressed public letters to Vojislav Koštunica and Dragan Jocić, the Prime Minister and the Minister of Interior in Serbia at the time. I was not expecting them to do anything, simply hoping the situation would not worsen. A year ago, Vladimir Božović, who was deputy Minister of Interior at the time, told me that he was criticized by Jocić after he had visited me, saying: “Why did you go see that traitor, enemy and spy?” SEEMO also reacted in other cases regarding my police protection, and invited me to their conferences as a panelist. SEEMO was a big source of support, help and comfort that I needed at the time of my attacks.