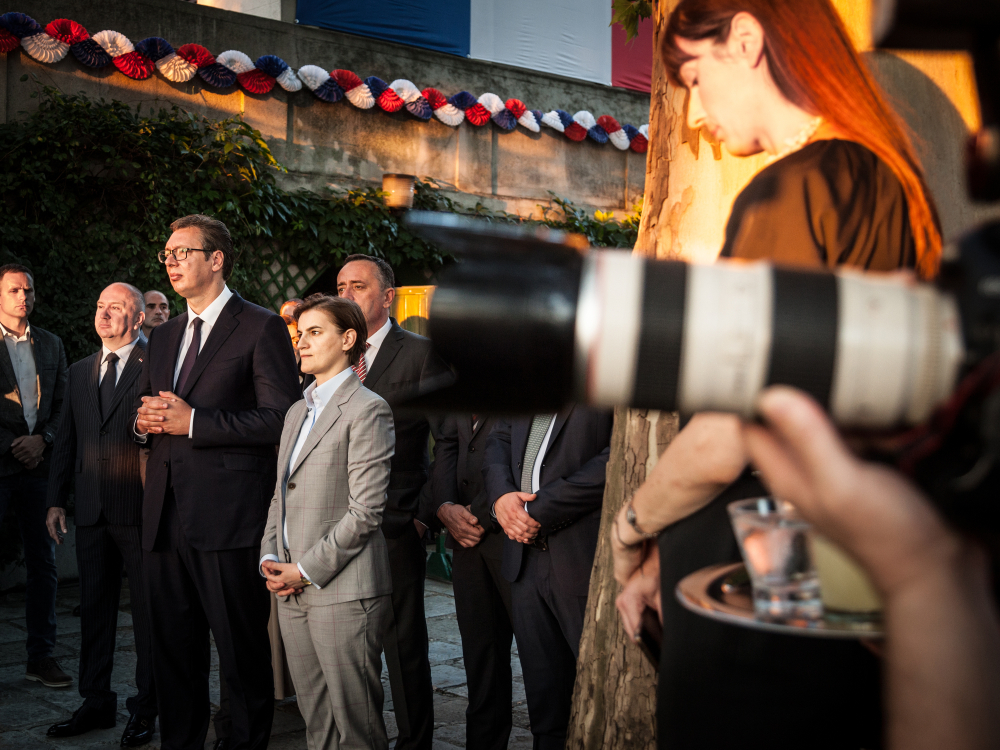 Stevan Dojčinović is an investigative reporter based in Belgrade and editor-in-chief of the KRIK (Crime and Corruption Reporting Network), a non-profit organization established to improve the investigative journalism in Serbia, founded by a team of journalists who for years has been engaged in exposing crime and corruption, and who have received many awards for their work. Stevan works for the Organized Crime and Corruption Reporting Project (OCCRP) as a regional editor. He has specialized in investigating organized crime, corruption, privatization deals, money laundering, private security agencies and the gambling industry. He is the author of the book “Šarić − Kako je balkanski kokainski kartel osvojio Evropu” about the role of the Balkan mafia in international cocaine smuggling. He also teaches journalists how to collect and analyze business data and property records. He won international 2018 Award for Outstanding Merits in Investigative Journalism, given by the Central European Initiative (CEI) and the South East Europe Media Organisation (SEEMO).

How do you assess the current situation of media freedom in Serbia?

There are some free media outlets in Serbia, of course, but there is little or no free mainstream media. If we talk about big Serbian media corporations or outlets with a wider reach among the public, there are very few which can be defined as truly independent. The government controls most of the media, not through direct ownership, but thanks to financial measures. The Serbian government is currently supplying a lot of money to the media in different ways. Sometimes public companies or the government itself advertise on these media, sometimes money is channelled through so-called “project financing”, which allows outlets to apply directly for public funding. Most of the allocated budget, of course, goes to media considered “friendly” by the government. The few free media in Serbia, newspapers, online outlets, TVs or radios are generally smaller and with a relatively limited outreach.

What are the main challenges KRIK and other independent media have to face in Serbia to preserve their freedom?

It's difficult to be a free outlet in Serbia, essentially because this goes against the general intentions of the government. The ones in power in Belgrade don't like any kind of stories criticising the government, exposing corruption, and so on. But they don't even accept different opinions, even on lighter topics. The Serbian government is extremely committed to putting pressure on the media and is investing a lot of money, resources, and energies to control them. At the same time, since they don't want to be seen as censors, they're trying hard not to leave any fingerprints in this process, using subtle means to exert control. Most of the media are handled through financial means; with the rest, especially NGO-based ones with international donors, different mechanisms are put in place to discourage free reporting.

What kind of pressures did KRIK experience through the last few years?

Pressure is applied on many different levels. For example, being an NGO-based and independent media like KRIK means to be under constant surveillance by the state secret services. In a recent interview, one of the heads of the services stated that the presence of “foreign factors” is the main danger they deal with, explicitly naming NGOs and journalists as “top threats” to Serbia's national security. For us, this was hardly a surprise: for a long time, we've been followed, surveilled, wiretapped. Much of the information gathered was leaked to tabloids close to the government, that used it to lead smear campaigns against KRIK, exposing facts and episodes from our professional, but also personal life. Smear campaigns by large-circulation tabloids under government control are a very effective tool used to restrict media freedom. When we publish stories about corruption in the institutions, we're immediately attacked to divert the public opinion's attention and implement a “damage control” strategy, which relies on the fact that mainstream media under their control have a much wider outreach than our investigative reports.

Are legal means also used against the media?

Yes, lawsuits against journalists are becoming quite common in Serbia, no matter how fact-checked your investigations are. And often top-officials, like ministers, sue the media. For example, KRIK was sued four different times for the same story by Nenad Popović, Minister without portfolio for innovations and technological development. We asked to merge the lawsuits, but the court denied our request. So we are currently spending an enormous amount of time, money, and energies to defend ourselves. And Popović's lawsuits are not the only ones we're dealing with at the moment.

For years now, KRIK has been publishing investigations about corruption and organised crime in Serbia. What kind of impact have they had on the public opinion?

They had a big impact, but at the same time and on another level, no impact at all. I'll try to explain better: most of our stories reach the public, often far beyond the circle our usual readers, and they provoke wider discussions among the public opinion. When I sit in a taxi cab in Belgrade, for example, very often the driver would know, even in details, about the stories we brought to the general attention. So we definitely manage to inform: unfortunately, though, our capability to generate a change in Serbian society remains largely unsatisfactory. People in our country don't seem to perceive how harmful corruption really is, they read our stories, but are not deeply motivated to insist for politicians to stop such practices. That's why, at every election, they keep voting for the same people.

In the last few years, fake-news and disinformation have become a very hot subject at the global level. One year ago, KRIK launched the project “Raskrikavanje”, focused on debunking. What are your findings about fake-news production in Serbia?

Two years after we started running KRIK, we found out that it was not enough to publish the truth: due to a large amount of fake news circulating on the local media, it was necessary to offer the public a tool to debunk them. As I mentioned, for example, after we published a story on corruption, readers and viewers would be literally bombarded by pro-government media with fake information, used to undermine the public's trust in our investigations and in defence of the ones in power. With Raskrikavanje, we try to give the public an opportunity to better understand this vicious mechanism, fact-checking and debunking false information. The interesting thing about Serbia is that while in most Western countries the main sources and dissemination channels of fake-news are the Internet and social networks, allegedly with Russian involvement, in our country the big fake-news producers are mainstream media, often on behalf of the government.

Have you registered any significant impact since you started Raskrikavanje?

Over the last year, we definitely managed to debunk a lot of fake-news. In the short term, I believe Raskrikavanje proved to be a useful tool for the public to have a better understanding of the problem. In the long term, though, the challenge is much harder to address, and it will probably take years to see any visible result. The real problem is not in the single lies published, but in the overall fake-narrative built by mainstream media which, as I mentioned, have a wide outreach and often retain among readers some of the credibility they used to have in the past.

President Vučić's Serbian Progressive Party has been in power since 2012. How much does Vučić's communication strategy contribute to his political success?

Vučić openly controls everything in Serbia: even the Prime Minister is completely dependent on the president's will. I think Vučić proved himself a very skilful player in communicating with the electorate and inspiring his voters. To do so, he chose to present himself as a “man of the people”. He claims to be one of the poorest leaders in the region: he wears cheap suits, he doesn't even have a watch, and only recently showed to own a smartphone. He wants to show he's a regular guy, not affected or corrupted by power, and ready to suffer along with his fellow citizens. In public, Vučić always speaks from the position of opposition: even if he has controlled the country for years, he always claims to be fighting unspecified “dark forces”, inside or outside the country and blames the previous governments for every shortcoming of his administration. This strategy proved to be effective with the Serbian public opinion, and Vučić still enjoys wide support. The real secret of his success, however, his strongest tool to maintain power, lies again in his control over mainstream media, which makes his narrative so pervasive and unchallenged. Vučić would be ready to give up on everything, but never on his control over the media.