Serbia, censorship according to Aleksandar Vučić 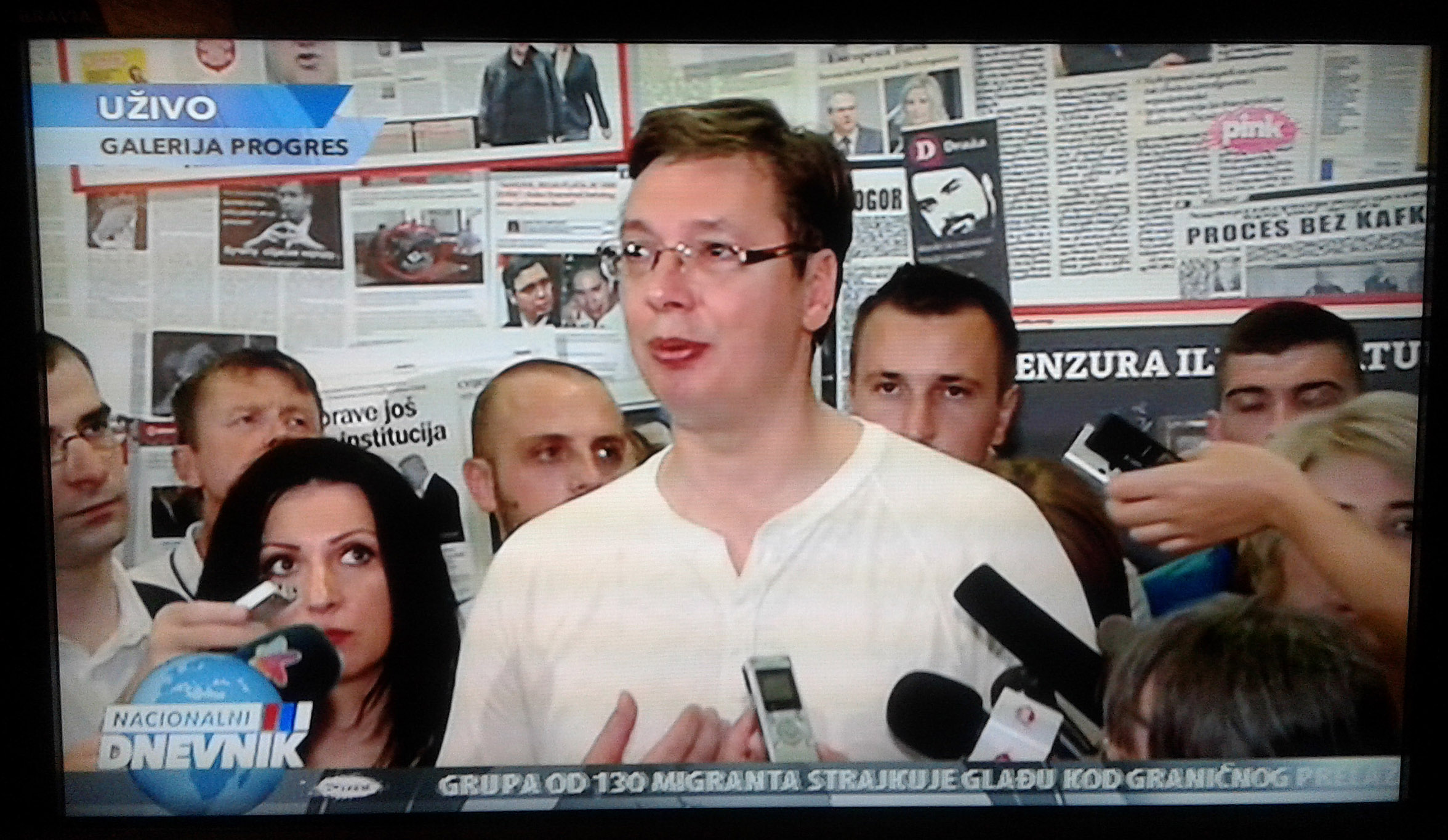 An exhibition organised by the Serbian Progressive Party of Prime Minister Vučić tries to counter criticism about censorship in the Serbian media. The effect, however, is that of a blacklist

It is hard to understand what prompted outgoing Prime Minister Aleksandar Vučić, who has enjoyed four years of great power and citizen support and was tasked with forming the new Serbian government, to display critical articles, caricatures, TV reports, and tweets about him. Last July 18th, in a central street of Belgrade, at one of the city's most famous galleries, the PR office of his Serbian Progressive Party inaugurated an exhibition titled "Uncensored lies – manipulating the concept of censorship in Serbia 2014-2016".

The exhibition was supposed to respond to criticisms by some Serbian journalists, a part of the public, and various international organisations dealing with the media about Vučić and his party controlling the country's most influential media channels, famous journalists losing their jobs, and opponents being pointed out on tabloids as enemies of the state.

"We cannot talk about censorship and media freedom without facts... so we decided to display the media scene in Serbia this way", the organisers said during the inauguration. A week later, Vučić himself, live on TV Pink [see photo], one of the country's most watched channels, visited the exhibition and said, among other things, that he does not read or care about anything that is written about him. "I'm not interested, nor thrilled", said Vučić to the numerous journalists, and continued to talk about the successes of his government.

However, nothing about these successes is displayed in the exhibition. Rather, what is displayed is the work of some media channels that, unlike many others who praise the government, write critically of Vučić's family scandals, corruption in government circles, doctorates plagiarised by his closest collaborators, protests after a group of hooded figures harassed the inhabitants of a central neighbourhood of Belgrade – which remains an unsolved case, without any clue to who did it and why - along with several unresolved scandals and other irksome topics for the government.

On the screens of the exhibition, one can see reports by two television channels – one local and one on cable – and some independent productions that can only be seen on the internet, featuring public figures that the most influential media stopped inviting.

An entire wall is devoted to tweets by the same critics of the government; another  one displays caricatures by three well-known graphic artists. Everything is displayed on expensive prints, with excellent professional production, and the most peculiar part of the exhibition is a video clip where well-known TV host Zoran Kesić uninterruptedly utters the name of Aleksandar Vučić.

President of Serbian parliament Maja Gojković, member of Vučić's party, described the exhibition as "conceptual art" and compared it to the work of famous Serbian artist Marina Abramović. However, those who do know about art see this show as a mere PR project. The numerous comments, protests by journalists, praises or condemnations, however, demonstrate that the exhibition has succeeded in one thing – keep talking about censorship in Serbia, whether to prove or deny it.

The "curator" of the exhibition also managed to gather different "authors" in one place, including EU Ambassador Michael Davenport, university professors, well-known artists, the OSCE Representative on Freedom of the Media, Dunja Mijatović, various activists and journalists, the vice-president of the European Parliament, Ulrike Lunacek, and the director of the European Federation of journalists, Renate Schroeder. These public figures are placed next to ambiguous characters of the media sector, known for their vulgarity and who could hardly be called journalists, as well as anonymous twitters. Different people, "united" by their criticism of Aleksandar Vučić.

Placing serious analytical and investigative pieces next to tabloids clearly aims to belittle the truth in the first, making an undoubtful truth for many media channels look senseless – something that in an other exhibition, could be called "censored truth", since these issues do not appear on most Serbian actual media, which are in fact devoted to continuous praise of the rulers.

The blatant repetition of statements by some critics of Vučić leads the occasional, uninformed visitor to recall the names of the "enemies" of the government – although these are already well known and often labelled by the pro-government media as traitors, conspirators funded by the West, who wish to plan a coup, slanderers, people of suspicious past and bizarre habits.

In Serbia, there is a tradition of blacklisting, and many remember that the Serbian Radical Party, of which Vučić was one of the leaders in the nineties, had created a list of non-Serbs who had to be removed from their jobs or the country. Now, with a step further, the proscribers were displayed in an exhibition.

Who are the targets of the exhibition?

It remains unclear why Aleksandar Vučić has not created, like other politicians have done, an exhibition to display his achievements, the results of his reforms, international acknowledgement.  To whom does he want to show, as stated in the catalogue, that  "freedom of expression in Serbia is significantly higher than in many Western European countries"?

Is this a message to the international community, which is closely following what happens in a country that has already started accession negotiations with the European Union? Or is it aimed at the authors, to remind them once again that their "hostile activities are carefully monitored and recorded"? Or is it aimed at showing his voters that he is not afraid of anything and that he governs supremely, despite being victim of daily attacks?

Whichever the reason, the way he decided to display himself through the criticism of others is almost unique in the world. Three years ago, in Podgorica, a similar exhibition had been inaugurated, on criticisms against Montenegrin Prime Minister Milo Đukanović, and many believe that it was organised by the same curator of the Belgrade exhibition. There is also another example in the comments to Vučić's exhibition.

In 1933, Ernst Putzi Hanfstaengl, Adolf Hitler's secretary of foreign press, curated, at Hitler's request, the book "Hitler in der Karikatur der Welt: Tat gegen Tinte" ("Hitler in the World’s Cartoons: Facts versus Ink "). The book featured selected caricatures published on the American and European press between 1924 and 1933, which showed Hitler in an offensive light. The book was released by an unknown publisher, to make it look like an initiative by the independent media. Next to the caricatures, Hanfstaengl wrote comments and "true facts".

Serbia is obviously not Nazi Germany, nor is Vučić Hitler. However, in order to avoid such comparisons, it would be best for the prime minister and Serbia if the people "displayed" in the exhibition went back to where they belong – the media.