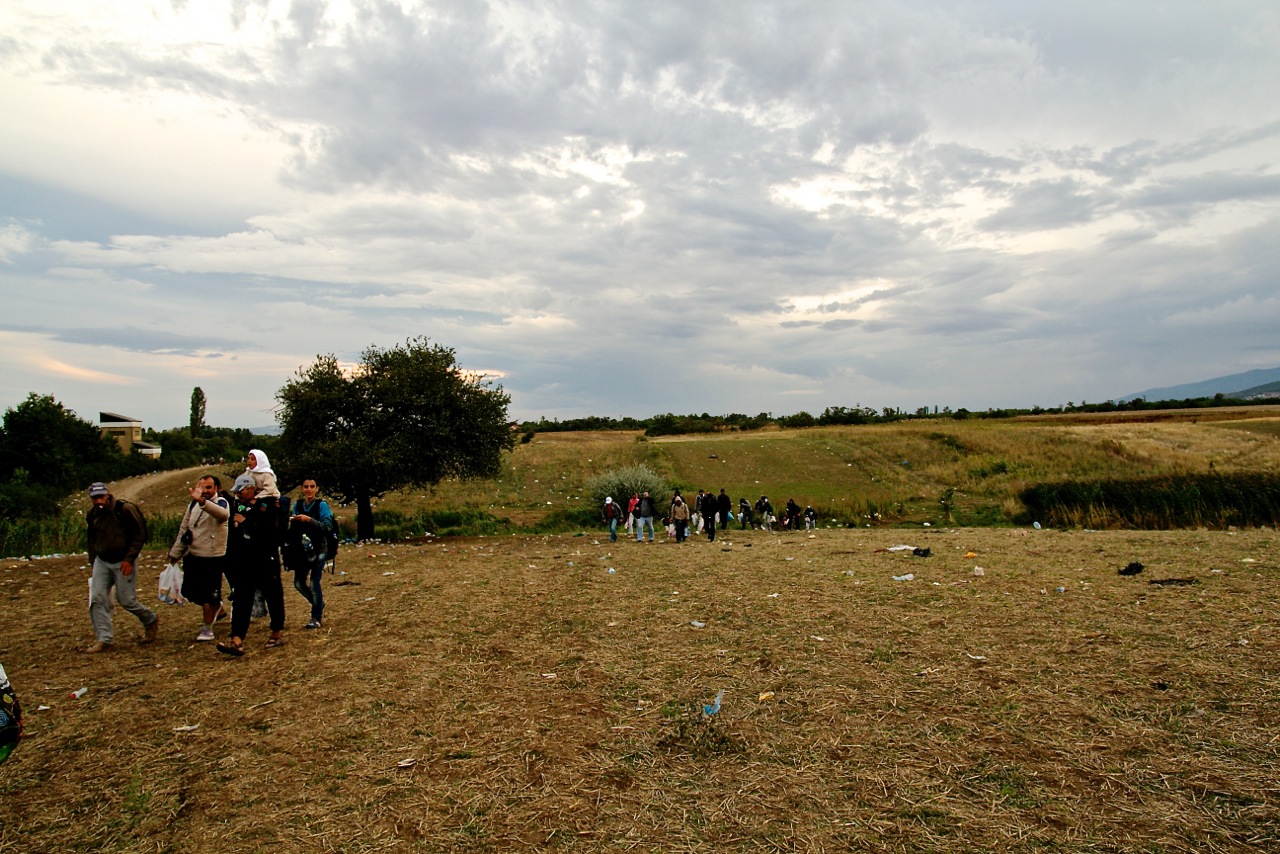 From Macedonia to the border with Serbia. The refugees cross the border and head for Preševo. Fifth episode of the travelogue by our correspondent on the Balkan Trail

Serbia begins with a succession of ups-and-downs of dry grass, marked by the occasional tree. As usual in these border crossings, the path ahead is indicated by empty plastic bottles, left by those who preceded us. Except for Alaa, a young Syrian from Damascus who tried to teach me how to conjugate verbs in Arabic on the bus from Gevgelija, no one is in the mood for a chat. And after a cheerful start of the walk, even he clams up in silence.

We see the first Serbian officials on the hills, standing in pairs. They look bored, but still intimidating. We already crossed the international border, marked by a small memorial stone, leaving behind the camp of Macedonian NGO Legis, which gave everyone clothes, water, and burek, and we are now at the mercy of those agents. Yet, apparently, they are not going to stop us. After the last turn, we get to the small makeshift roadblock. There is a scanner for bags, like at the airport, and all around a series of tents where some UNHCR doctors or employees lend help to newcomers.

The atmosphere in the group is now more relaxed: it is clear that these men in uniform will not cause trouble. Or, at least, not to those who come to apply for asylum. Discreetly, we follow Alaa and the others over the scanner, into the field. "Hey, you, what are you doing?". One of the officers has spotted the blond one in the crowd. "We are journalists". "You need a permit to get in here. You need to go back to Preševo and apply for it at the reception center". We nod and head to Preševo, like the rest of the group. The first Serbian town is about ten kilometres away, beyond the border municipality of Miratovac. We need to walk for part of the way. As we advance on the road of dirt, passing cars get more frequent. "Taxi, my friend?", asks a man with a very wide smile.

Those who resist the temptation of a car ride (20 Euros) can take a half-hour walk and then board on the free shuttle bus organised by a local association of young Albanians. "It's a shame, all these improvised taxi drivers", laments Daphina, one of the twelve activists who take turns at the frontier. A few minutes and we are in Preševo, where chaos seems to reign. Among Quechua tents, garbage, and people sleeping on the sidewalks, a long line of refugees is standing outside the entrance of the centre. This is where one can get a new laissez-passer by Serbia, after those issued by Greece and Macedonia – another document authorising to cross the country in less than 72 hours. Then, one can take a bus (25 Euros) or a train (8 Euros) for Belgrade. But information is contradictory and frustration is high.

At the train station, where we wait for the midnight convoy, an Iraqi boy arrives in tears. He holds a train ticket and a sheet signed by the Belgrade authorities. In Arabic, he makes us understand that he has everything he needs, but that the conductor will not let him leave. "This is the questionnaire that he received at the border, not the document that testifies to his asylum application. I cannot let him on the train", replies the official. The boy, born in 1990, punches and stamps his forehead against the wall. He queued for five hours at the centre and was told he could travel with that paper. The agents from the centre confirm his version: the questionnaire is sufficient to move around Serbia. Bus drivers are of the same opinion. But at the station there is nothing to do. "Look, I do not know what they're doing at the centre. Even if I let him on, they'll bring him back here, as happened yesterday – several buses departed with people in the same situation and had to come back to Preševo after an hour", swears the border police officer. We convince the young Iraqi to sleep at the camp and get in line again tomorrow, then we leave for the train. It will come six hours late, at dawn.