Belgrade, on the trail of refugees 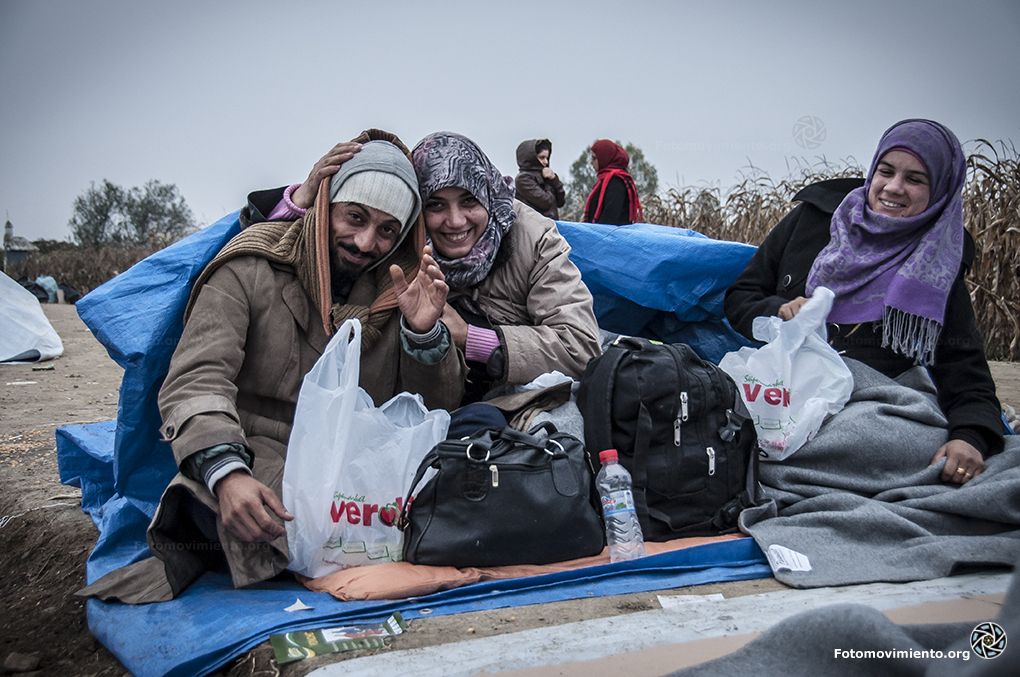 The journey of migrants and refugees from the Serbian capital to the identification camp of Opatovac, in Croatia

Ramiz shows me his picture in front of a lit counter. In Damascus, he was a bartender. “Dry Martini is Italian, right?” He seems satisfied with my nodding. In order to get here, at the bus station in Belgrade, it took him 35 days. The hardest moment was when he crossed the sea from Turkey to Greece, on a dinghy. “The gas had run out in the middle of the sea, another boat helped us out.”

In the park around us there are many tents, more are set up in a smaller lawn on the other side of the road. Hundreds of migrants and refugees keep flowing here from Preševo, in the south of Serbia. The sanitary conditions are bad. There are no showers, only some chemical toilets, not in good shape. The authorities are limited to a few patrolling police. The main international organizations dealing with refugees are practically absent. The Belgrade solidarity, however, is big. Dozens of volunteers work daily in the park to help the migrants through their journey to Austria and Germany.

Aleksandra, a young woman from Pančevo, coordinates assistance at the Miksalište center, at Mostarska No. 5, a few hundred meters from the bus station. There are clothes, food, a medical facility, a safe area for children. Cellphone recharging and wifi is also available. “Everything works through a Facebook page, Refugee Aid Serbia [a similar page exists also for Croatia, Dobrodosli dragi imigranti ]. People bring what is needed, we distribute it.”

Upon entering Serbia, migrants receive a three-day permit in order to cross the country. Aleksandra explains that many now travel directly from Preševo, at the border between Serbia and Macedonia, to Šid, on the Croatian border, without passing through Belgrade. Many people, though, keep on transiting through the Serbian capital, in need of help or money transfers.

The Refugee Help Map provides updated and detailed information for volunteers who want to help along the Balkan trail. Red markers are more urgent

Tijana (23) is one of the Info Park volunteers, a little wooden hut that can be found just a few meters from the sidewalk where the buses from the South arrive. There are Arabic and Farsi interpreters. “We try to give as detailed information as possible on how to continue your travel safely and on how to protect yourself from profiteers. There are people asking off-market prices just to bring refugees to Šid, which you can reach with a simple 10 € bus ticket.”

Rahmatullah, a young Afghan man from a village near Kabul, tells me that for him, the hardest stretch was Bulgaria. “We were afraid of the sea, so from Turkey we crossed directly into Bulgaria, with the help of a trafficker. Then, we walked for three days in the forest, without food. We got lost, till a woman on a car showed us the way.”

In Kabul, Rahmatullah paid 4,000 dollars to a dealer. “They then sell you to other dealers that you meet along the way. When you get to a transfer point you call, and tell them where you are. And then you wait.”

Near the park, there’s a tank truck with drinking water. Some migrants try to wash themselves at the taps. In a little while, here in Belgrade, it will be cold. The Serbian government set up a camp in Krnjača, on the road for Pančevo, but no one wants to go there. Many people fear of being stranded in Serbia.

Most Syrians want to get to Germany, explains a young woman from Damascus, traveling with her sister’s family. “We have finished all our money, and we’re trying to find a way to collect the ten euros each that will get us to the Croatia border. But we don’t want to stop.”

The Šid-Tovarnik border crossing is about an hour and a half from here. To pass, you need a valid passport. About a kilometre from the border, though, some volunteers point to a dirt road among the cornfields. A Serbian boy says it is safe. There are no police checkpoints, and I see a few migrants heading west, towards the countryside. Another “informal” pass is happening a few kilometres up north, in the village of Berkasovo. It is here that most people arrive, with buses that come from Belgrade or Preševo. A Serbian police jeep follows the movements of the refugees from afar. Some youngsters from the Czeck Republic help migrants to safely cross the border.

“We started doing this to defy the position of our government on migrants”, one of them explains to me. “We take it in turns, changing every two or three days, conditions here are intense. But there are already hundreds of people involved in our movement.”

Pictures from the places described in this report are available here

In spite of the recent diplomatic skirmishes between Zagreb and Belgrade, and the harshness shown by the Hungarian government, it is evident that there is an agreement between Serbia, Croatia and Hungary. On the other side of the cornfields, in Croatia, police are waiting for the refugees, to conduct them to the nearby identification centre of Opatovac. From there, they bring them onto trains or buses that go straight to the border with Hungary. And the Hungarian authorities, after having shown thunders and lightings and erected a wall at the Serbian border, now take charge of migrants all the way from the border with Croatia to the Austrian one.

“The rhythm varies from four to six thousand people a day”, says Helena Biočić, an officer of the Croatian Ministry of Interior and spokesperson at the Opatovac camp. Biočić accompanies me inside the camp. Dozens of people are standing in line at the entrance of one of the military tents. “We can host 4.000 people, but until now we’ve never reached those numbers. The migrants stay for only a few hours, then they get transferred to the Hungarian border. We accompany them to the Baranjsko-Petrovo Selo crossing, with buses, or by train from Tovarnik to Botovo.”

The conditions of the camp seem good. People receive food and water, clothing, and can take a shower. Inside there’s also a medical facility and a large Red Cross tent, that acts as a collection centre helping with information exchange for whoever has lost a family member.

An international agency official, talking off the record, explains to me that the situation in Opatovac at the beginning was “a mess”. Apparently some people got lost because the refugees where transferred in groups of 50, and some families ended up spread out over different groups. UNHCR spokesperson for Croatia though, Rafaƚ Kostrzynski, says that the situation has greatly improved since and that the conditions in the Opatovac camp are now generally “very good”. I ask Kostrzynski if being identified in the Croatian camp means not being able to ask for political asylum in Germany, cause of the Dublin rules. He shakes his head. “In theory, if they fingerprint you here you wouldn’t be able to ask for asylum in Germany. Germany, though, openly declared that it wouldn’t use the Dublin exception.”

“You should ask the German authorities.”

Along the Balkan trail, people are working on the field in ever changing conditions, in the absence of an EU structured approach to the crisis. “It is plain to see that a more concerted, more robust and coherent response from the EU is needed, enhanced relocation and resettlement schemes are needed, as well as safe and legal ways to get to Europe”, tells me Kostrzynski. “The agreement on 120.000 asylum seekers and refugees is a step forward, but it is plain to see that it is not enough now. Having witnessed the scale of the movement, we already know that numbers will have to increase.”

In 2015, more than 500.000 people crossed the Mediterranean. Three-thousand died during the trip. The issue of humanitarian corridors has not even entered the Brussels debate yet. From the Middle East, and Afghanistan, each migrant and refugee is paying dealers 4,000 euros, or more, making mafia networks ever stronger.

In the Balkans, along the humanitarian agencies, informal groups of citizens, organized in the most random ways, like the Belgrade volunteers or those from Prague, in Berkasovo, are making Europe from the grassroots. Trying to help, in this Odyssey.