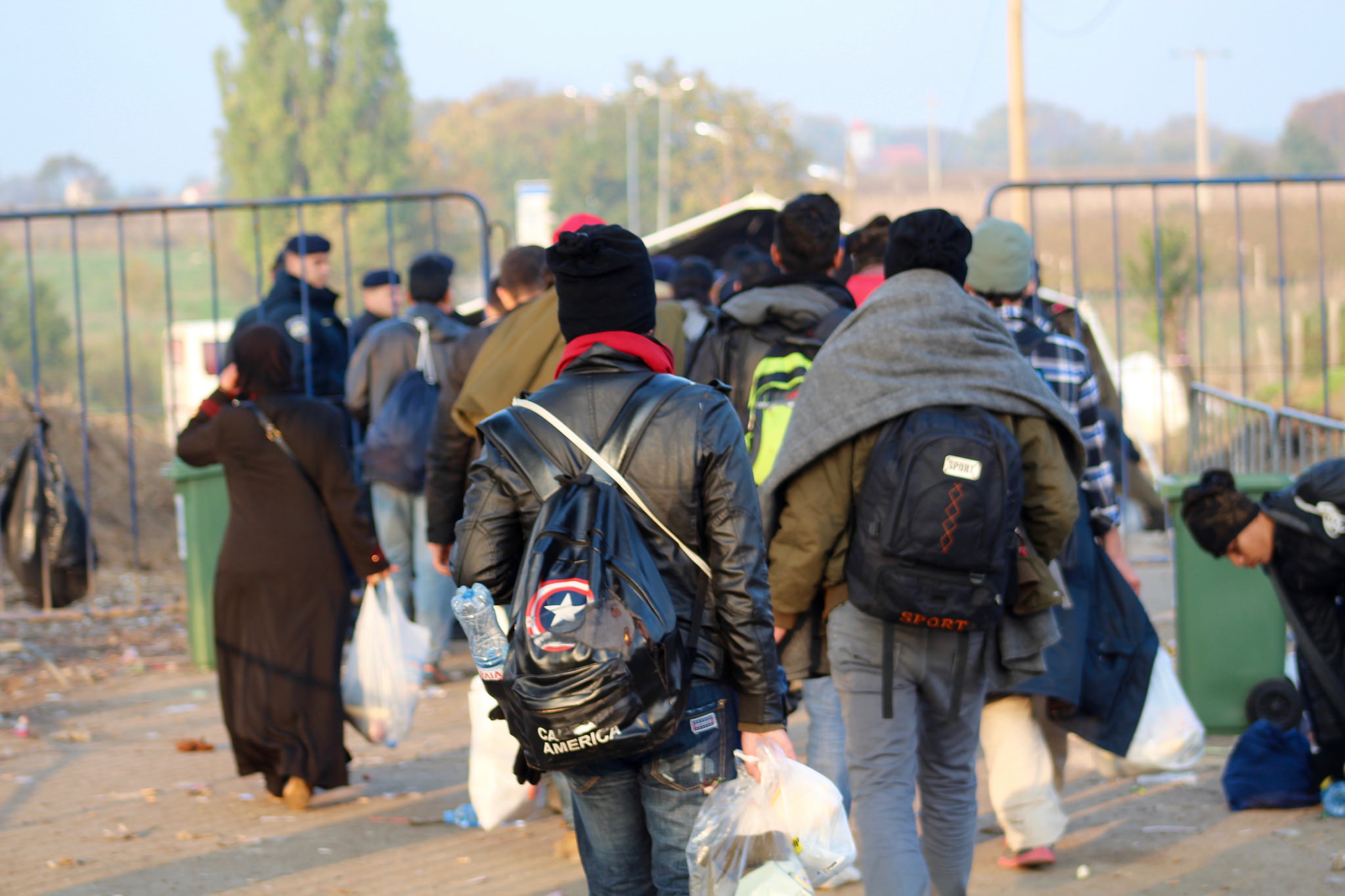 Refugees on the border between Serbia and Croatia (photo: Trocaire )

Two years after its entry into the European Union, Croatia saw the arrival of the first waves of refugees and migrants. With the change of government in 2016, the first instances of solidarity gave way to rejection and violence.

In 2015, for the first time in its recent history, Croatia faced a substantial flow of refugees from other continents. The international attention was then focused on the opening of the "Balkan route", a passage along the ridge of the peninsula that had always existed, subtrack, since World War II. In September 2015, the construction of the wall at the border between Serbia and Hungary diverted the flow of refugees through Croatia, Slovenia, and Austria, to Germany, which had just recently agreed to temporarily suspend the Dublin agreements. In short, several thousand people a day begun to cross the border between Serbia and Croatia. In a European context in which the solidarity discourse was prevalent, Zagreb was no exception, showing its human face to the refugees who entered the country.

"We help those fleeing war and poverty", said Social Democratic Prime Minister Zoran Milanović. Minister of the Interior Ranko Ostojić had made a special effort to ensure a safe transit. "Salam aleykum, my name is Ranko", could be heard in a video in which he welcomed refugees at the border. The government itself posted on its Twitter account photos of policemen helping the children exhausted from the trip. Declarations of solidarity came even from unexpected sources, like the controversial mayor of Zagreb Milan Bandić, who invited his fellow citizens to welcome the families of refugees. Many people, both in the country and abroad, praised the work of the police, while a more or less explicit confrontation hovered with the brutal approach of the Hungarian government.

There was talk of a sense of identification between the Croatian citizens, who had suffered as refugees as well, and those fleeing the wars in the Middle East. The parallelism was even stronger since the passage of refugees took place largely in the Vukovar and Srijem region, which had been fully hit by the war of the 1990s and had gradually reintegrated between 1996 and 1998. The Croatian Centre for mine clearance released a mine-risk land map to prevent fatal accidents during transit.

The situation gradually changed starting from winter 2015-2016, when the rejection of non-Syrian refugees from Croatia to neighbouring Serbia began to increase. Those who travelled by train between Zagreb and Belgrade might have noticed, when they reached their destination, that those who were pushed back to the border had been packed in one of the carriages.

In March 2016, the closure of the Balkan route – decided in succession by the countries of the area – and the signing of the treaty between the European Union and Turkey put an end to the legal flow of refugees. 658,068 refugees had crossed Croatia in the course of a few months, but their flow was destined to continue. Traffickers promptly repurposed their services to those who had been stuck in the peninsula since the closure of the borders and those who continued to arrive, albeit in smaller numbers.

Croatia, governed by the alliance HDZ-Most since January 2016, thus began to protect the EU's external borders, frequently resorting to illegal rejection and violence. Numerous reports by both Croatian NGOs such as the Centre for Peace Studies, Are you Syrious?, and No Name Kitchen, and international organisations such as Doctors Without Borders and Amnesty International , documented the systematic use of violence by the Croatian border police. The Border Violence Monitoring portal has collected an impressive amount of testimonies, accompanied by photographs.

Once stopped by the police, refugees were beaten, threatened with death, robbed of money and mobile phones, subjected to humiliation and torture, such as being forced to stand barefoot in the snow, forcibly sent back to Serbia without having the opportunity to apply for asylum. 3,242 people were expelled from Croatia in 2017, many without having been able to apply for asylum.

That the use of violence is not an exception, but a consolidated practice is proved by the number of testimonies collected among those who tried, sometimes repeatedly, to enter Croatia. Human Rights Watch has recently called on the UN Children's Rights Council to investigate the Croatian approach to refugee minors, denouncing the use of violence and of inadequate facilities, in many cases of detention type. The Croatian authorities responded to complaints by denying the accusations, while the European Union has remained silent.

Paradoxically, however, the European Court of Justice condemned Zagreb in 2017 for breaking the Dublin regulation, allowing unregistered refugees to reach Slovenia without checking their asylum applications.

On the other hand, Croatia, governed since September 2016 by Andrej Plenković, representative of moderate centre-right HDZ party, avoided opposing the European policies on redistribution, contrary to the Visegrad countries. Reducing to a minimum its commitments, it welcomed dozens of refugees from Turkey, thus offering a gesture of collaboration and at the same time using border violence for dissuasive purposes.

The ambiguity of Croatian politics manifested itself strongly in November 2017, when border control policies led to the death of a 6-year-old Afghan girl, Madina Hussiny. Madina and her family, made of 11 children – many of whom were minors – were trying to cross the border between Serbia and Croatia when they were illegally rejected by the Croatian police. On the reverse route, on a winter's night, little Madina was hit by a train.

After the tragedy, the authorities of Croatia and Serbia acted against the family of the little victim, without showing a shred of humanity. The family, which at the time of the accident had been separated from Madina, was able to see the body only after a few days in Belgrade. According to their testimonies, her face was still covered in mud. "They treated her like a dog", her sister would later say to The Guardian , that raised the international attention on the case with a detailed report. After several attempts, the family finally managed to enter Croatian territory and apply for asylum, but was immediately locked up in the Tovarnik centre, where it spent 75 days in detention. Madina's family members, who immediately filed a complaint against the Croatian police with the support of the Centre for Peace Studies, appealed during the detention to the European Council for Human Rights, which ordered Croatia for three times to relocate the family to a centre suitable to the presence of minors.

At the end of May 2018, another episode saw two children fall victim to a border control operation. On the territory of Donj Srb, near the border with Bosnia and Herzegovina, the Croatian police fired at a van, driven by a trafficker, who had not stopped at the attempts to block it by the police. After the shooting, 29 refugees were found inside, including many minors, two of whom were wounded by firearms. One of the two children, 12, underwent the reconstruction of the jaw, pierced by a bullet. The trafficker, who had initially disappeared, was subsequently arrested.

Although one of the policemen claimed to have fired in self-defense because the driver was rushing at him, it is not clear why no other means were used to stop the van. Other refugees lost their lives in the last few months on the Balkan route, which is officially closed. At least four of them drowned in an attempt to cross the river Kupa, on the border between Croatia and Slovenia, where Ljubljana erected a barbed wire fence a few years ago.

With respect to the controversies that arose in all these cases, Minister of the Interior Davor Božinović has declined all responsibility, emphasising the need to control the borders and fulfill the technical conditions set by the European Union to enter the Schengen area, which Croatia hopes to access in 2019. The insistence on respect for the law in stopping the flow of what are now called "illegal migrants" contrasts with the behaviour of the police, which uses violence and sabotages the right to asylum outside any form of legal legitimacy. In this context, the Ministry of the Interior started to press against the NGOs Centre for Peace Studies and Are you Syrious?, "guilty" of supporting the Hussiny family in its attempt to obtain justice for Madina's death, going so far as to accuse them of having links with the traffickers.

Independent Croatia adopted an asylum law in 2003, but saw an increase in the number of asylum seekers only a decade later, on the eve of its entry into the European Union. Most of the efforts, under both internal and external pressures, have been directed towards creating mechanisms to reduce border permeability and restrict asylum applications. From 2015 onwards, Croatian policies have generally reflected the orientations of European politics, moving from the desire to ensure a safe transition to Germany to the criminalisation of solidarity.

For several months now, the Croatian media have been forecasting huge flows arriving on the Balkan route during the summer, and the possibility was mentioned – later denied by the Ministry of the Interior – that the Croatian army would preside the borders under Austrian pressure. Being collaborative vis-à-vis Brussels, Zagreb lends itself to playing its role as a protector, even through the dirty job, of the EU's external borders and policies – policies of closure and scaremongering that, as Boris Pavelić underlined in an editorial in the Novi List newspaper, seem to unequivocally lead to racism and bloodshed.