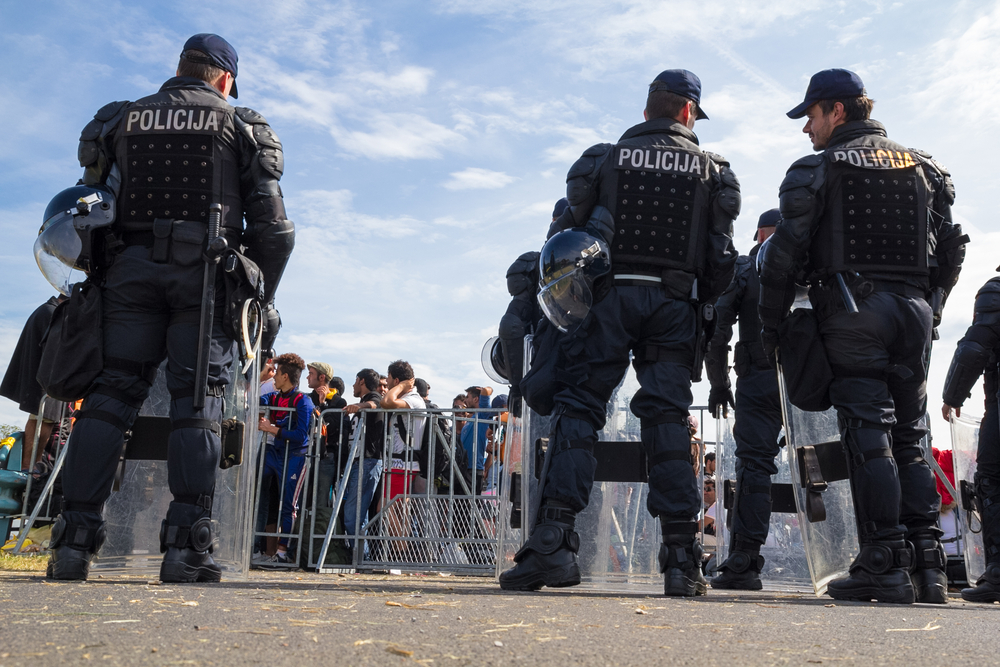 While the world is outraged and protests after George Floyd's death to denounce institutionalised violence, migrants have been beaten and tortured on the Balkan route for years. A brutal practice often covered up, even by the EU itself

George Floyd's death on May 25th sparked protests around the world against police violence and institutional racism. In the Balkans as elsewhere, sit-ins have been held in support of #BlackLivesMatter , followed by calls to report abuses committed locally by the police. And in the region there is no lack of such abuses. In fact, police violence is routine on the "Balkan route", the flow of migrants and refugees that has crossed the peninsula since 2015 in the hope of reaching the European Union. The events of the past few weeks have unfortunately confirmed once again the link between police brutality and immigration, bringing us back to the Croatian-Bosnian border. It is a story of systemic abuse, both proven and covered up, which involves a member state of the EU, candidate for accession to the Schengen area and, according to the latest revelations of The Guardian, the European Commission itself.

When it comes to police abuse on the Croatian-Bosnian border, one does not really know where to start. The accidents recorded in recent years are so many that we can no longer even speak of "accidents", or unexpected events. On the contrary, violence is rather a common practice, the only news being the increase in brutality by the agents, who have gone from illegal pushbacks to outright torture.

"We rarely use the word 'torture' in Europe, but in this case we had to", explains Massimo Moratti, deputy director of the Europe office of Amnesty International (AI). Last week, AI published yet another report of the mistreatment of migrants by the Croatian police along the border with Bosnia and Herzegovina. Mistreatment is an understatement. The testimonies collected no longer speak of broken mobile phones, or – as has happened more recently – destroyed with a screwdriver to prevent recharging, but instead contain "actual sadism", as Moratti puts it.

The case in question is that of 16 Pakistani and Afghan asylum seekers arrested by the Croatian police near the Plitvice lakes between May 26th and 27th. Their testimony is chilling. “We asked them to stop and show mercy. We were already tied up, there was no reason to continue hitting and torturing us", Amir told Amnesty International. Singing and filming on mobile phones, the agents continued to beat the 16 unfortunate men hard, finally smearing their wounds with ketchup and mayonnaise found in the backpack of one of the migrants. Eventually, the group was brought back to the border and forced to walk to Bosnia. Those who were unable to walk, because they are now in a wheelchair, had to be transported by others.

“It is a pattern, a trend. These are the same practices that we have already seen in Hungary in 2015, 2016, and 2017. Dogs, sticks, broken bones... The goal is to intimidate and frighten so that no one tries to cross the border anymore", resumes Massimo Moratti, who adds: "the fractures we saw in the latter case will take months to heal". The Amnesty International report and the attached photos tell the rest.

How did we get to this? It is useful to make a brief summary of recent years to understand the evolution of violence. First, the "Balkan route" became a media phenomenon in the summer of 2015, when hundreds of thousands of Syrians, Iraqis, and Afghans began to travel up the Balkan peninsula to reach the European Union. At the beginning, the destination of the route was Hungary, then, with the closure of the Hungarian wall, it became Croatia, which leads to Slovenia and then to the Schengen area. In 2015, Croatian policemen showed themselves to be tolerant and benevolent, as reminded by this cover of Jutarnji List .

In the spring of 2016, the agreement between the EU and Turkey led to the closure of the Balkan route and a change of pace. “The first case of pushback is registered in 2016 on the Serbo-Croatian border. In 2017, we have the first cases of violence", says Antonia Pindulić, legal advisor to the Centre for Peace Studies (CMS) in Zagreb. At the end of 2017, Madina Hussiny, 6, died hit by a train while returning from Croatia to Serbia following the tracks. Together with her family, she had been illegally pushed back by the Croatian policemen.

In the summer of 2018, the Croatian police fired on a van that carried 29 migrants and refused to stop. Nine people were injured and two minors ended up in hospital in serious conditions. Since then, it has been a crescendo of accidents, especially on the Croatian-Bosnian border, where what remains of the Balkan route passes. Here, the testimonies collected by NGOs speak of beatings, theft, destruction of mobile phones and, as always, illegal pushbacks. Then, the situation has deteriorated up to the torture of the last few weeks. All in the silence of the authorities.

The silence of the institutions

How could the Zagreb government not complete an investigation in four years, address the police abuse, punish the guilty? It just didn't. In fact, Andrej Plenković's government has just "denied everything" for four years, while "no investigation has produced results", as Antonia Pindulić of CMS summarises. And this despite the fact that there have been complaints from NGOs and also the actions of the institutions themselves in Croatia.

"In 2019, a group of policement wrote an anonymous letter to the Croatian Ombudswoman asking to be protected from having to carry out illegal orders", recalls Pindulić. The agents then revealed the pushback technique: GPS off, communications only on Whatsapp or Viber, no official report. Also in 2019, then President Kolinda Grabar Kitarović had let slip , during an interview on Swiss television, that "of course, a little strength is needed when making pushbacks". Later, she said she had been misunderstood.

After dozens of complaints have fallen on deaf ears and after in 2018 the Ombudswoman, in her investigations, had been denied access to video surveillance videos with the excuse that they were lost, the CMS decided a couple of weeks ago to file a complaint "against unknown police officers" guilty of "degrading treatment and torture against 33 people" and "violent and illegal expulsion [of these people, ed.] from the territory of the Republic of Croatia to Bosnia and Herzegovina". "We hope that the prosecutor will open an investigation and that people who have violated the law are identified. But since the institutions themselves have violated the law for four years, I don't know what we can expect", says Antonia Pindulić.

The complaint filed brings together four cases, all of which occurred at the beginning of May 2020. "We suspect that the cases are linked to each other, as all the migrants and refugees involved have reported beatings, theft of their belongings, being stripped and, above all, having a cross drawn on their head with orange spray", says Antonia Pindulić. This very detail had brought the story on the  Guardian and sparked controversy in Croatia.

Towards a turning point?

In their brutality, the cases seem to repeat themselves without any change in sight. But the Croatian government may soon be forced to answer for what appears to be institutionalised violence. Not only the legal action taken by the CMS "could likely end in Strasbourg", as Massimo Moratti of Amnesty International speculates, but a lawsuit filed by three Syrian refugees against Croatia reached the European Court of Human Rights at the end of the May . And last week, after the publication of the AI ​​report, the European Commission announced  that an observation mission will be sent to Croatia.

And there is more. This week, the Guardian also revealed that communications between officials of the European Commission  show how the European body "covered up Croatia's failure to protect migrants from brutality on the border". In question are the European funding received from Zagreb for border security: 7 million Euros, of which 300,000 for the implementation of an independent control mechanism that should have supervised the work of the police. Not only has the mechanism never been implemented, but there have been contradictory communications in this regard, with the Commission declaring that UNHCR was part of the mechanism and the latter publicly denying at the end of 2019 .

In short, although Brussels allocated a (small) budget for the control of the brutality of Croatian agents, the mechanism that was to be activated with those funds was never created. And the Commission is aware of this. How long, then, will the Plenković government manage to hide its system of violence on the Bosnian border?