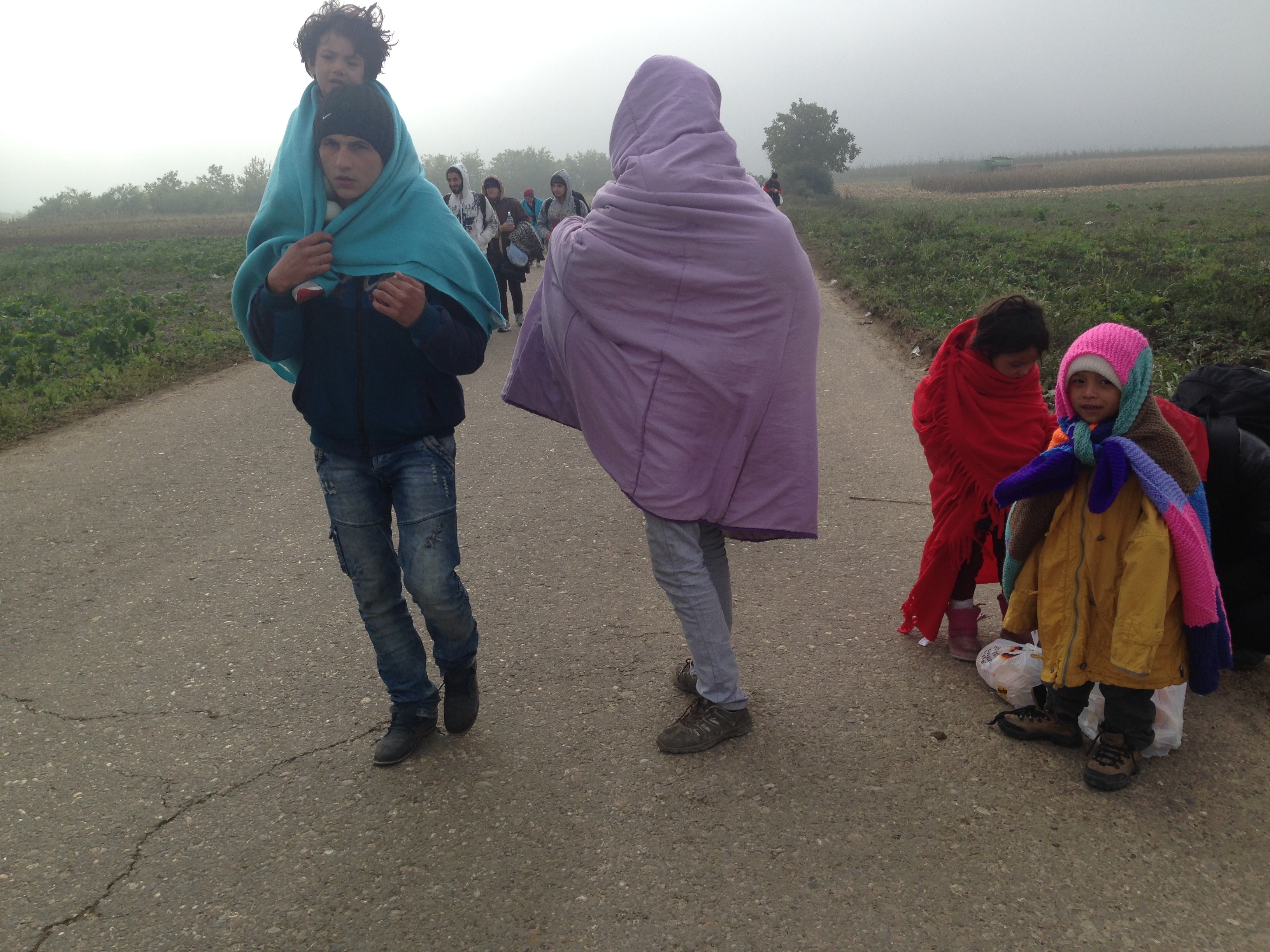 The march towards the Berkasovo crossing point (Foto AOR)

The flow of migrants and refugees along the Balkan trail is turning into a humanitarian crisis, with no recognition of the needs of vulnerable categories. Reports of violence by the Bulgarian police

A group of Afghan boys comes out of the forest heading towards the identification centre in Dimitrovgrad, southern Serbia. They are ragged, dirty, carrying nothing but a plastic bag, if that. The stories they tell about Bulgaria, which they have just crossed, sound like a horror movie. "The border guards’ dogs chased us", tells me Zabiullah, from Nangahar. "Policemen were shooting, fifteen of us were caught, one died. We were in the forest for four days without food." The others nod. The interpreter presses him in Farsi: "You're sure he’s really dead?" "Yes, sure. It happened on Sunday."

Stories about the possible new murder of a migrant in Bulgaria lack a name and a place to prove it. But all stories, even those made by other groups that we meet, are consistent in describing a framework of systematic violence perpetrated by the police of that country towards refugees, particularly in the bordering area with Turkey.

Salar, 25, who works as a volunteer in Dimitrovgrad, tells me that he’s been listening to these kind of stories for days. "They say that when the police catches them in Bulgaria, they take everything from them, money, phone, everything. You can see by yourself, what condition they arrive in.”

Some boys show signs of beatings, and dog bites. A Syrian Kurd, Ibrahim, from Qamishli, coming out of the Serbian identification centre with his wife and children, joins us to explain that he was detained for days in Bulgaria "for no reason". It is not clear in what kind of facility he and the family were held.

Dragana Golubović, of the Serbian Commission for Refugees, explains that between 1,500 and 2,000 people arrive in Dimitrovgrad on an average per week, mostly young people, many minors. She does not allow us into the identification centre where, according to the volunteers outside, conditions are "very basic". The stay usually lasts a few hours. After identification, the refugees are given a 72-hour permit to cross Serbian territory. Outside the centre there are buses and some taxis. To get to Belgrade costs 25 Euros by bus, 200 by taxi. Cash is flowing on the Balkan route thanks to the migrants, even in this remote town of southern Serbia. Many Afghans, however, have nothing but clothes covered with mud, and some look around bewildered. The volunteers try to help, but do not seem too welcomed by the locals, who perhaps consider them as competition. The police arrives, and makes a "no border" tent dismantle, that had been put up next to a van full of clothes and basic provisions. In the evening, the situation seems to improve.

In Preševo, 200 kilometres from here, on the border between Serbia and Macedonia, the situation is different. The influx is much larger. "On Monday [19 October] 8,000 people arrived, but the average is 5-6,000 per day,” explains Slobodan Savović, responsible of the "One Stop" identification centre for the Serbian Commission for Refugees in this town. "Since 8 July, when we opened", says Savović accompanying me through the centre, "200,000 people have come by". 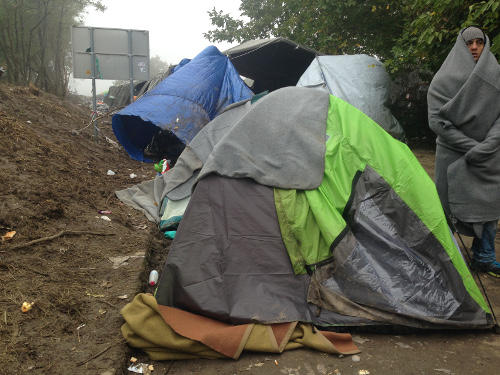 Berkasovo, at the border crossing between Serbia and Croatia (Photo AOR)

The refugees line up in long queues outside the former tobacco factory. After checks with metal detectors, and a bag of food provided by the Serbian Red Cross, people are registered and receive the 3-day permit. "They can also apply for asylum”, explains Savović, “but in practice nobody does".

Unlike Dimitrovgrad, the vast majority of people here comes from Syria. They have families, and there are lots of children. For the Syrians, the nightmare was not Bulgaria, but the short stretch of sea between Turkey and Greece. The amount payable to the traffickers, to board the rafts, varies between 1,000 and 1,500 dollars apiece. The mafia men, however, do not board. They explain how the engine works, and give directions. "We were saved by the Greek navy”, explains a man waiting in line with his children. “The boat was sinking, they took us to Mytilene."

Even in Preševo ​​conditions are very basic. The whole reception system is based on expectations that the refugees will stay only a few hours. Outside the identification center, people selling tickets for the Croatian border wait impatiently. The trip costs 35 euro. Buses, several dozen of them, keep on leaving. Information, and comfort, are provided mainly by volunteers. Among others there are also Vjoleta and Goran, of the Belgrade Women in Black, ("We were in solidarity with the refugees from the Balkan wars, we are in solidarity with the migrants"), and Vanya, a Bosnian girl who arrived in Switzerland many years ago as a refugee herself, and now decided to leave Zurich to come and help migrants through her organisation, BorderFree. 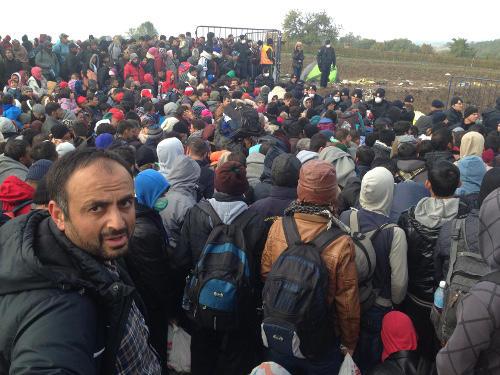 Preševo, a town of just over 10,000 inhabitants, predominantly Albanian, is the main entry into Serbia along the Balkan route. The different streams, the one from Macedonia and the one from Bulgaria, then converge in Berkasovo, just north of Šid, where refugees enter Croatia. If upstream, in Austria or Slovenia, borders close, or the transit slows down, in Berkasovo the situation becomes chaotic. Here migrants have to travel a few kilometres on foot to get to the border crossing that, last Thursday, resembled a Dantesque circle.

Mud, dirt and debris surround a few tents leading to the fences and police lines delimiting the Croatian border. People amass, push, cops yell trying to pass people in small groups. Inevitably, families get separated, while volunteers from both sides of the barricades try to reunite children with their group. It is the children, along with the women and the elderly, who suffer the most in this situation. There is no priority access for them, or for the most vulnerable categories. They remain for hours under the awnings, in the cold and dirt, waiting to be able to continue the journey. If they had to wait more than a few hours, no one knows exactly what would happen.

The flow of refugees and migrants crossing the Balkans is slowly turning into a humanitarian crisis of major proportions. The conditions on the road are not improving, but worsening, along with the weather conditions. But the looks of the people on the run are not changing. The Syrian women, exhausted, walking with children in their arms, stare as if they were on a mission. The Afghan boys have the same gaze. They were given hope. Nothing will stop them, neither the sea, nor the beatings of the Bulgarian police, nor the Orbán wall.