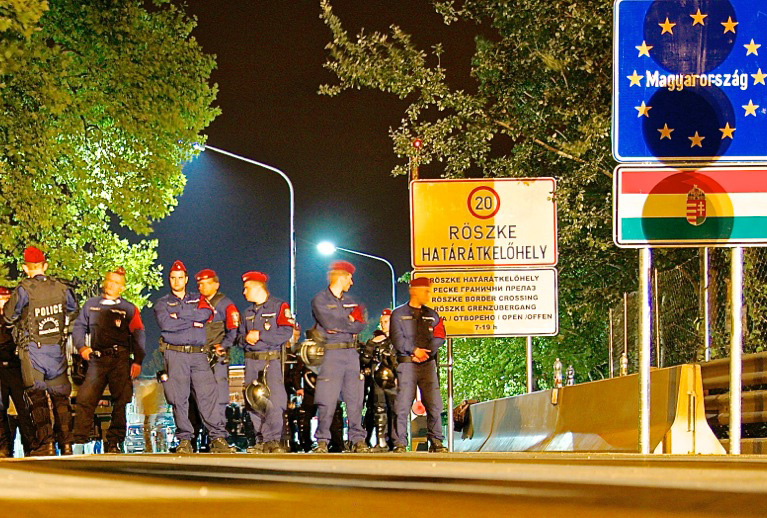 Hungary, the evening when the border was closed (photo by L. Moreni)

The Hungarian wall, on the border with Serbia, casts a first curtain on the Balkan Trail, forcing refugees to change course and head to Croatia, making their journey even more difficult. Seventh and final episode of our correspondent's diary

Everything has changed in the "jungle" of Subotica. In mid-August, this former brick factory housed hundreds of refugees, lying in the shade, waiting to resume their journey to Hungary. Now, less than twenty people are left wandering among the abandoned buildings and rusted scrap metal, in the far north of Vojvodina – and all are departing.

Everyone else is in Horgoš. "According to what the Budapest government said, the border will be open until midnight. After that, we do not know what will happen", says Goran from Doctors Without Borders. "Tonight we'll be there, at the Hungarian border. We should be prepared for anything", he says, after drawing on a paper the map of the border and the path that we must follow. We take a last tour of the ruined factories, then we head to the station, as the sun is almost down. It is only a few hours until the Hungarian border closes, and buses from Subotica fill up quickly. In Horgoš, Orban's wall is about to fall like a curtain on the Balkan Trail.

"You have three hours to cross the border!", a volunteer warns refugees just off the bus. A boy translates into Arabic and we immediately walk to the north. "I am a bit worried", confesses Yezan, 22, from Damascus. He has been on the road for five weeks with his wife, 18. "I fear that the border is already closed, or anyway what will happen once in Hungary". "They won't take fingerprints tonight, will they?".

Like the others, Yezan is concerned about being blocked in Hungary if the authorities decide to comply with the Protocol of Dublin II. "We want to go to Holland", he says. He wants to continue his studies in economics and business and she wants to enroll in the Faculty of Law. They will get through before midnight. The gate guarded by a dozen Hungarian agents delimits the end of the race. From then on, it's standing in line, listening to the directions shouted on the megaphone and translated into Arabic by an interpreter of the Budapest police. In small groups, then in line, refugees are waiting patiently, in the cool of the evening and, at times, under a light rain.

Several associations are there to distribute water, food, and some plasticised cloths to find shelter from water. Shortly after midnight, the flow of arrivals, already small, is completely blocked. "The border is closed. Do you know what closed means?", says an agent to an activist. She runs to Serbian officials, pursued by journalists. "We must find a solution, there are women and children, where will they spend the night?", she asks the agents. This is the first group that remained beyond the wall. Others will be coming soon, from Kanjiža, from Subotica – hundreds of people who knew too late that Viktor Orban's government would suddenly block the road to refugees.

The day after, in Hungary, the atmosphere is surreal. In the cabin of Migszol (the group of solidarity with migrants) in Szeged, open for more than a month in the railway station square, no one distributes any more coffee or water bottles. In Budapest, Keleti seems empty compared with the images of the past few weeks, when thousands of refugees were waiting for a train to Austria or Germania.

Volunteers are folding the tents and packing up the last basic necessities remained. "No one will be coming here anymore", says Lucie, a young Swedish activist of Migration Aid. "We are preparing to move to the border with Serbia. But we are not sure that we will get there, because the transit by car is being blocked, even for us".

A few hours later, on that same border, the Hungarian police will use tear gas and water cannons to disperse men, women, and children who came to ask for the legal protection of the European Union. Thousands of people will be forced to back down a hundred kilometres and head to Croatia, making the Balkan Trail even longer, more expensive, and more exhausting.