Ajvar, son of the sun 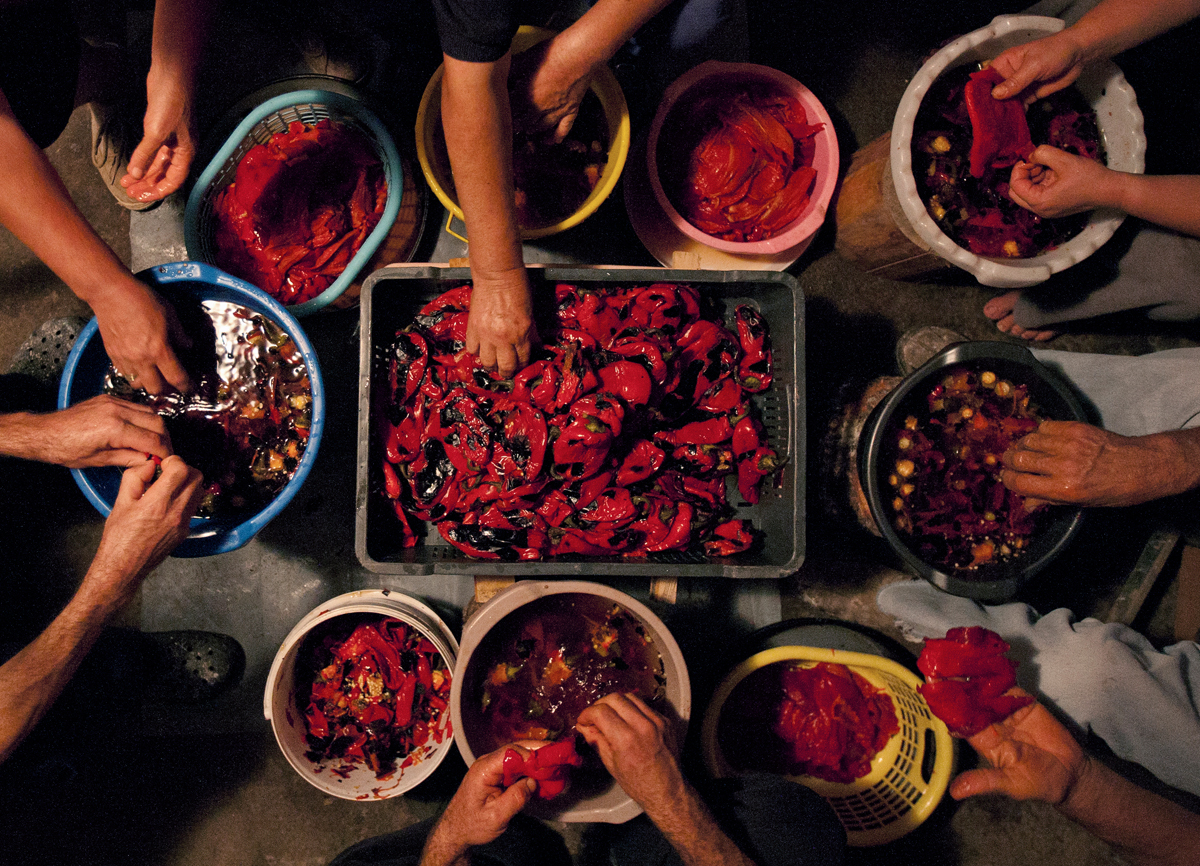 In the region of Leskovac, in Southern Serbia, growing peppers is an art refined over the centuries. The “ajvar” is a fragrant pepper paste that comes with soft cheeses and pork meat. Our report

"Sun and water, water and sun. But above all, the sun". With his hands, unhurried, wisely, Stevica feels the bright, fleshy peppers, streaked by reflections of a warm early autumn morning. "Our ajvar is born this way, from a simple, basic combination. It is a distillation of this earth, the soil, and the sky that makes it fruitful and alive".

Brestovac, Southern Serbia. Two thousand five hundred souls, a few kilometres north of Leskovac. We are in the heart of the "land of peppers" – or rather "paprika", as the golden fruit is called here in Serbia. And, of course, of the ajvar, fragrant pepper paste (sweet or spicy), queen of the "winter salad" (zimnica) and an essential on the table throughout the year.

The Ajvar (ancient word of Turkish origin, by etymology close to the word "caviar") is produced in many countries of the Balkans. In recent years, many have been contending to claim the exclusive of the original recipe. In Serbia, however, there is no doubt that the "Leskovački Ajvar" is second to none, thanks to the age-old tradition, the unique climatic conditions, and the sun that, on average, here shines for 270 days a year.

Mistaken by many as a simple dressing, the Ajvar is actually much more – it does accompany corn bread, cured meats, soft cheeses ("sir"), and smoked pork, but for those who produce and know it, it also occupies an independent, very special place among the delicacies of the table.

Everything starts from the field of paprike of the Marković family, just a few kilometres from the village. From here, the view sweeps away: south-east towards the dark outline of the mountains on the border with Bulgaria, to the west in the direction of the hills that rise towards Kosovo. Or to the quiet majesty of the valley of the Morava river – broad, wavy, caressed by the warm, southern wind coming from Macedonia.

"Autumn is the season of collection and production", says Stevica, the head of the family, making his way through the long rows of red grapes. "From the beginning of September to the end of October, we do not stop for a moment. Everything is done by hand: Ajvar requires patience, dedication, and a close family. Just like mine", he adds proudly, a smile spreading rapidly up to his sky-coloured eyes. While we chat, his wife Suncica, his brother Miodrag, and his grandfather Slobodan continue to collect and fill large jute bags, which are then loaded on the tractor standing at the sides of the field.

Following the violent disintegration of Yugoslavia, and the economic crisis that has accompanied it, the territory around Leskovac is now almost entirely de-industrialised, and pollution levels are minimal. The Marković family, however, pays particular attention that the crop is free from chemicals and harmful substances. As a "herbicide", for example, they use a recipe as old as ingenious: nettle, left to soak in water for a few days, and then sprayed on the leaves in order to lower the pH, thus making them indigestible to parasites. The end of the rows is marked by a low hedge of fragrant basil plants, with almost faded, but shiny leaves – another remedy passed down through generations to keep away unwanted guests.

The journey back from the fields to the village is short, just long enough to say bye to other neighbours who come and go, always on tractor. All are involved in the collection of paprike. "Around here, each family cultivates them, without exception" nods Slobodan, for years a teacher in Brestovac's elementary school. "There are other crops: potatoes, corn, cabbage, even vines and fruit trees. But here the pepper is a source of life. Literally".

However, reaching the market, especially for small producers, is a challenge that becomes more difficult every year. Sales channels, often informal, do not guarantee a regular income in times of crisis. And counterfeiting and misuse of the name "Leskovački ajvar" further limit sales opportunities.

"There is only one way to make it: to join efforts and bet everything on quality and the guarantee of the origin of the product", explains a few days later Miodrag Zdravković director of the association "Leskovački Ajvar", in his home on the outskirts of Leskovac. The association, counting 36 members (including the Markovićs), produced about 40 thousand "tegle" (cans) of ajvar in 2011. The primary goal, however, by the end of 2012, was to get the recognition of the Denomination of Origin. "A key step to protect our products, but also consumers. Because buyers have the right to know what they are eating".

In the Markovićs' large courtyard, meanwhile, the bags are downloaded quickly, and the paprike immediately immersed in a bath of iced water. Washed and shiny, they go straight to the white heat of two coal stoves, obtained by sawing in half sturdy steel drums and placed in a large shed behind the house.

The peppers crackle and sizzle, giving rise to a dense, penetrating smell that fills the air. Slobodan and Miodrag turn them continuously with measured, careful gestures. "Hard to say how long they should cook: there are no rules, no precise timing", says Suncica from the shed's doorstep. "No point in clocks or scales: what matters is the experience accumulated over the years".

Once burned, the peppers are peeled – a patient, meticulous work, which occupies the whole family, and often the whole neighbourhood. "This work, apparently humble, is a very important moment for the family, and not only from the economic point of view", says Miodrag – convinced, peeling fast, obviously in a good mood. "When you peel the paprike you are in a circle, and you look into each other's eyes. We open up, talk to each other. Sometimes, of course, we end up arguing. But that's how bonds become stronger, deeper".

After a night of rest, the paprike are chopped. Then, the pepper paste is put into a large aluminium pot, called "kazan". The cooking begins. "It should not boil, but fry", says Stevica, fiddling with a big wooden paddle. "You have to arm yourself with patience and a lot of energy, because everything must be stirred by hand from start to finish". During cooking, which lasts a few hours, few other essential ingredients are added: salt, sugar, sunflower oil, and wine vinegar. "After a couple of months", confesses the master of the house behind a half smile, "I cannot even stand the smell of the ajvar for a while".

When ready, the product has lost half of its original volume, but gained unique consistency and smell. From the kitchen at the ground floor, Suncica calls us. Lunch is ready. On the table we find "sarme" (stuffed vine leaves) stuffed with rice, peppers filled with minced meat, broccoli soup with semolina dumplings and eggs, tasty and delicate. At the centre of the table, a pair of "tegle" of ajvar, still warm, spread their fragrance. They look like two purple suns, tamed by knowing work of the ancient, tenacious people of Brestovac.