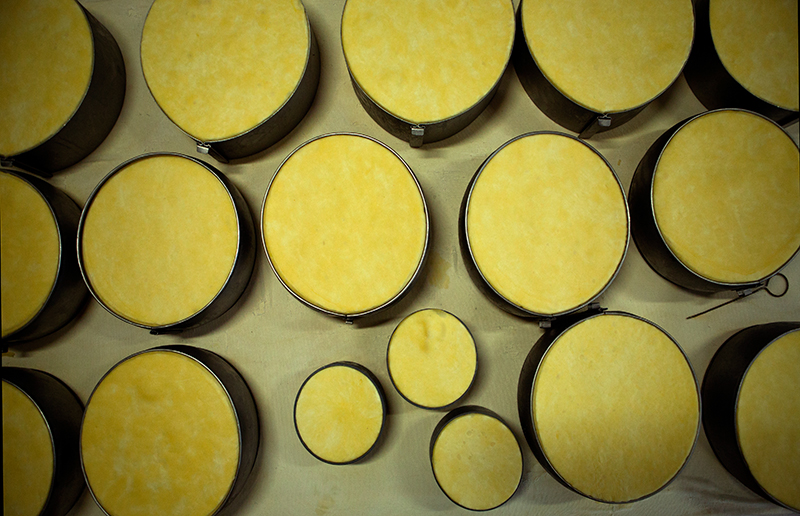 The "pirotski kačkavalj" is much more than a mere cheese, it is the symbol of ancient traditions and an integrated economy that has shaped the Pirot region, in South Serbia, for centuries. A symbol currently at risk, due to emigration from the area and economic difficulties, but one which the students of the local "Mlekarska Škola" are trying to preserve

Nenad Antić's hands run quickly over the cheese paste he just salted. It is warm and soft; he grabs it and throws it in a big, round aluminium container. Over and over again, in an ancient gesture. A few sharp moves, and the pirotski kačkavalj is shaped. It will be turned over several times during the day and then sent to age in the storehouse.

Pirot, southeastern Serbia. In the labs of Mlekarska Škola, the institute for the processing of dairy products, Nenad and his colleagues start work before dawn. Mlekarska is both a factory and a school – here, experts like Nenad teach young students to make yoghurt and cheese spreads, but most importantly to preserve the centuries-old tradition of pirotski kačkavalj.

“It is much more than a semi-hard, spun, paste cheese.” We are in the school's lively corridors with Professor Radoslav Pejčić, passionate champion of his town's cultural and culinary heritage, now coordinator of Pirot's Slow Food chapter. “It has been this region's treasure and symbol for centuries, travelling from Thessalonica’s port to Alexandria and then into markets all over the world.”

Strategically situated along the river Nišava, on the ancient road to Istanbul (the Via Militaris of Roman times), Pirot has thrived for centuries on the only source of wealth that its harsh lands provide: the lush pastures of Western Balkan slopes (here called Stara Planina, the “old mountain”) that allow intensive sheep husbandry. 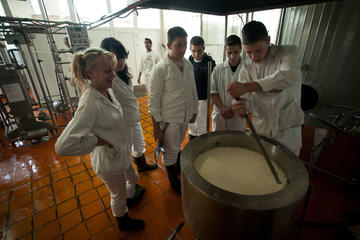 Sheep means wool and milk, products that have characterised the town's economy since the Ottoman domination. On the one hand, the precious ćilimi carpets, famous for their extraordinary quality, creativity of design, and beauty of colours. On the other, dairies and especially the pirotski kackavalj, made to reach the sultan's table.

Ćilimi and cheese are two sides of the same coin – they speak of an integrated economic system that made the most of local resources, could find an outlet in the markets, and brought wealth back into town.

Slow food and wine and food tourism more at large are cross-cutting themes of a number of Actions of the SeeNet II Programme, in terms of enhancing and promoting local products and also regarding the inclusion of a number of them in tourist itineraries, for example the 'wine and dine routes' – see the Action in Herzegovina and Dubrovnik lead by Tuscany and the Action lead by Veneto in Istria and Varaždin. The food and wine component is also an integral part of the SeeNet Actions on responsible tourism, such as the development of of farm holiday places in the Bosnian mountains lead by Piedmont. Slow food is also relevant for the Actions related to small medium enterprises, as some of the firms invest specifically in the production and promotion of heritage foods and so on. 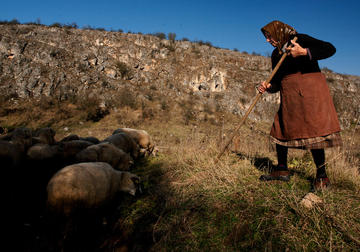 Dairy production remained important with the creation of Yugoslavia after WWI and climaxed in the fifties, when over 400,000 sheep were reared in Pirot and the region. Most of them belonged to two indigenous breeds – pirotska pramenka and pirotska pramenka oplemenena, selected by local breeders over the centuries. This is when the Mlekarska school was founded and attracted students from Serbia, Macedonia, Bosnia and Herzegovina, and Croatia – a “miniature Yugoslavia”, as it was termed. Studying in Pirot meant finding a job easily. The school was renowned and the Yugoslav food industry worked at full capacity.

“The first radical change was in the sixties, with the industrialisation process wanted by Tito,” says Professor Andrija Hodžić, back to Mlekarska as a teacher after working in Belgrade's food industry for some years. “Most of the work moved to the factories and many mountain villages started to become depopulated.”

Nonetheless, breeding and cheese production remained active. In the Yugoslav self-management system, breeding remained private, while all the region's milk was bought by Mlekara Pirot, the big public dairy factory that sold kackavalj on the national and international markets, including exotic destinations like Israel and the United states. The same years saw the beginning of the massive export of lambs, mostly destined to the Italian market.

The system worked until the bloody wars of the nineties and the end of Yugoslavia. Pirot, not far from the Bulgarian border, was far from the war fronts, but the country's collapse destroyed its economy. Almost all factories were privatised and then shut down. Of today's 67,000 inhabitants, over 15,000 are unemployed. In 1994, Mlekara Pirot shut down too.

“Since then,” continues Professor Pejčić over a strong, hot cup of coffee in the school's busy cafeteria, “cheese-making in Pirot has virtually stopped. Today, paradoxically, with about 4,000 litres of milk processed every day, our institute has become the main producer in town.”

In the present conditions, preserving the tradition of pirotski kačkavalj is no easy task. The true kačkavalj, as is done in the Mlekarska Škola, needs to age in two phases – one “hot”, in an aired room at a constant temperature of 22°, for about a week; one “cold”, for three to six months. Obviously, all of this makes the final product more expensive.

“Today most producers lets the kačkavalj age for no longer than 24–48 hours,” continues Pejčić. “On the Serbian market, where consumers have been impoverished by the crisis and unemployment, offering cheaper products, even at the expense of quality, is a strategic advantage.”

Even foreign markets, once a natural outlet, are almost out of reach. Burdened by its recent past, Serbia struggles on the path to EU membership, with immediate consequences of export opportunities. The main difficulties, however, stem from the collapse of traditional husbandry. Of the 400,000 sheep of the fifties, hardly 18,000 now remain in Pirot. Even the Mlekarska Škola is forced to produce mostly with cow's milk or a mixed compound.

This article has also been published by the Italian SlowFood magazine, March 2011 edition 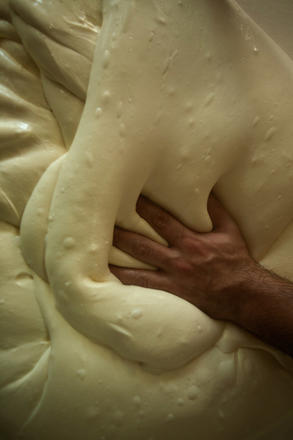 It only takes a few-kilometre drive out of town and a climb up on the beautiful, tortuous roads that lead to Stara Planina in order to realise how much the escape from the mountains damaged what was the heart of the region's economy and provided the producers of pirotski kačkavalj with their precious raw material.

The village of Rsovci, for example, has a hundred inhabitants, mostly elders. In the fifties, the population was a thousand.

“When I was young, in Rsovci, we used to have almost 20,000 sheep.” Djordje Ćirić, 73, does not conceal a hint of pride while leading a small herd to pasture just out of the village. “Today there are few hundreds, small herds like mine, 30–40 sheep.”

The village, lying along the crystalline waters of the Visočica river, has not lost its charm. Yet, most of the houses, built – not without elegance – in stone, mud, and wood timbers, are empty.

“Everyone ran to Pirot, Niš, Belgrade. Or abroad,” says Cura Jovanović, owner of a modest, yet cosy bed and breakfast at the entrance to the village. “Making a living out of husbandry has become almost impossible. The milk is consumed here in the village. If anything, cheese can be sold to faithful customers who come up here to eat something good.”

Only two young people are left in Rsovci: Nebojša and Slavoljub. Nebojša, who just turned 19, graduated from the Mlekarska Škola. “I would like to stay, be a farmer like my father, carry on the tradition of kackavalj. But, it is hard. There are two resources here, farming products and the uncontaminated beauty of our mountains. If well used, they could bring life back into our villages.”

Despite his young age, Nebojša knows what he wants. “Institutions need to do something to help, and to do it quickly. Otherwise, nobody will stay here, and I will leave too. The risk is for not only the kačkavalj to disappear, but also centuries of history and traditions.” The passionate work of Professor Pejčić and the young students of the Mlekarska Škola is a small, yet important step for this not to happen.