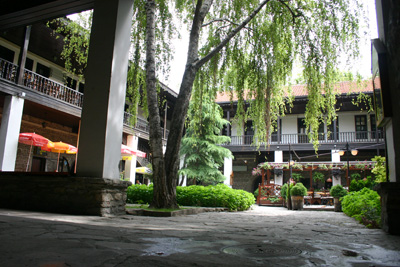 The 'Kapan An' in Skopje

The Old Bazaar is the ancient heart of Skopje. Today it's but a pale remnant of what it once was: a bit dirty and dusty, but still brisk and dynamic. The Old Bazaar, though, is waiting for its next rebirth, and to gain back it's central role in the economic and social life of the city

Some people would say it is nicer than the famous one in Sarajevo, but that would likely infuriate the Bosnians. It is definitely bigger. The key item on menu is the same, or is it not? It is of course the "čevapi" or as called in Skopje "kebapi". The Balkan contribution to international cuisine. But in Baš Čaršija in Sarajevo they are served with sour cream. In the Old Bazar (Stara Čaršija) in Skopje they go with the "tavce" - baked beans served in a terracotta pot. One has not had a full Skopje experience if he/she has not tried the kebapi and tavce in the Old Bazaar. The basic unit measure is ten. Westerners often find ten to be too many.

The Old Bazaar is the ancient heart of Skopje. It is the old Skopje. It was the centre of the economic, social, and cultural life for centuries. It stretches from the Stone Bridge to the Bit Pazar, the major open market in town, on the left bank of Vardar river.

All until 20 years ago the Old Bazaar was the nucleus of city life. Then Skopje became too big, too spread out. The Old Bazaar today is but a pale remnant of what it once was. A bit dirty and dusty, but still brisk and dynamic.

In its present form it was built by the Ottoman Turks in the 15th century, but it did of course exist much earlier. There was much trade going on already in Roman and later Byzantine times, and it is merchants from Dubrovnik and Venice who are credited to have actually founded the Old Bazaar. Old Byzantine documents confirm negotiations with Venice authorities granting certain privileges to their merchants in the area.

Then came the Turks end 14th century (took control of Skopje in 1392, and from there continued into today's Serbia and Bosnia), and having liked the place, they stayed for the next five centuries. Macedonians sometimes say that they only become aware of how much Turkish they speak and can understand when they go to Istanbul.

It was in the 15th century that many of the Old Bazaar's landmarks were built: the bezisten - a trade facility. Something akin to a 15th century shopping mall which for a time in the 1990s hosted some of the coolest bohemian coffee bars in Skopje, frequented primarily by art students. Part of the academy of fine arts is hosted with the nearby Suli An - a caravan saray, or in present parlance, a place to stay. It is one of several Ans (asylums, Ottoman hotels) that are to be seen in the Old Bazaar. There is Kurshumli An, today a museum, but perhaps the most beautiful one, in the very core of the Old Bazaar, is Kapan An. Still operational today, Kapan An hosts shops, bars, (very expensive) restaurants, and even NGOs. Back in the 1990s some of the hottest live rock gigs in town took place there.

The Old Bazaar also hosts the major mosques in Skopje, including the grand Mustafa Pasha mosque, but also one of the major churches - Sveti Spas. The old Kale is just next to it. The amams (public baths) are scattered all over it.

In many ways the character of the Old Bazaar remained unchanged over the centuries. It still hosts the traditional workshops of artisans and craftsmen, in addition to the many novel businesses selling just about anything. A street called the "jewelers' street" hosts most of the traditional jewelries in Skopje.

Back in the 16th century the Old Bazaar had 1053 shops (today likely many fewer) and produced hefty tax revenue for the Sultan. It was divided into specialized craft districts and even had night watchmen. In that period of time, which was the highlight of the Old Bazaar, the population of Skopje was predominantly Muslim. It was an Ottoman town, with Turk families strongly outnumbering Christian ones. But the bazaar and economic opportunity attracted people from afar, Arabs, Armenians, Jews. Around that period of time Jews from Spain and Portugal formed a small colony in the city and around 40 Jewish families are reported in Turk records from the 16th century.

Then, in 1689 Skopje was hit by a disastrous earthquake, as a few times before in its history. Once every few hundred of years Skopje is crashed by an earthquake. Two big ones are reported, around the 5th and 10th century. The last terrible one was in 1963. The Old Bazaar was destroyed. Some of the major edifices remained, but it lost its economic drive. It had to start all over.

Today, the Old Bazaar is waiting for its next rebirth. Rebirth as a cultural hub of the city. It is economically as dynamic as ever. But it has been neglected and tarnished by transition as has everything else around. In many ways it has lost its glitter and its role as a heart of Skopje. Tourists besiege it of course, but many locals choose to go elsewhere.

The people, the young people, have to go back to it, and than it will resurge again. As many times over its history.