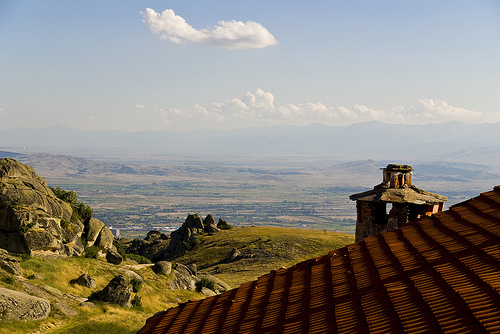 Often only the most determined tourists get there, those who do not give up when they meet the first obstacles. But when (and if) they get there, they find oases of peace and serenity. Macedonia's monasteries, a unique resource for tourism

Through the centuries they have given shelter to travelers. Their konaks (guest quarters) offered hospitality and their walls protection to solitary people on journeys through the Balkan backwaters. They had entire estates, libraries, wine cellars; they organized farming, and scholarly work. In the early medieval ages they were hubs of spiritual, intellectual, and economic life.

Then came centuries of decline during the Ottoman Empire. Under communism their primary role of maintaining monastic life was marginalized. They served primarily as monuments of culture.

It was only in the first years of post-communism that monasticism started to return to the monasteries. It was then that their role of providing shelter also started to be restored, obviously adapting to contemporary conditions. It is referred to as monastery tourism: a combination of return to nature, a cultural and spiritual experience.

There are around 30 “live” monasteries in Macedonia at present. About a hundred more have no monastic function and serve as monuments. Many have been restored in the past two decades, their konaks rebuilt or expanded. They are generally open for visitors.

Some of the cultural and artistic heritage they have been safeguarding for centuries is priceless. Gradually, over recent years, many of them have also started offering accommodation to people in search of peace and tranquility, as they are traditionally located in some of nature’s finest resorts.

Monastery tourism naturally comes with specific rules attached. They may vary from one eparchy (Orthodox diocese) and monastery to another, but they generally involve respect for monastic rules, a daily routine, a certain amount of discipline, eating in the monastery kitchen, attendance at at least one mass a day, and so on.

Eight kilometers from Tetovo, in the North-Western Macedonian village of Lesok, there is the Monastery of Lesok (Lesocki Manastir). It was built in the 14th century and it became especially important in the 19th century when it was the work place of Kiril Pejcinovic, a reformer, who restored it and turned into an important educational and literary centre.

Repeatedly destroyed through history, once in the 17th century by the Ottomans, most recently during Macedonia’s ethnic conflict in 2001, it has learned to rise from its ashes.

The place has a special significance for Macedonian identity and culture. The Monastery of Lesok has been among the first to start promoting monastery tourism in the country. It has recently started expanding its accommodation capacity to 120 beds. Located at an altitude of 600 meters, it offers mountain lovers a perfect base for hikes towards some of Shara Mountain’s peaks.

The authentic experience of monastery lodging is usually combined with modest prices. Monasteries usually charge very little for the service (as low as 5 Euros per night), since the motivation is not to make a profit but to bring people closer to their spiritual and cultural ancestry.

Nevertheless, the wider economic impact is easily observed. The Monastery of Sveti Nikola is located at the edge of the village of Manastir in Mariovo, one of the most beautiful but also most depopulated and poorest areas of the country.

Sveti Nikola was built in the 11th century and it was one of the original sources of monastic life in the area. Since the revival of monasticism several years back, life in the village, which had previously ceased completely, has also slowly started to revive. The restoration of the monastery konaks has been underway which would open the way for more visitors. This could bring life back in the village and help the economic revitalization of the region.

Quite a few monasteries in the country offer accommodation services to tourist. The fascinating Jovan Bigorski, which was unfortunately damaged by a recent fire , the monasteries of Sveta Bogorodica in Veljusa (11th century) and Sveti Leontij in Vodoca near Strumica. More and more Macedonian citizens have been showing an interest in this type of tourism which combines nature, meditation, and escape from city life.

The potential is more than obvious. The development of monastery tourism can help rural revitalization; it can serve as an avenue of growth of the tourism sector which is now mostly concentrated around the Ohrid Lake resort. It can generate the revenue needed for restoration and maintenance of the country’s historic and cultural heritage, most of which is associated with these ancient shrines.

The road ahead is long. Progress so far has been more a result of the enthusiasm and entrepreneurship of individuals than a strategic effort. A clear vision is lacking both on behalf of the church and the government. Every kind of tourism, monastic one included, could benefit from some sound management efforts.

An anecdote used to describe such lack of management in Macedonia describes how a group of foreign tourists were denied a visit to see a famous fresco in the Monastery of Sveti Gjorgji in the village of Kurbinovo, because the monastery superintendent was in a hurry to go to a wedding. Another story tells us about a monastery clerk who did not let a group of Japanese tourists into the premises simply because he had a bad day. Such elderly grumpy custodians are often the sole administrators of monasteries of invaluable cultural significance.

Roads in Macedonia are poor in general, not to mention the little winding ones stretching to the secluded monastery locations in remote rural and mountainous areas. Many monasteries can be found only by the most determined foreign visitor who does not give up. One cannot expect monasteries to get into advertising, but occasional information on the existence of such places on the web would not be a bad idea.

Despite all of this, the potential is obvious. Both for diversification of the tourist experience as well as for local development. To the traveler who is tired of the omnipresent noise and crowds associated with mainstream tourism, visiting a monastery might offer some peace of mind.