Kosovo: a battle for souls 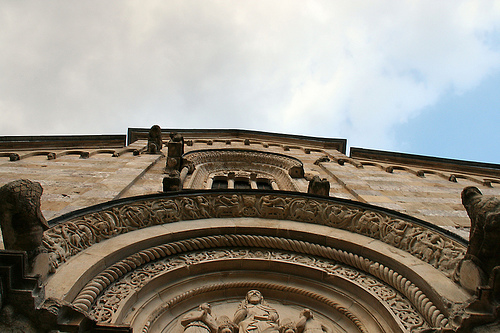 On April 4 on a crystal night at the foot of Prokletije mountains, Bishop Teodosije and his brotherhood held the Midnight Easter Liturgy in the ancient monastery of Visoki Decani. In the candlelight of processional cressets, blurred by the haze of incense that spread its fragrance through the monastery chambers, the monks cantillated harmoniously.

Under the light of candles, the monks were harmoniously cantillating with the cressets’ bells, blurred in the haze of incense, which spread its fragrance over the monastery chambers.

The gurgle of the garden water fountain echoed from the yard and the scent of hot meals drifted in from the kitchen nearby. After the long winter and fastening, it smelled like a rich morning feast.

Inside the cold, thick, glossy stone monastery walls, dozens of believers, among them Italian and Swedish soldiers, kept the five-hour vigil and shared the elation of the greatest Christian holiday.A common believer would hardly guess that behind such serenity and holiday idyll there could be anything more than the tranquility of monastic life.

But the Southern Serbian Orthodox Eparchy has been ruffled by surprisingly determined actions from the Serbian Orthodox Church to resolve a long-running controversy surrounding Simeon Vilovski. Vilovski is the former secretary of the Kosovo Serbian Archbishop and is accused of negatively influencing the eparchy's activities...and the Bishop himself. He was accused of fraud involving several hundred thousand Euros belonging to the Church.

The southern Serbian orthodox Eparchy, though, is rippled by surprisingly stormy and determined actions launched by the Serbian Orthodox Church to unknot a years-long affair caused by the negative influence of Simeon Vilovski, former secretary of the Kosovo Serbian Archbishop, over the Eparchy’s activities and the Bishop himself, including Vilovski's alleged involvement in the fraud of several hundred thousand Euros.

The affair culminated shortly before the beginning of the Great Fasting, when Serbian Kosovo Archbishop Artemije was replaced and retired Herzegovina Archbishop Atanasije was appointed as the Interim Administrator of the Kosovo Eparchy. This was soon followed by a sensational news avalanche: monks were caught on tape fighting in front of Gracanica Monastery. Afterward, Vilovski fled to Greece where he was captured and arrested. Predrag Suboticki, owner of a private building construction company close to the Kosovo Serbian Church, was then arrested in Belgrade. Vilovski and Suboticki are considered to have been the key figures in all of the Eparchy’s business for the past five years.

For the Serbian public, such news came out of the blue. The Serbian Orthodox Church is very influential in Serbian society and, in particular, in Kosovo. Many Serbs have turned back to the church in the decades since state communism. For born-again believers with strong national sentiments and a lack of critical thinking, the news instigated various interpretations, including the theory of a great conspiracy against the Serbian nation.

Kosovo Serbs are even more connected to the Serbian Church and see it as a symbol of their sacrifice and suffering. The Church is also the only Serbian institution that stayed with Kosovo Serbs after 1999.

Vilovski and Suboticki are charged with carrying out massive fraud and other illegal and immoral acts. The Serbian media reported for days on the long list of alleged illegal businesses of the Bishop's closest allies: money laundering; purchase of expensive furniture, luxurious limousines, and high rent for business properties in Belgrade; the payment of high fees, salaries and phone bills for some suspicious associates of the Archbishop and for some expensive lobbying agencies in America; purchase of a flat in Greece; investments in a civil pension plan for Vilovski; illegal tenders procedures; and the awarding of a monopoly over the entire process of reconstruction of church sites to Suboticki’s company. All such expenses were paid for out of charity funds, diaspora donations, other donations, and the government’s investment.

For those familiar with Church affairs, such news was not a surprise. The Church had launched their own official investigation a few years ago and confirmed the criminal charges. On several occasions, The Holy Synod has since strongly pleaded with Archbishop Artemije and tried to convince him to take over control of the eparchy and to press church charges against his secretary. However, since the Serbian orthodox archbishops are autonomous in their eparchies, the Synod did not attempt other measures.

Serbian officials complained that the archbishop never obeyed. Artemije remained faithful to Vilovski. He justified ignoring the Synod’s recommendations by arguing that archbishops have autonomy in their eparchies. Meanwhile, his followers relentlessly attacked the Holy Synod, labeling it a “communist” and “illegal” church organization.

Since the time Simeon Vilovski became Artemije’s closest associate five years ago, serious religious clashes as well as political fights have emerged within the Kosovo Eparchy. Vilovski began to condemn some monasteries for their participation in Pristina's government reconstruction of orthodox churches and monasteries desecrated and destroyed in Kosovo. But that's just the top of the iceberg under which lies much deeper hatred and conflicts of interest.

Simeon and his followers - and even Archbishop Artemije - didn't hide their deep animosity toward the Decani Monastery (the Serbian religious community in closest contact with the international community and orthodox believers worldwide) and accused its leaders, Archbishop Teodosije and Monk Sava, of betrayal and ecumenism.

Last summer a news story about an incident between Vilovski and the Decani Monastery brotherhood made the front page of Serbian newspapers. Vilovski then tried to replace the father abbot Teodosije and a monk named Sava and to expel them from the monastery.

The Archbishop Artemije is believed not to have been involved in the frauds of his associates, but he is blamed for disobeying to Holy Synod and for his failure to administrate his eparchy by letting other people do his job. He was temporarily removed from the key position until church officials could discuss his case at the next Synod’s assembly. His Archbishop title was not taken away from him. Finally, after a long resistance, the Bishop accepted the Synod’s decisions. Sources familiar with church issues believe that his return to his earlier position is almost impossible.

Apart from the corruption charges against his closest associates, the strongest objections raised against him point to: his mystification and politicization of the church; the intensified glorification of monastic life and monasteries in public; the establishment of “sectarian groups of ultra-orthodox believers with a recognizable dress code” - in particular the case in Northern Kosovo; the “putridity of religious life in the Eparchy behind the false image of Kosovo’s defense and orthodoxism”; and the church’s alienation from the common people through bragging and the pride of smaller groups of radical believers.

Criticism also pointed to alleged attempts to stir division inside the Church. In contrast, the Synod reported that a new administrator and his monks would depoliticize the church and enable it to do its essential job: work with people and hold liturgies.

While waiting for the Synod Assembly’s decisions, a new administrator, the retired Archbishop Atanasije, continues his offensive by visiting believers and institutions and by serving liturgies throughout Kosovo and Ras monasteries. The new administrator is sending a message to common people that they should come to church freely and is passionately trying to inspire people to rally around the church in liturgies.

The retired Archbishop Atanasije is known for his energy, his unique temperament, and his vocabulary. As soon as he arrived in February, he took over control of the web sites of Banjska Monastery and Kosovo Eparchy which, until recently, were controlled by Artemije’s people and were known for publishing radical political press releases.

Atanasije has simultaneously launched a virtual offensive by publishing texts in English and Serbian about the new life in the Eparchy, emotional and colorful messages to believers, as well as very harsh, almost threatening, announcements for “minor groups of monastic insurgents”, “parasynagogas”, ”disobedient presbyters and religiously uneducated people,” “arrogant parsons”, and “newborn theologians”.

He is addressing the monks of the Crna Reka and the Sveti Arhangeli Monasteries: these monks, together with dozens of their faithful believers, declare themselves to be “Artemije’s spiritual children”. On the Internet page of Crna Reka Monastery, one can read a protest letter from the monks – including one by the same Simeon Vilovski - to the new Serbian patriarch.

These monks refuse to accept the Synod’s decision to appoint Atanasije as the administrator in their eparchy. They accuse him of detaining the Archbishop Artemije and warn of a huge Serbian loss of faith and threaten a possible tragic outcome. With such rhetoric they are currently rallying smaller groups of their most faithful followers.

Still, Bishop Atanasije is firmly holding the helm of the church community. Symbolically (and strategically), he is focusing his attention on the northern part of Kosovo (mainly inhabited by Serbs).

Atanasije served the first morning liturgy after Easter in South Mitrovica in the remains of the city’s former church, Sveti Sava, which was set on fire during the March, 2004 riots. He then paid a visit to North Mitrovica Hospital whose management had, until recently, sided with former Archbishop Artemije.