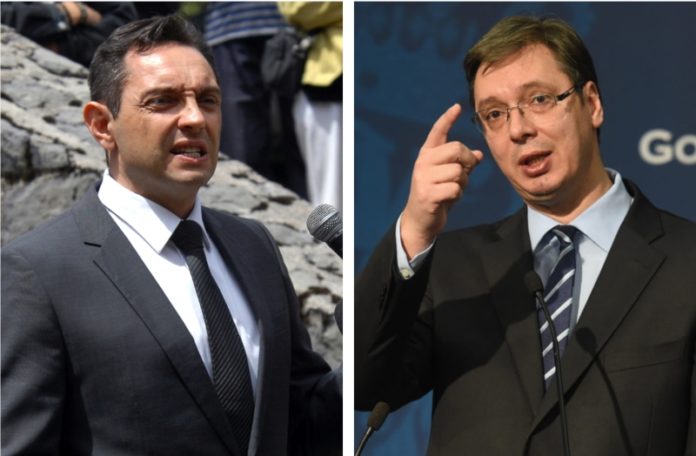 According to the Minister of Defense, Serbia should part ways with Brussels; for the President of the Republic the European road is not under discussion. Simple divergences, political crisis, or usual two-voice game for two different audiences – local and EU?

Vulin released the controversial statement when replying to Sem Fabrizi, head of the EU delegation in Serbia, who had said that the resolution of the Kosovo question is a necessary precondition for Serbia's accession to the European Union. President Vučić said that he saw nothing problematic in Fabrizi's statement and was well aware of the fact that the Kosovo issue is the main obstacle to Serbia's progress towards the European Union. "There is no fear of a change of course in Serbian foreign policy. If someone wants to change it, they will first have to get rid of me and the parliamentary majority", said Vučić.

The divergences on the country's main political issues cannot undermine the stability of the ruling majority, since Vučić and his Serbian Progressive Party (SNS) hold absolute power over the Serbian political scene. Vulin is a member of the ruling coalition, and even if he really intended to change something in foreign policy, he could not do so without Vučić's consent.

Vulin is regarded as a pro-Russian politician, and his stance on Serbian foreign policy was supported by the Foreign Minister and leader of the Serbian Socialist Party (SPS) Ivica Dačić, also very close to Moscow. The SPS is the main partner of Vučić's SNS in the ruling coalition, which also includes Vulin's Socialist Movement.

Positions such as Vulin's stir concern and dissatisfaction in the pro-European public opinion. However, there is no indication that this is an organised political move that could lead to a turning point towards Moscow. Russia would certainly like to strengthen its influence on Serbia, but has no sufficiently strong local allies. President Vučić continues to look towards Brussels and Washington and speaks increasingly openly about an imminent agreement with Kosovo.

In recent days, Vučić has publicly exchanged views on Kosovo with the Serbian Orthodox Church, which believes that Serbia should not give in to pressure, but wait for a more favorable moment to address the question of the status of Kosovo. Reacting to the position of the Church, that he sees an attempt to freeze the conflict, Vučić said that Serbia cannot wait and that key political decisions are not up to the Church.

Most analysts in Belgrade believe that the clash between Vučić and Vulin on the priorities of Serbian foreign policy is a political game, by now customary, by which the leadership wants to send a message to both the international community and the Serbian public. The SNS and Vučić want to show the international community that their attempts to normalise relations with Kosovo are meeting strong resistance, while leading the local public opinion to believe that they are still fighting for Kosovo to remain an integral part of Serbia, despite being subjected to increasingly strong pressures.

The main target of these messages are the voters of nationalist orientation, mostly supporters of the ruling coalition, which hardly accept the idea of ​an agreement on the normalisation of relations with Kosovo. Vučić cannot survive politically without their support, and is aware that it will be very difficult to change their minds, but at the same time he is aware that Serbia, if it does not solve the Kosovo issue, will have to face serious economic and political problems.

Almost all countries in the region have already joined or are preparing to join NATO and the European Union. If Serbia decides to take another path, it may be forced into isolation. Since 80% of Serbian foreign trade takes place with the EU and the countries of the region, it is clear that, if it were to abandon the path of European integration, Serbia would plunge into an economic crisis with unpredictable consequences.