Aleksandar Vučić: from deck hand to captain of media control in Serbia 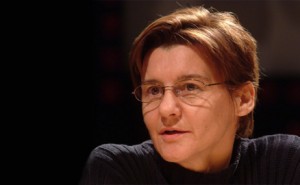 Svetlana Lukić, editor of "Peščanik": the long rule of the Democratic Party, Boris Tadić, and his court set up a mechanism of media control. Vučić - once Milošević's minister of Information- inherited it and added his own, Šešelj-style, "charm"

For the last few weeks, one of the main topics in the Serbian media has been – Serbian media. It all started from the major floods which destroyed parts of the country. Then, texts that criticised the government's response to these tragic events began to disappear from blogs and websites. Internet portal "Peščanik " was most hurt, blocked by hacker attacks which lasted for days. The strongest attacks came after the portal – which systematically criticized the government of Aleksandar Vučić – published an article in which Interior Minister Nebojša Stefanović was accused of plagiarizing his doctoral thesis at the "Megatrend" private college, and it was then discovered how the rector never obtained the Ph.D. title he boasts in his official biography.

According to the portal, hacker attacks come from the servers of the college itself, but also from dozens of other servers outside of Serbia. Peščanik's servers are still subject to attacks; two days ago, the site was brought down again. Aleksandar Vučić's government launched an investigation into the attacks, while at the same time contributing to create an atmosphere that leads to increasingly frequent censorship and attacks on media freedom in Serbia. "H-Alter" spoke about the situation of Serbian media and Peščanik itself with Svetlana Lukić, one of the founders of cult radio show "Peščanik" and the eponymous web portal.

What is the current situation with Peščanik?

The attacks lasted for ten days, and the site is constantly being changed. The site is currently working, although attacks still continue. These days we are moving to a new, more powerful server – not just for better protection, but also because of the large increase in visits. In the meantime, we have established a legal team which, if needed, will defend us pro bono. The vast majority of our authors and contributors also works pro bono...and will work to defend ourselves, at all costs.

Some media suggest that Aleksandar Vučić's government is behind it all. Vučić, however, announced detailed investigation against hacker attacks and denies any involvement...

Both former Serbian president Boris Tadić and current prime minister Aleksandar Vučić are responsible for this situation. One day, five years ago, virtually no one in Serbia was able to listen to our radio, as someone had interfered with the signal; during the broadcast in the parking lot in front of Radio B92, our car was demolished and our site taken down. The then president publicly promised "clarification" on these cases, but absolutely nothing happened. Now, Prime Minister Vučić expressed "great concern" over the attack on our site, and nothing happened. Nothing different was to be expected. While he expressed concern over the attacks, his minister of culture and information claimed that the websites were taking themselves down for some technical reasons. On the other hand, the head of the division for high-tech crime said that reading various forums he realized that we, in fact, have a terrible server. This is an old and boring Serbian game in which one of you is listened to and taken care of, while their closest collaborators are treated as incompetent idiots who jump at every chance to play victims.

Did you expect such a reaction following the publication of the text which accuses the Serbian Interior minister of plagiarism?

Even though it was clear that we would be punished for publishing the text which proves that our Interior minister plagiarised his Ph.D. thesis, we did not expect such a brutal response. This testifies about our stupidity, because questioning the integrity of any of Vučić's chosen ones means to anger the Creator itself. This was clear to our colleagues in the media who got the text before us and refused to publish it. When we published another text which proves that the Police Minister's mentor Mića Jovanović is a trickster and a charlatan, that he never received his doctorate in England, as he claimed, it was like a leftover bomb exploded in Serbia. This is understandable, because now famous Megatrend University was created during the wars; it was founded by war profiteers from Milosevic's party, the very same party of Ivica Dačić, until recently prime minister and police chief. Millions of Euros from Megatrend's tuition fees went in planes and yachts for the owner, rector, and mentors, but also in high salaries of current and former Serbian ministers who teach there. Some money clearly goes to some media and "intellectuals" too and, judging by recent statements, Megatrend can be reasonably understood as an extortion racket. Now that Jovanović has fallen from grace, everyone tries to distance themselves from him to make this go away as soon as possible.

In the meanwhile, the rector has resigned. Will this case have political consequences like the resignation of the minister of police?

The day after the publication of the article about the plagiarism by the police minister, Vučić made it clear to us all that he would not sacrifice his minion. The arrogance, aggressiveness, and stupidity that he demonstrated on this occasion signalled many participants in the "public debate" that they should turn a blind eye or two on Mića Megatrend. Meanwhile, Vučić invented an international conspiracy to overthrow him, involving – in addition to us – the OSCE, the opposition, foreign ambassadors, parts of the police, the Illuminati, the Bilderberg group...some media and part of the academic community are still trying to go back to the plagiarism by the Minister of police, the accreditation of Megatrend, the state of education in Serbia...but all this pales before the new "conspiracy" and "mafias" that are fabricated, now on a daily basis. It is obvious that Aleksandar Vučić will not give his disgraced minister of police up, and a large number of media consciously boils the whole scandal down to the case of the minister's mentor.

Serbia has better and better relations with Brussels, which in turn stands for clear respect for media freedom. How do you comment?

In Brussels and Berlin, he is still a "cooperative" partner, they like the text that speaks about Kosovo and EU integration. As long as this doesn't change, he can do pretty much what he wants in the country. Of course, when he oversteps his bounds, like in this case, he will get a slap on the wrist, so he will have to think twice before screaming at a European institution or organization again. He can yell at us as much as he wants, even though it is pure excess: bribery and intimidation of journalists has proved to be quite the effective mix. The only reason he still cannot peacefully sleep the sleep of the just is the Internet; there is no Karlovac there, no Karlobag, no Virovitica, no borders with the EU. Even during the election campaign, some of his less intelligent associates boasted that they have an army of 5,000 trained and equipped for warfare on the Internet. They boasted about the successful deletion of some video clips from the Internet, destroying blogs...but, in the meantime, someone explained that these things work if you do them in the underground, without boasting and telling the whole world about it.

Vučić wanted absolute power and the citizens gave it to him. When he looked closely at the brink Serbia stands on, for a short time he was relatively sedate, he talked about the deficit, the budget, economic reforms...when the water sank half of Serbia, he tried biblical metaphors to hide from us, but also from himself, the monumental incompetence of the state and its institutions to preserve our lives and even a bit of property. After realising he would not enter history as someone who spent half his mandate reviving Serbia and the other half enjoying the gratitude of the people, he decided to change the picture of reality. And who could help him more than the media? The economic collapse that followed, social tensions, and the anger of the disenchanted people led to ever more brutal crackdowns on the media and journalists, of the kind we can remember watching in the film "The Matrix".

How do other media report on these topics?

For these few days, visits to Peščanik have enormously increased, and the other media are no longer able to ignore the issue, it was everywhere...when they realized that further defending the "doctorate" of Megatrend Rector could bring more harm than good, they decided to sacrifice him in order to preserve the "doctorate" of the minister of police – and thus, not only Vučić's saintly halo, but also the collaborators he would need in the nearing show-down at the top of the police.

Are such cases part of the broader media and media freedom landscape in Serbia?

In a decade and a half, after the fall of Milošević, we never managed to fight to uncover who owns which media. It's always aunts, uncles, non-existent firms, law firms...in such ownership circus, journalists must by definition be clowns, who for coins entertain the audience.

How were journalists and independent media faring under Boris Tadić and what is the difference between the current government and those that preceded it?

The long rule of the Democratic Party, Boris Tadić, and his court, set up a mechanism of media control. Vučić inherited it and added his own radical, Šešelj-style, "charm". After all, he learned the trade of media attrition as Milošević's minister of Information. Now that he went from deck hand to captain, sky is his only limit. Political and financial pressures and blackmail destroyed most of the media already during Tadic's government. Censorship annihilated many once independent media. However, the new master of Serbia, according to his political biography and character, is more into intimidating than bribing. If this continues, he will no longer be needing money to pacify the media, it will just take some shouting, or throwing in mention of a crackdown on the "media mafia". This phrase can encompass anyone: those journalists who work for the other party, the other parts of the State Security Service, other people's tycoon...but also us, those who ask, for example, if the number of casualties and the material damage from the floods could have been lesser if the state had done its job in time, or, if a fraud can stay in office as minister of the police.

Can you draw parallels between the journalistic profession in Serbia and in other countries in the Balkans?

As far as I can see, the state of the media in neighbouring countries is very similar. I used to believe journalists should be tried before the Hague tribunal for the crimes committed during the wars of the nineties. Now I think a lot of journalists from the Balkans committed a deadly sin taking part in the destruction of their country, their institutions, elementary moral norms...actually, in the making and maintenance of the food chain in which, now, millions of people occupy a very bad place.