Serbia: the video that Vučić failed to hide 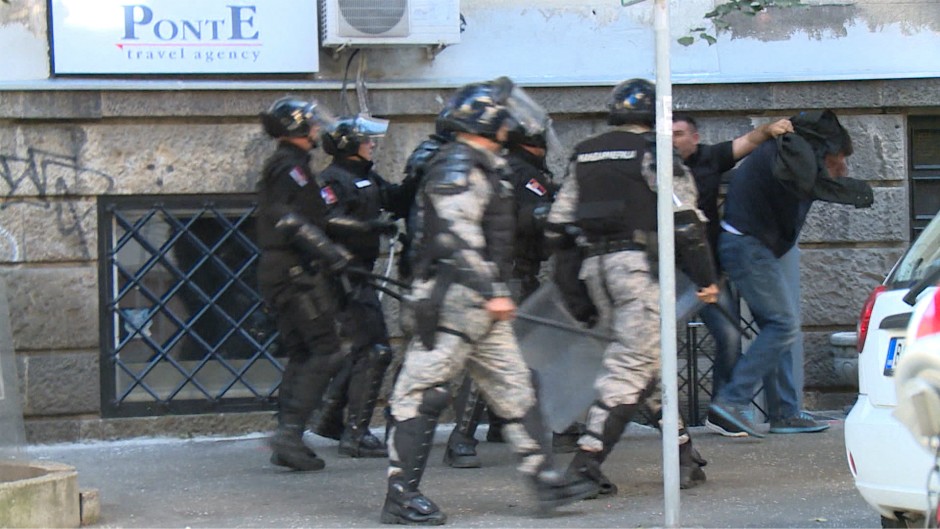 Footage from N1 TV of the clash with Andrej Vučić (ph. N1)

Media not aligned with the regime are still under pressure in Serbia. Recently, President Vučić has targeted TV channel N1 for broadcasting exclusive videos that he would rather have hidden

Serbian President Aleksandar Vučić likes to present himself as a democrat devoted to the integration of his country into the EU; a leader who brings stability and reconciliation to the region; a politician working every day to pull Serbia out of poverty and turn it into a paradise for investors. With this message, Vučić has gained the trust of international institutions and of most Serbian voters, who have been supporting his regime for five years now.

His daily efforts – public appearances, statements, and interviews – aimed at creating an ideal image of himself as a politician dedicated solely to improving the lives of citizens are hampered by the few journalists and media outlets who dare to ask uncomfortable questions and report vicissitudes and failures that he would rather hide.

It is on such occasions that President Vučić demonstrates all the strength of his autocratic power, that has allowed him to discredit almost all the institutions of the country and gain direct control over most of the Serbian media.

Almost daily, we are forced to listen to accusations, launched by Vučić and his close associates, against journalists branded as traitors who act against the state; journalist associations allegedly receiving money from abroad to fabricate scandals; mercenaries to the penny of foreign powers threatening the government and the president himself.

So, the Serbian channel of the N1 regional television broadcaster was recently targeted by Vučić for showing exclusive footage of an incident dating back to three years ago, having the president's brother as protagonist.

The scandal that Vučić has failed to hide

The incident took place on September 28, 2014 during the Belgrade LGBT Pride, which is always a high-risk event characterised by a massive presence of law enforcement and the predisposition of a well-defined, enclosed space reserved for the march of the members and supporters of the LGBT community.

During the previous edition, held in October 2010, 140 people were injured and over 200 far-right extremists were put into custody for attacking citizens and vandalising the city centre by burning cars and breaking windows.

So, no surprise when – four years later – police forces were massively deployed to ensure the safety of the event. Numerous teams of journalists covered the event, and N1 cameras filmed a group of agents beating up civilians. As they filmed, journalists were unaware of the identity of the victims, and only later received such information from the police officers who saw them filming.

That same day, N1 TV broadcast the video, reporting – based on the information received from the police – that among the victims were Andrej Vučić, brother of then-premier Aleksandar Vučić, and Predrag Mali, brother of the mayor of Belgrade, as well as some members of the Kobre special military unit that escorted them.

It turned out later that some agents, deployed along the perimeter of the area destined for the event, had stopped Andrej Vučić, his friend, and members of their escort, and – without knowing who they were – had asked them to show their documents. Their refusal and attempt to forcibly move along had triggered the brawl.

The criminal proceeding is still ongoing against eight agents involved in the incident, accused of abuse of office and outrage to public officials in the exercise of their duties, as well as mistreatment and torture. The trial was also attended by N1 journalists who had filmed the controversial episode from a short distance. The footage is the main evidence in the ongoing trial.

Meanwhile, many other issues have emerged that go beyond the scope of this trial. One of them, still waiting for answers, is why the family members of the former premier and the mayor of Belgrade had a military escort, which, according to the law, they were not entitled to.

Attacks and intimidation instead of answers

Every time he has been asked about this affair, Aleksandar Vučić has reduced it to just another attack to his family members and himself. Recently asked, during a programme on Pink TV, about some articles revealing the identity of the men responsible for the attack on journalists during the protest at his settlement ceremony, Vučić responded with a counter-question and new accusations.

"And what about those who beat my brother... are they not thugs? I did not show my tears in public, though I cried for 24 hours. Today, I'm pretty sure that he was deliberately beaten because he is my brother", said Vučić, adding ironically: "and, by coincidence, an American TV [N1, ed.] was just there to film it".

This statement has certainly reached the judges in charge of the trial, and the verdict will tell how they took it.

Reacting to the president's allegations, Jugoslav Ćosić, director of N1 Serbia, revealed the pressures received for the video of the beating. On social media, Ćosić wrote that Vučić's biggest lie is that the team knew that "his brother would be beaten". He also revealed that on the day of the accident he received a phone call by Aleksandar Đorđević, then chief of Serbian intelligence (BIA).

"He told me that Vučić's wish was for us not to release the video of the accident during the Gay Pride. We did", said Ćosić, adding that "after rejecting the suggestion of the head of the BIA not to broadcast the video of the incident featuring Andrej Vučić, I refused the same request from Vučić's head of public relations".

In an interview with Cenzolovka portal, Suzana Vasiljević, Vučić's head of public relations, confirmed the call to Ćosić, explaining that "it was not pressure", but "a friendly request" not to immediately release the video, in order to prepare Andrej's mother and daughter for the news.

N1 is one of the few media outlets in Serbia still resisting pressures and doing independent information. This regional broadcaster – with production facilities in Belgrade, Zagreb, and Sarajevo – is owned, as the official website says, by the United Group company, whose majority shareholder is the KKR investment fund based in New York. The European Bank for Reconstruction and Development holds a share in the capital of the broadcaster, which is the exclusive regional partner of the CNN network.

N1 broadcasts exclusively on cable and covers about 60% of Serbia's territory. In addition to Serbia, Bosnia and Herzegovina, and Croatia, the channel is also visible in Macedonia, Montenegro, and Slovenia.

Such ownership structure and coverage area, an editorial team composed of well-known professionals, and the fact that Serbian citizens mostly seek information through electronic media are sufficient reasons to turn N1 into a threat to the leadership in power, that is in every way seeking – and largely succeeding – to gain control over the media.

This is not the first time that President Vučić launches heavy charges against N1. In January last year, N1 reporters asked him to comment on a photo showing Health Minister Zlatibor Lončar in the company of the leader of the Zemun clan, involved in the murder of Prime Minister Zoran Đinđić in 2003.

Instead of answering, Vučić accused N1 of collaborating with drug cartels, with "known criminals convicted of drug trafficking and selling drugs to our children", without providing any explanation for such allegations.

N1 is not the only media outlet to suffer from almost daily pressure and denigration by the president, his staff, and regime journalists who support him unconditionally. From the outside, Serbia projects a very different image – but from the inside, the horizon is getting darker and narrower for anyone who seeks answers and questions Vučić's "absolute truths".