A Pope in a symbolic land: Albania 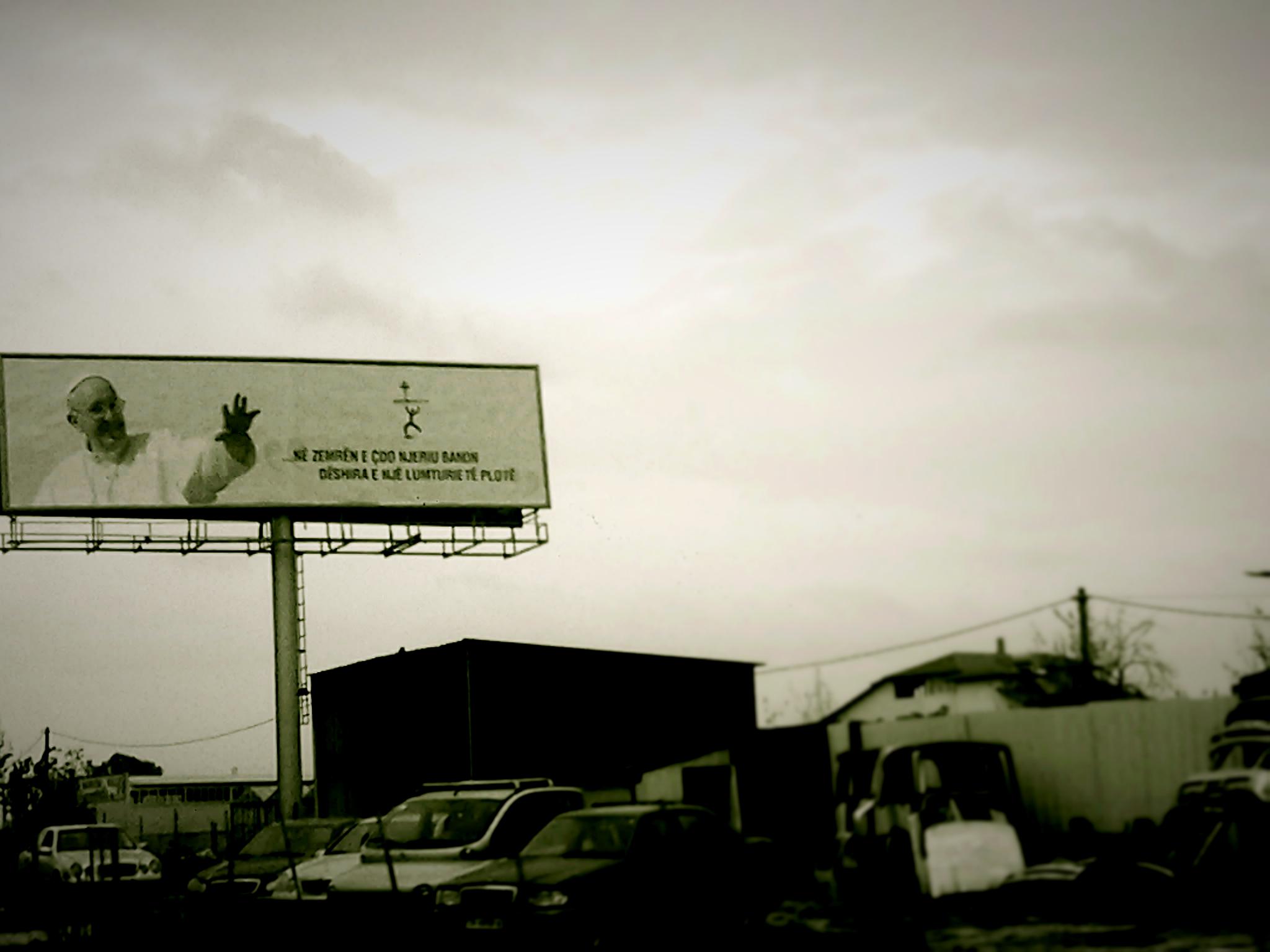 For his first European journey, Pope Francis chose Albania, a land that has become a symbol of interfaith dialogue. The visit was experienced with great expectation by the majority of Albanians

Like most citizens of Tirana, I had already decided to participate in this historic event – at least because of the impressive preparations witnessed in the previous days and the atmosphere of expectation in which the capital had, almost reluctantly, fallen asleep at the eve of the visit. Eyes close, and then the long-awaited dawn knocks on the windows of the faithful and the curious: it is Sunday, but the alarms ring, people get up slowly, quickly leave the house.

Severe thunderstorms occurred throughout the night: the morning is grey and the sky is overcast; but the air is fresh and coffee tastes better. Maybe because there are no cars: for a whole day –, unrepeatable spectacle – the centre of Tirana will be a giant pedestrian area. Kids on their own, groups of families, all the people who are walking in the streets are directed towards the centre. At half past eight, after a quick police search before entering the "red zone", Mira, Sokol, and I arrive on the boulevard that leads to Piazza Nënë Teresa, where the great Mass is scheduled at 11.

We quietly settle behind the barriers, but to find a place in the front row we have to move back hundreds of meters, almost to Skanderbeg Square. From there, the glance to the south is impressive: the two cords of the crowd are already practically formed. Mira shows me the security snipers posted on the rooftops of the ministries of the fascist period. I should be scared, but I do not have time to, because the transmitters of the cops in front of us spread the news that all were waiting for: the Pope's flight is on the tracks of the "Mother Teresa airport" - generally known as "Rinas airport". A strange restlessness makes the air electric: nothing is more contagious than anticipation. 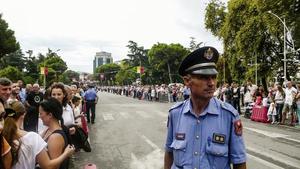 I pull out my phone and browse the Italian press. Apparently, the Pope's Albanian day will be longer than that of the faithful flocked from all over Albania and the neighbouring countries: after the welcome ceremony and the Mass, he will meet with representatives of other religions at the Catholic University "Our Lady of Good Counsel", celebrate Vespers in the cathedral of Tirana, and – before leaving – greet the children of the Betania association and other charities.

The program of Pope Francis' first visit to Europe was known since July 31st. Normally, the Pope's visits are announced one year in advance, but the trip to Albania was decided just a few months earlier. Even Bishop Vasil, Secretary of the Congregation for the Oriental Churches, disclosed his surprise while trying to interpret the suddenness of this choice: "This announcement was a novelty for me, but it is part of a trail of signs of Pope Francis... The Albanian Church, like the very Albanian community, is located at the crossroads of different cultures, roads, and religious worlds, and we know that for decades the Albanian population suffered under a regime that formally declared itself atheist. So, the visit of the Holy Father plays a crucial role and meaning in this context..."

The roar of the helicopter and the roar of the crowd distract me from reading: the Vatican delegation is coming. As I put the phone back in my pocket, I think that in order to really understand why the Pope has come to Albania it is not enough to look at the present, but at the history of this country.

The complexity of Albania's religious landscape is well summarized by the flag that makes the hearts beat of all Albanians in the world, regardless of faith. Even before becoming the seal of the Skanderbeg family, the double-headed eagle was a heraldic symbol widespread throughout the Byzantine Empire. Ironically, the flag that today unites a country with a Muslim majority reproduces an Orthodox symbolism that during the enterprise of Skanderbeg was even a banner of the Roman Church – following his exploits against the "infidels", Pope Callistus III honoured Albania's national hero with the titles of "Athlete of Christ" and "Defender of the Faith". 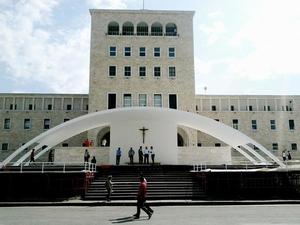 In the aftermath of the Second World War, Hoxha's communist regime did not just add a yellow star to the heads of this eagle of the thousand meanings. In 1967, it banned all religions from the country. Before state atheism, Albania was composed of 70% Muslims, 20% Orthodox Christians, and 10% Catholics. Today, according to the highly contested 2011 census, 57% of Albanians declare themselves Muslim, 2% Bektashi, 10% Catholic, 7% Orthodox, and 0.1% Evangelical Christian, while only 2.5% identify as atheists. Despite this fragmented scenario, today's Albania features no obvious religious conflicts; even so, the fact remains that, as happens in other areas of the intricate Balkan puzzle, also in Albania – and especially for ethnic Albanians who live outside the boundaries of the Albanian state – religious affiliation is doubly tied to the identity question and has, therefore, also a political dimension.

Nation and religion in Albania

As explained by Morozzo della Rocca in Nation and Religion in Albania, in politically fluid contexts religions can contribute both to undermine and preserve national identity. For example, if it is true that the orthodoxy of southern Albania has always been used by the Greeks to justify their claims on the "northern Epirus", it is equally undeniable that the Islamic religion has instead allowed Albanians to preserve their national identity, "when - says Morozzo - few other elements would have allowed them to differentiate themselves from the Serbs or Bulgarians in such a way as to avoid assimilation".

This complex mechanism of identity-building by religious antithesis is even more apparent in the events of 20th century Kosovo, where the banners of Islam have always flown in an anti-Serbian perspective and in defence of Albanian national identity, even in the years when the "motherland" was presented as the world's first "atheo-cracy". A very similar dynamic now involves Albanian minorities in Macedonia, the more Muslim the more threatened.

As authoritative historians have pointed out, the relationship with the Turks (and therefore with Islam) is one of the most controversial points of interpretation of Albania's history. Through the mythical figure of Skanderbeg, Hoxha's nationalist communism elaborated the image of a nation that never backs down, capable of countering the Ottoman power for five centuries. On the other hand the Serbs, historical enemies of the Albanian nation, described the Albanians conversion to Islam as a "betrayal" - a people surrendered, in arms on the side of the Turks, at the sole expense of the Slavic Christians of the Balkans. Both of these readings are obviously ideological, and highlight as much more sensible and consistent with historical reality the position of modern Turkey, which aims to enhance the long centuries of cooperation and exchange, including on religious grounds. Those who are not convinced of the quality of Turkish schools and institutions in Albania can always turn on the Albanian TV and see how Erdogan's neo-Ottomanism also passes through soap operas, less and less often Italian.

The reasons for the visit

It is therefore a complex country that Pope Francis chose for his first European trip - a choice with a meaning not to be sought in intricate geo-religious conspiracy theories on the containment of Islam in the Balkans, but clearly emerging from the Pope's words, certainly more universal.

Francis' highly anticipated sermon rotated around three points, which match the three reasons for his interest in the Albanian case: the Pope recalled the heroic martyrdom of the Catholics and the sufferings of the Orthodox and Muslims (always mentioned in that order) during the persecutions of the communist regime and highlighted the "spirit of communion" between the revived Albanian religious communities, "an example for Europe" and an antidote to any extremist drift. Finally, he emphasized the role of youth in building a different future, based on love, freedom, justice and peace.

"I came to thank you for your testimony and to encourage you to grow hope within you and around you... I came to encourage the younger generation, this is a young people, and where there is youth there is hope. Do as your eagle does – it flies high, but never forgets the nest..."

The aim of the visit was not to consecrate from a Christian point of view the wealth that comes from historical stratification. Instead, the Pope chose Albania as the symbolic scenery to cast a much broader message to the world: the fight against religious extremism and the reference to the "globalization of solidarity" are in fact the two passages most quoted by the foreign press.

In the Pope's flattering words, Albania becomes a land of tolerance, mutual respect, and inter-religious dialogue – a true example of peaceful coexistence able to respond to the hatred and extremism rampant in other areas of the planet. Now, notwithstanding the undoubted religious peace in the country (which many Albanians of faith attribute more to the lack of interfaith dialogue than to the ability to carry it out), it is in any case clear that Francis' narrative of today's Albania is in a way instrumental to a more general message that transcends Albanian reality – more of a pretext than the object of the Pope's reflection and visit. 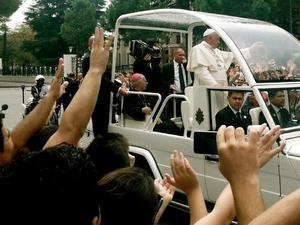 Although in the name of a very high religious message of peace, however, Albanian reality came out - once again - simplified. It is no coincidence that, from the Albanian point of view, the strongest message was the one most grounded in today's local reality. When the Pope turned again to the young citizens of new capitalist Albania, chanting three times a decided "no to the idolatry of money and false individualist freedom", the roar that followed appeared to come from those who recognized their sins more than their virtue.

Saturday in the village

Beyond the religious and spiritual content, another earthly, collective aspect deserves consideration. On the eve of Pope's Francis visit, Tirana resembled Leopardi's "Saturday in the village". As the famous poem goes, the day before the celebration, the day of preparation, "is the best of the seven days".

Two committees, one for the government and one for the church, presided with enthusiasm to the frantic work for the reception, which proved impeccable despite the limited time and the "terrorism threat" raised by several voices in the light of the difficult international situation – over 2,500 Albanian policemen were employed to ensure maximum safety. In the days before the Pope's visit, thanks to the coordinated work of hundreds of people, Tirana changed in record time under the incredulous eyes of its inhabitants: clean streets, renovated squares, blocked traffic, to the point that in bars and on social networks the ironic question circulated: "Shall we invite the Pope every week?".

But if preparations are followed by the party, the party is followed by normality – which is the biggest challenge for Albania's future. Building on the success cashed in on Facebook, premier Rama included even the adverse weather conditions in his enthusiasm: "Rain, sun, sea of hopes and emotions... and a Holy Father with the impact of a rock star on the boulevard of Tirana... the world saw a different Albania". In fact, there is every reason to celebrate, and it is not just about the international image win. Also thanks to Albania's hospitality, matter outweighed form in this trip. However, for the future of this small country of great symbolic value, the hope is twofold: for guests to see and get to know everyday Albania, and for Albanians to enjoy a different Albania – not just the Saturday before the arrival of a rock star.