Pope Francis I: a view from Armenia 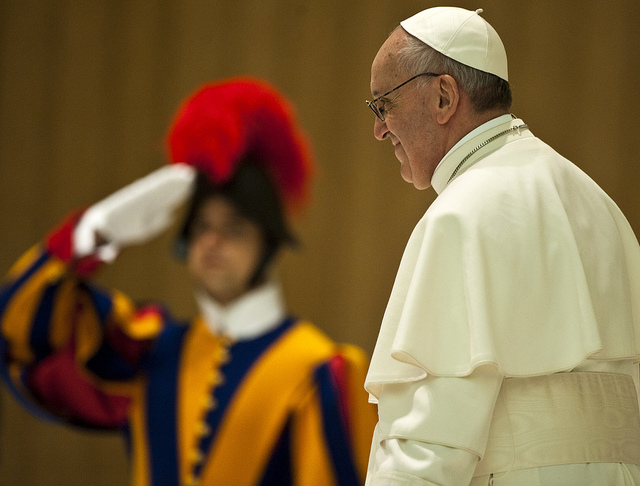 Armenians have followed closely the election of the new Pope, debating its possible consequences in the process of international recognition of the Genocide. In social networks, however, the event became an opportunity to discuss the role of the Church in modern society

On March 31st, Armenians all over the world celebrated Easter. This includes not only the majority of Armenians, who, as it is well known, belong to the Armenian Apostolic Church, but also the less numerous Roman Catholics in the country. A month earlier Armenians of all denominations closely followed what was happening in Rome, as the cardinals were choosing the new Pope.

The abdication of Benedict XVI, and the election of Francis I, became an occasion for the Armenian public to discuss the role of the Church in contemporary society, a matter which recently has become subject of heated debates in Armenia.

The issues at stake are not so different from those debated in other countries: what should be the role of the Church in the Armenian society, how far should the separation of Church and State go, is the Armenian Apostolic Church doing enough to adapt to the changing realities of the 21st century.

Roman Catholics in Armenia are the ones who followed the election of the new Pope more closely. The community, though small in numbers, has played an important role in Armenian history. The emergence of the Roman Catholic community is a result of the contacts between Armenians and Western Europeans at the time of the Crusades. Here is why Roman Catholics were historically referred to as “Franks” by other Armenians, a term used in the Middle Ages to refer to all Western Europeans.

Today there are Roman Catholic communities in Northern Armenia, as well as in Javakhq (Javakheti), the Armenian populated region of neighboring Georgia. This was the region where the most prominent Armenian in the history of the Roman Catholic Church, cardinal Grégoire-Pierre Agagianian , was born, a cleric close to becoming the new Pope in 1958.

The Armenian television broadcasted live from Rome the election of Pope Francis I, and the topic was widely discussed in social networks, even though this event took place immediately after the disputed presidential election in Armenia. Some Facebook users even jokingly compared the two events, using the opportunity to express their skepticism on the official outcomes of the presidential election, where incumbent Serzh Sargsyan was declared the winner. Thus, a joke circulated in Armenian social networks, saying that if the Armenian Central Election Committee had counted also the votes of cardinals, Serzh Sargsyan would have been declared the new Pope of Rome.

On a more serious note, however, some Armenians expressed hopes that Jorge Mario Bergoglio, who, before becoming Francis I, was the archbishop of Buenos Aires, could play a role in the process of international recognition of the Armenian Genocide. This hope is based on the fact that Bergoglio has had close contacts with the influential Armenian community in Argentina, and has in the past spoken about the Genocide condemning it strongly.

The historian of religions Hovhannes Hovhannisyan, however, believes that these expectations are exaggerated. After all, he says, there is not much that the Pope could do in this respect, more than restating once again recognition and condemnation of the “Eghern” (the Armenian name for Genocide), which has already been done by John Paul II.

Many Armenians were impressed by the ascetic lifestyle of the new Pope, and by his down-to-earth approach to the believers. The new Pope’s active position regarding social issues was contrasted to the reluctance of Armenian Church hierarchs to state a moral position regarding issues that today haunt the Armenian society, such as poverty and corruption. Today, some of Armenian Apostolic Church hierarchs are increasingly criticized for leading a lavish life-style. Thus, several years ago many Armenians were disturbed by the media reports that one of the Church hierarchs admitted to having received an expensive Bentley car as a present from one of his godsons: this was considered extremely inappropriate at a time when many Armenians live in extreme poverty.

As another expression of this mood, recently a YouTube interview with a well-known Armenian historian of architecture, Samvel Karapetyan, went viral among Armenian social network users. The historian accused some of Armenian Church hierarchs of not doing enough to preserve the ancient monuments of Armenian Church architecture. Many of these are today in extremely poor condition, while the Church is spending millions on building new churches.

At the same time, many social network users also pointed out to the fact that the Roman Catholic Church today is going through extremely difficult times, as a result of numerous scandals, while the problems of the Armenian Church, though quite numerous, are not nearly as difficult as the ones that the new Pope will have to address.

In any case, Hovannisyan says, the Armenian Church could learn a lot from the new Pope, who is known for his ascetic lifestyle and his attention to the plight of the poor and deprived. This can serve as an example for some of Armenian Church hierarchs who need to fight the recently emerged trends towards lavish life-style and focus on serving the community, spreading the message of the Church and helping Armenians in the Diaspora to preserve their identity and culture.

A growing number of believers

Unlike most Western European countries, the number of practicing believers in Armenia is growing, as well as the significance of religion in the life of society. This is part of a trend common to many Eastern European countries, where the fall of atheist Socialist regimes was followed by a return to spirituality and religion. In Armenia, however, this trend is strengthened by the importance that Christianity has historically played in the life of the country.

Armenians take immense pride in having been the first nation to officially accept Christianity as State religion (in 301, according to the tradition). Since then, during hard times, the Armenian Church often remained the only institution to unite most Armenians, whether in the homeland or in the Diaspora communities. The 1915 Genocide in Ottoman Turkey, and decades of totalitarian regime in Soviet Armenia, have taken their toll on the Armenian Church. However, today the Armenian Apostolic Church is arguably the most influential non-State institution in Armenia. It also enjoys close relations with the government, even though Armenia is a secular state, as proclaimed by its constitution.

According to Ara Galoyan, an Armenian expert on religions, the Armenian Apostolic Church, as one of the oldest Churches, enjoys enormous respect in the Vatican and is very active in the Ecumenical movement. Moreover, in his opinion, since the Armenian Apostolic Church has a close relationship with the Russian Orthodox Church, it may play an important role, helping to establish contacts and solve issues that divide Moscow from Rome. According to Galoyan, while it is well-known that the Popes and the Russian Orthodox Patriarchs have been avoiding a public encounter and therefore prefer not to visit the same place at the same time, the closest they have ever come to meeting each other was in Armenia in 2001, during the celebration of 1700 years since the adoption of Christianity, when they missed each other only for a matter of hours.