Europride in Serbia: success and defeat 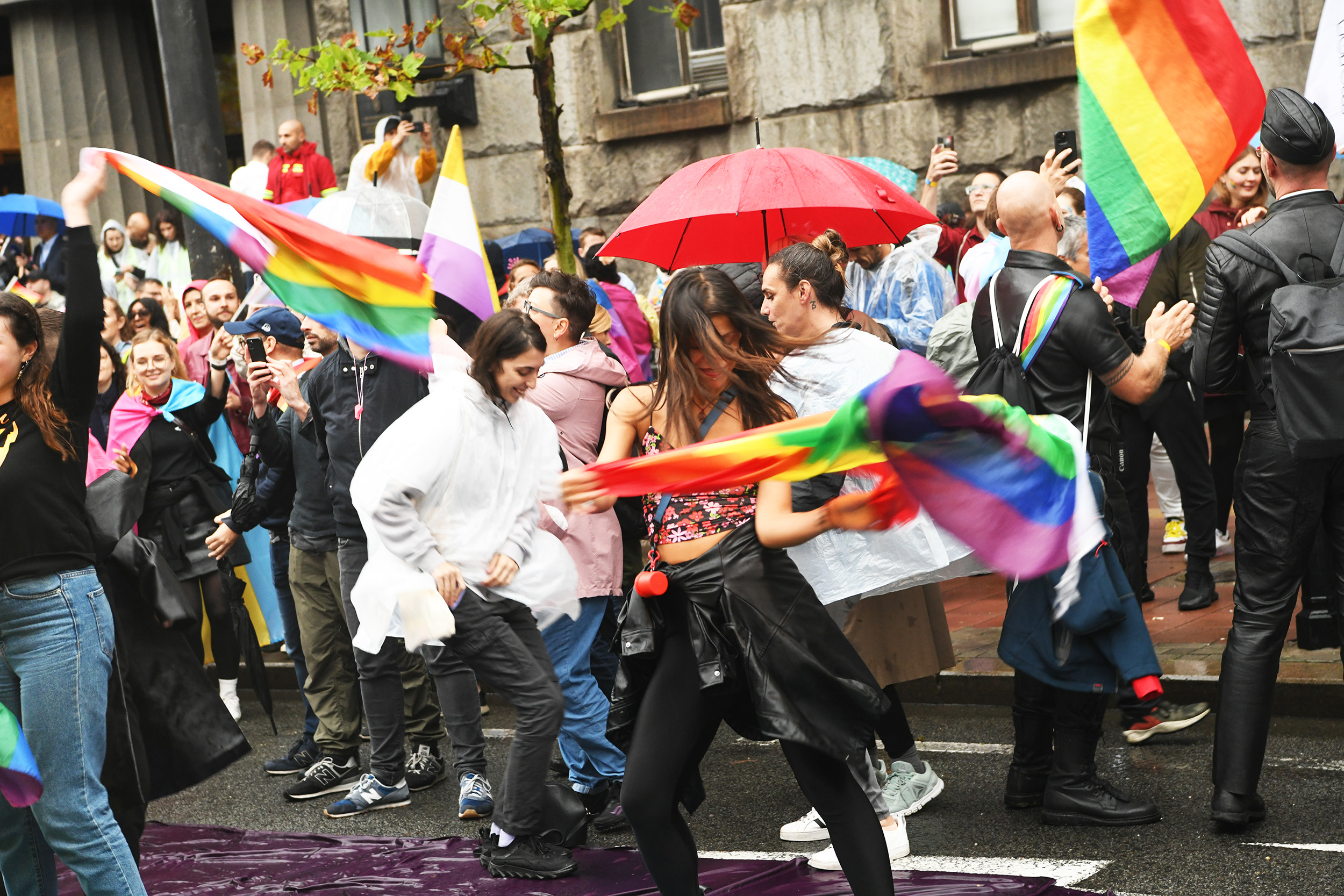 Prohibitions and threats failed to stop Belgrade's Europride and its colourful parade through the streets of the capital. However, there were also accidents, hate speech, and violence. The road to full realisation of LGBT rights in Serbia remains an uphill one

Days after the conclusion of the main Europride  demonstration in Belgrade, which culminated in the Pride Parade held on Saturday 17 September, the organisers can claim success and the authorities can claim they managed to ensure the safety of participants in the march, including European Commissioner for Equality Helena Dalli, some MEPs, and foreign ambassadors in Belgrade.

Some groups of hooligans and opponents of the event tried to reach the places touched by the LGBT march, causing accidents and clashing with the police. Serbian Prime Minister Ana Brnabic said that 5,200 police officers ensured the safety of the parade, during which 63 people were detained, while 13 police officers were injured. The Europride organisers denounced the fact that, at the end of the event, some participants in the march were attacked. According to media reports, these are activists from Albania and Germany.

Over one hundred events were organised as part of the Europride Week, held from 12 to 18 September. Of all the planned demonstrations, the pride parade raised the greatest concerns with respect to safety. A few days before the date set for the march, the police banned the event, thus heeding the words of Serbian president Aleksandar Vucic . A few weeks ago, Vucic had declared that the Europride and the final parade would not be held because the government – which has been in office for six months now, with a technical mandate pending the formation of the new one – had decided so.

A decision motivated by concerns about the risks that Pride would entail, considering the strong discontent and protests of a part of public opinion opposed to the event. Members of the LGBT community and their supporters reacted to the announced ban by invoking the Constitution and freedom of assembly.

Although the Belgrade Administrative Court rejected the appeal presented by the organisers against the police decision to ban the march, on Saturday 17 September several thousand people marched, under pouring rain, along a modified and shorter route than originally planned, crossing the park of Tasmajdan to reach the homonymous stadium where the final concert took place. At the end of the event, Interior Minister Aleksandar Vulin stated  that his ministry did not authorise the march, but simply made sure that "all participants in this demonstration were escorted to the concert in complete safety".

The weeks preceding the Pride were characterised by a fiery climate, continually fuelled by some right-wing groups, but also by the statements of some members of the opposition. For example Bosko Obradovic, leader of the Dveri movement, threatened to take 100,000 people to the streets to protest against the LGBT march, while Vuk Jeremic, leader of the People's Party (NS), declared that allowing the Pride to take place would be risky due to the monkeypox epidemic. However, the Serbian Orthodox Church played a particularly important role in stoking tensions.

The first to fire was Metropolitan Nikanor, who literally cursed  the organisers of the Pride and then said: "If I had a weapon, I would use it, but I don't have any". He particularly lashed out at Prime Minister Ana Brnabic – admittedly homosexual and of Croatian origin – because "she does not profess our religion, nor does she belong to our people", defining the Prime Minister's parents and grandparents "our enemies, torturers of the Serbian people".

The patriarch of the Serbian Orthodox Church Porfirije, instead of condemning the words of Metropolitan Nikanor, rushed to support the ban on Pride. On 11 September, during a rally organised by some right-wing groups with the support of the Serbian Orthodox Church, the patriarch, after reciting a prayer, said  that the Orthodox Church is against any LGBT+ ideology while claiming opposition to "any form of violence, stigmatisation, and public persecution", then adding that "evil cannot be repaired or defeated by resorting to violence, which does nothing but provoke further spread of evil". The following day on the official website of the Serbian Orthodox Church an appeal  was made by the patriarch to the priests to recite during each liturgical ceremony a "prayer in defence of the sacredness of marriage and the family". The prayer also mentions an ideology imposed from the outside aimed at destroying the foundations of identity and the pillars of the individual and the community. The patriarch also called on the competent authorities to ban all textbooks that "promote gender ideology".

Such interference by the Church in the life of a secular state like Serbia has done nothing but exacerbate the internal conflicts in society, further fostering that part of the conservative public opinion that has a strongly negative attitude towards the LGBT community, even if it does not know anything about it. It has not gone unnoticed that the opposing groups have received the support of various actors in the international community. While many European politicians and the US ambassador to Belgrade joined members of the LGBT community, parading at last Saturday's Pride, attendees of right-wing rallies waved banners depicting Vladimir Putin.

A restricted freedom within the boundaries of police cordons

The controversy surrounding the Pride was artificially created by the government to divert attention from various topical issues, including the implementation since last September 1 of an agreement on identity documents between Serbia and Kosovo that has aroused significant tension between the two countries in the last few months.

The controversy orchestrated by the government has also overshadowed the requests made for years by the LGBT community and by civil society organisations engaged in the defence of LGBT rights.

Last year the Ministry of Human Rights and Minorities presented a bill on same-sex unions, but after the intervention of President Vucic, who declared that he would never sign such a law, the proposal has fallen into oblivion. Ten years ago some changes were introduced to the Serbian Penal Code, providing for an aggravating circumstance for hate crimes based on sex, sexual orientation, and gender identity. To this day, it is still unknown whether anyone has ever been convicted of such crimes. In recent days, no one has even said a word on the implementation of the law against discrimination against the LGBT population, approved in 2009.

Serbian citizens remember well the first Belgrade Pride, held in 2002, when the participants were brutally beaten while the police stood on the sidelines, without even trying to stop the violence. During Pride 2010, over 150 people were injured in clashes caused by some hooligan groups and the far right. LGBT parades in recent years have been characterised by less severe clashes, but also by the feeling that people parading along a path bordered by massive police lines did not enjoy effective freedom of movement and that their problems were still largely ignored by public opinion. Also this year the blatant manifestations of hatred towards LGBT people, which went unpunished, the protests against the LGBT community, and the tendency to invoke not only patriarchal and family values, but also violence provided a desolating image of Serbia.

According to data published by the organisation Da se zna  [To be known], 83 physical and verbal attacks against LGBT people were recorded in 2021, marking an increase of 37% compared to 2020. This is the highest number of incidents ever recorded within a year since 2017, when the organisation started monitoring the situation. Of particular concern – as stressed by the representatives of the organisation – is the fact that "68 incidents, or 82%, were not reported to the competent authorities, above all due to mistrust in the institutions".

When Ana Brnabic was appointed in 2017, the international media had spoken of her not only as the first woman to lead the Serbian government, but also as the first openly homosexual Prime Minister. The LGBT community and a part of Serbian public opinion expected Ana Brnabic with her actions and her way of leading the government to contribute to the improvement of the position of LGBT people, but also of other marginalised groups. These expectations have remained unfulfilled and during a meeting organised as part of the Europride Brnabic was greeted with boos . Neither she nor other senior state officials attended the Pride last Saturday.

At the end of Europride Week, Ana Brnabic declared that Serbia has shown itself to be a serious country that respects the rights of all its citizens. “We have finally closed this issue, putting an end to the question. Now we will tackle more serious problems and more important issues", said the Prime Minister, expressing with utmost clarity the attitude of the Serbian state towards LGBT people.