The Bull, the Beggar, and the Bimbo 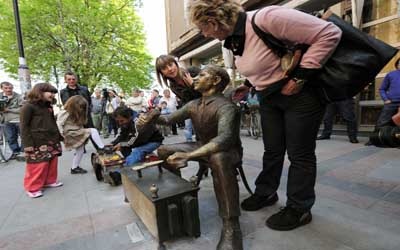 The Bull, the Beggar, the Bimbo....These are only some of the sculptures the Macedonian government has been installing in the centre of Skopje as part of its recently launched architectural renewal spree.The process has not left anyone dispassionate, stirring political controversy over the city's urbanistic development

The bull, the beggar, the bimbo, the shoe cleaner, the guy named "Hey" waving his hand to the bimbo across the street...these are only some of the sculptures the Macedonian government has been installing in the centre of Skopje as part of its recently launched architectural renewal spree. The VMRO government of Prime Minister Nikola Gruevski has decided to give a serious facelift to the centre of Skopje.

The bull, installed about a week ago, fascinates passersby with its muscle and mean resolve. Children seem especially amused as they climb on him. The bimbo, just across the street from the bull, has been entertaining the public for over a month now and it seems to already have become, well, a symbol of Skopje. The young, gorgeous girl, portrayed as a fashion victim who speaks on her cell phone has become an attraction. She is constantly surrounded by curious spectators who want to have their photo taken with her. Some fifty meters down the street from the bimbo in direction of the central square stands the older monument of Mother Theresa. The construction of her memorial house, just next to her statue, has only been completed several months ago. Until recently, Mother Theresa was alone on the central "Macedonia" street. Now, suddenly, she has plenty of company. Alas, everybody wants to be photographed with the bimbo.

The recent sculpture-phoria is, however, only the beginning in the government's grand cultural project. The main thing is yet to come. Skopje has been awaiting the arrival of Alexander the Great on his horse Bucephalus, which should be placed on Macedonia Square in the city's very centre. The monument, first announced as 30 meters tall, and subsequently "reduced" to anywhere between 12 and 17 meters, is being constructed in a location unknown to the press - according to some rumours in Florence - and has already caused serious political tremor in the country. "He" was a hot issue in the recent elections. The opposition denounced it as part of the government's overt agenda of "antiquisation" and "de-Slavisation" of Macedonian national identity. Another argument says it is a deliberate strategy to spite the Greek neighbours. However, Alexander will not ride in alone. He will be accompanied by a dozen other big, bulky historic figures from antiquity through Ottoman times to more recent history who will find their place in the town centre.

The process has not left anyone dispassionate. The issue of sculptures in the centre regularly make headlines and occupy editorial pages. Many resent them but many others actually appreciate them. The recent local vote in Skopje can be seen as a sort of a referendum on the issue. The Centar Municipality - the City of Skopje metropolitan area has 10 municipalities - has the mandate to decide on locating such sculptures. The opposition candidates, both for the Centar Municipality and the City of Skopje, opposed the "arrival of Alexander" during the election campaign. Had they won, they would have had the power to oppose the central government, which is pushing the project through the ministry of culture. However, they both lost by convincing margins. This can be taken as a relevant indicator of how voters feel about the project.

Yet, the sculptures are only part of the larger picture of the aesthetic (and obviously political) urban renaissance of Skopje's centre. The government has recently announced several major infrastructure projects in addition to the ones initiated after 2006 when the VMRO-led coalition came to power. They include a restoration of the old Officerski Dom (officer's house) on Macedonia Square's edge next to the river, a landmark building destroyed in the 1963 earthquake; also new buildings are planned for the national philharmonic orchestra, the constitutional court, the national archive, the theatres, and many more. Actually, the projects are so many it seems difficult to keep track.

This should essentially be good news. The construction boom in Skopje over the last years has been primarily private initiatives. It is probably not bad that the government has decided to invest, even if it is in times of major economic crisis, in the remake of the capital. Many citizens in Skopje have long been eager for cultural renewal. Macedonia is much less indebted compared to its neighbours. External debt stands at around 20% of GDP; while in Croatia and Serbia, it is closer to 90%. The government's logic is to increase the debt but to employ domestic industries and thus counter the still unfolding crisis. Building these facilities is actually a smaller part of the government's agenda of serious capital investment in roads, railroads, and power plants.

Some of the renaissance will definitely have a political colour. At the launch of the project for the constitutional court's new grand building and the national archive across the river from Macedonia Square, the architect who designed the structure said that it would be similar to how things were built in "Macedonia's imperial period".

The other issue, which in addition to the monument of Alexander, has been most politicised, had involved the construction of a church at Macedonia square. A church on the square was destroyed in the 1963 earthquake. After the VMRO party came to power in 2006, Prime Minister Nikola Gruevski vowed to restore it.

The project encountered opposition. First, the now-former mayor of Skopje, Trifun Kostovski, fought the project, on urban planning grounds, all the way to the constitutional court and lost. Recently, a group of citizens filed another petition before the constitutional court contending that building a church with taxpayers' money violates the constitutionally guaranteed secularism, and that it favours one religious community - the Christian one, over others. A few weeks ago, students from the faculty of architecture held protests against the project to build the church; they said they did not oppose the construction of a church but opposed its location, which, in their view, would only stifle the central square's energy. Their protests were interrupted by a group of apparently well-organized counter protesters, who said they wanted a church. While the pro-church group was beating the students, the police seemed to react rather mildly. The government accused the opposition of having manipulated the students; the opposition accused the government of having organized the counter-protestors and kept the police from doing their job.

The opposition to the church did not end there. Whereas the students of architecture opposed the project on architectural grounds, and other citizens opposed because of secular reasons, a third type of reaction came from groups close to the Islamic community in the country. They did not oppose the church directly but the construction of other buildings on land that had belonged to the Islamic community. In their words, if the Christians were getting a church, they also wanted something.

Further protests and disagreements can be expected as these cultural projects unfold. Alexander still has not arrived on his horse. That ought to be a major spectacle. The local vote, nevertheless, indicated that the government has the support of Skopje residents for these actions.

As for the opponents, it is yet to be seen whether the opposition of today will actually decide to "unmake" some of these projects when they eventually return to power. They surely would not be able to displace a church or other buildings. They could perhaps decide to unseat "Al", but that is, for the time being, a distant prospect. The next national vote is three years away. When that happens, it would be another funny episode in the puberty of a fledgling democracy. Commentators say it would be much more difficult to bring him down than put him up, in every sense of the word.