Slow food. On grass and transhumance in Western Macedonia 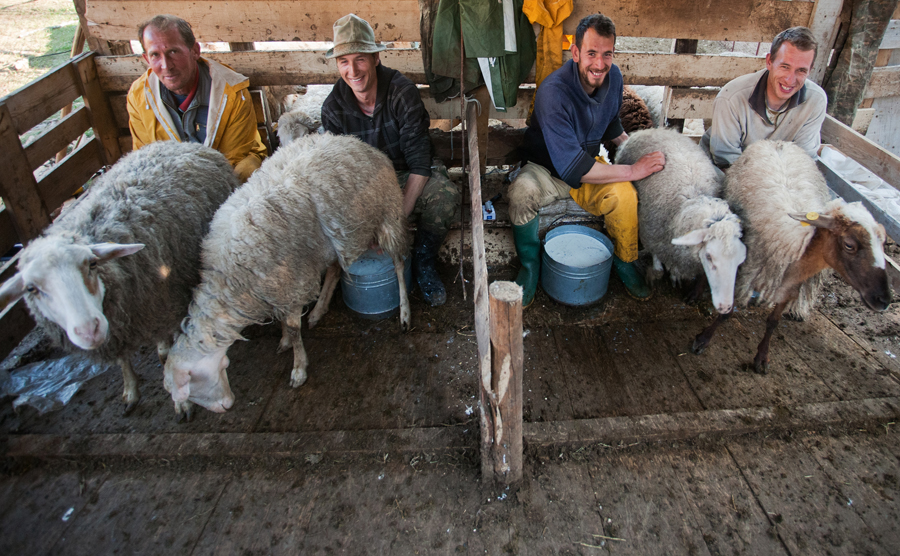 Mavrovo, Western Macedonia. On these mountains, the Balkans’ continental and Mediterranean climates meet, giving birth to incredibly rich and unique pastures. This is why, throughout the centuries, this region has specialised in transhumance sheep breeding and cheese production. A slow food presidium that will make its first international appearance today at the Cheese fair in Bra, Cuneo, Italy.

While talking, Tefik Tefikovski cannot stand still, not even for a minute. He strolls, gathering scents and herbs on the mount side towering above

the village of Jance and the sinuous course of the Radika river, in the green heart of the Mavrovo National Park, in Western Macedonia. He is going to need the herbs to prepare teas and infusions or to enrich the guests’ plates at his hotel-restaurant, well known in the whole region.

Born in Alexandria of Egypt, where his family had emigrated in distant times, he himself an emigrant for twenty years, first to Germany and then Italy, an “avant-garde” construction entrepreneur in eco-friendly materials, he was among the first in Italy to propose using unfired clay in plaster and trimmings. He is now a restaurateur because it is his vocation.

Founder, and today President of the Slow Food Sarplaninska Convivium, in his own way Tefik is the living symbol of the richness and complexity of this strip of uncontaminated green land: a real concentrate of good will and a slow philosophy. These become concrete, here, in the ancient practice of moabet, the art of discussing with slow rhythms, no haste, in front of a glass of rakija, grape or fruit grappa and a dish of meze, a cold entrée of lunchmeat and cheeses.

An unequalled naturalistic, cultural and ethnic richness. On the mountains, Macedonians, Albanians, Turks and Torbeshi (like Tefik) coexist: Macedonian Slavs converted to Islam during the Ottoman Empire.

Here, everything is brushing against each other, touching each other with the hands, getting to know each other. “On the Mavrovo Mountains, you find the Balkans’ continental climate and the Mediterranean climate”, Tefik explains while taking us on a tour of the park. “This creates the perfect conditions for an endless variety of herbs and plants, which make the pastures a triumph of scents and biologic diversity”.

It is easy to understand why, throughout the centuries, this area has specialized in transhumance sheep breeding and become well known in the Balkans, especially for its “sarplaninski ovci kashkaval”, a spun paste seasoned cheese, produced in the summer, when sheep pasture at heights between 1000 and  1500 meters.

Cheeses like the “kashkaval” are spread in the whole of the Balkans. The one from the mounts of Macedonia is named after the area’s most stately mountain massif, the “Sar Planina”, on the border with Kosovo and Albania. There are, though, high pastures also on the wooded sides of the Korab, Bistra and Deshat mountains.

“In ancient times, the flocks of the rich yeomen were huge”, a smiley Ramadan Camilovski tells us, while he milks a flock of a few hundred cows, with his two brothers, on the Lazaropole plane. “When, in spring the first sheep would get here, after spending the winter in Thessaloniki, the last ones still had to begin their journey”.

Story written for the Italian slow food magazine. The Mavrovo cheese a protagonist of the Cheese fair in Bra, Cuneo, Italy

In Macedonia, despite the difficulties, there is who, in the past years, has been working towards sustainable tourism. From the peace of the Orthodox monastries, to the clamour of the ancient bazaar in the capital, Skopje. All this with a new awareness about protecting the environment, enhancing local produce and looking after the urban heritage. Among the active players in these fields are some Italian local authorities that, thanks to the SeeNet II Programme, are promoting relations and exchanges with the whole Western Balkan region.

Together with Galicnik, Lazaropole has, for centuries, been the heart of kashkaval production. “Until after the war, there were about 100.000 heads of cattle”, says one of the elderly in the village, now only inhabited in the summer. “The sale of kashkaval reached the American market and, at the times of Yugoslavia, it was the first source of valuable currency here in Macedonia”.

Today, however, this tradition is at risk, and the heads in the park barely exceed 10.000. A variety of factors is jeopardizing the transhumance sheep farming, and with it the production of kashkaval and other typical cheeses (“belo sirenje”, similar to feta and “kiselo mleko”, a variety of compacted and dense yogurt).

First and foremost, depopulation of the mountains: in the last few decades, emigration rates have been very high, especially to Central-Northern Italy. Also, the lack of support policies for traditional production and the unfair competition from industrial production of cheeses, carrying noticeably lower prices.

The only path that can be pursued to safeguard traditional products and the enormous cultural heritage and the flavors connected to it, is collaboration among producers. These, however, are too small and isolated, at the moment, to be able to coordinate and carry on an efficient action plan.

This is why the initiative that led to the creation of the Slow Food Sarplaninska Convivium, founded in 2009 and which gathered the most aware resources in the area of the Mavrovo park, takes on a fundamental meaning.

One of the key figures in the birth of the Convivium is Nikolce Nikolovski, a dairy technician and a passionate scholar of the area’s ancient production techniques, which have gone unchanged for centuries.

“It is difficult to gather those who, like shepherds, are poor and live isolated, and then have them collaborate”, Nikolce explains. “In 2010, during the Terra Madre Day, the Convivium set up a public debate. It was the first time, for small producers especially, to make their voices heard”.

At the moment, around 10 producers are involved with the activities of the Convivium. Notwithstanding the many difficulties, the first steps are being taken towards a coordinated action, and also towards local authorities. At the top of the agenda, the creation of a “territorial branding”, to make the connection of the Mavrovo dairy products to the land recognizable and visible.

In the meantime, foundations have been laid for safeguarding Mavrovo malga traditional cheese (kashkaval, sirenje and kiselo mleko): these foundations will be laid out for the first time at “Cheese 2011”, next September in Bra. It will be a unique opportunity to have a vast public know the potential of flavor and cultural tradition, jealously preserved throughout the centuries by the peoples of Western Macedonia.

Among the initiatives that are being carried out is the creation of the first ‘Macedonian Cheese Street’, a path that is able to promote, at the same time, the unique flavors and landscapes of the Mavrovo National Park.

“The streets our politicians spout are made of bridges, tarmac, cement. All of them repeat “infrastructures” as if it were a magic word. The only infrastructure we really need, though, is knowledge”, states Tefik with conviction. “If we manage not to lose the road to knowledge, inherited from our Fathers, a knowledge made of simple and true things, like our cheese, I am sure we will get very far”.