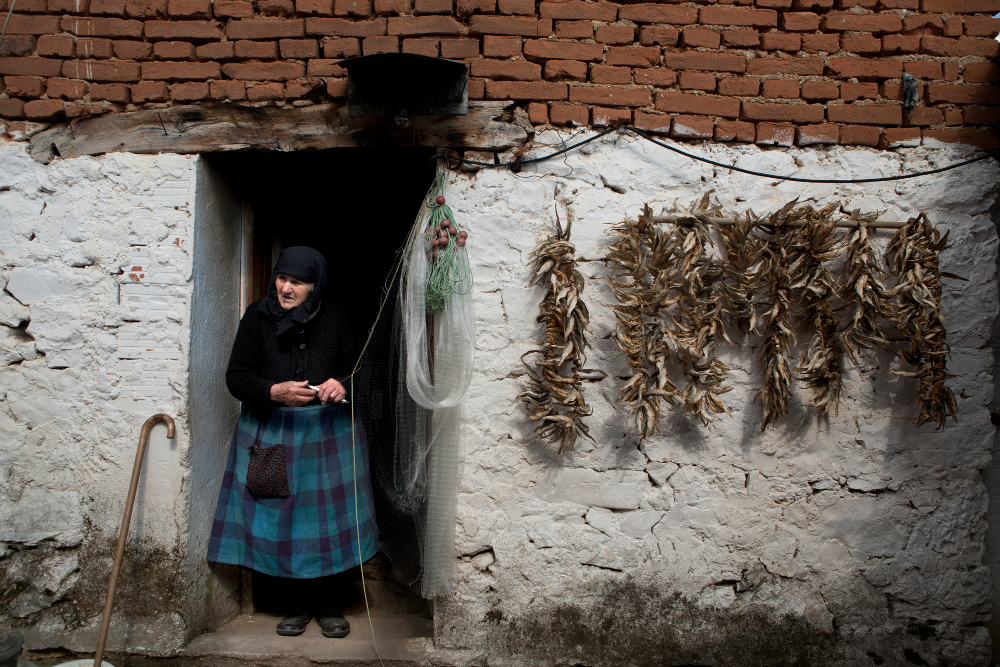 Lake Prespa, on the border between Macedonia, Albania and Greece preserves unique biodiversity and culinary traditions. Like that of the dried fish "cironki", whose origins are lost in time

Vanco Vasilevski, or rather "Koki", as everyone calls him in town, is the fisherman you might just expect. Warm, deep hazel eyes moving sly under the red cap, pulled down over his ears. Only occasionally, when he tells of life and fatigue on the water, do they suddenly light up and brighten his face, carved by endless days of wind, lake, and sun.

For almost fifty years, since he was a child or a little more, "Koki" has been throwing the nets and a piece of his heart in the Lake of Prespa, a mysterious, little known lake in the heart of the Balkan Peninsula, now crossed by the borders dividing Macedonia, Albania, and Greece.

As he speaks, "Koki" barely moves the corners of his fleshy mouth, hidden under shorts drooping mustache, an eternally lit cigarette hanging. We sit down to talk in his cellar room: the fisherman's strong, wrinkled hands turn the slender, silvery silhouettes of little dried fish on the economic stove one by one, while the cellar fills with a strong smell, sour and fragrant. 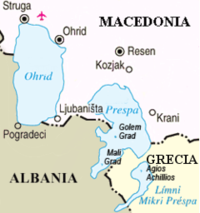 Prespa Lakes are divided between Albania, Greece, and Macedonia

"Fishing is tough business, but ours is a generous lake. Here you can catch the 'mrena' (Prespa barbel), the eel, the nose, the trout, the 'som' (Wels catfish). And then, of course, the 'belvica', which is something special, especially here in Stenje, that – along with Konjsko – has always been famous for the production of 'cironki'".

The tradition of "cironki", tells "Koki" while cooking the fish on the red-hot stove, is so ancient here to get lost in time. The "belvica" is fished from late spring, when it approaches the shore to lay its eggs, until late autumn. "Today we use low and long nets, that we throw in the lake in the evening and pick up the next morning", says "Koki" while collecting the seared fish in a big bowl filled to the brim of boiling water.

"Once, however, we used the 'Pezol', a circular net with pearly balls of lead, which was then banned, as it was too much impacting on fish, especially in the breeding season. With 'Pezol', if you had trained hands and eyes, you could catch a ton of 'belvica' a day. For real", he concludes with a vague look that cannot hide a hint of nostalgia.

Meanwhile, after being burnt (to soften them) and soaked (to remove the excess salt), the "cironki" are ready for cooking. "Koki" cleans them carefully, removing guts and scales, and lays them in a big pan, where they begin to brown in butter. Then come onions, "nane" (peppermint), and sweet chilli, which gives the dish purple reflections.

"We say that the 'belvica' was born to swim three times: the first in water, the second in butter, and the third...in wine", says "Koki, his face widening into a mischievous smile.

We go out for a walk in the countryside with Vanco Stojanovski, representative of Stenje's food communities. He also started fishing as a child, under the watchful eyes of his father, then worked for years in the tourist structures that developed since the seventies. The relationship with the lake and the tradition of "cironki", however, is still alive and strong.

We say that the 'belvica'

was born to swim three times:

the first in water,

the second in butter,

"Today, the fish stock of Lake Prespa is still vital. Many varieties, 'belvica' included, are caught in abundance, although some, such as the 'mrena', are visibly diminished", says Vanco as we walk on the sandy beach, leading from the last houses of Stenje to the shores of the lake in gentle slopes. "The question, however, is how to manage these resources. In the last seven years the situation got out of control, as the lake authority has not been able to control the volume of fishing. A new authority was appointed a few months ago, but it is still too early to see the long-term consequences".

But it is not only uncontrolled fishing to put at risk the lake and its treasures, "cironki" included. In recent years, for example, there has been a sharp increase in pollutants, especially pesticides used in the cultivation of fruit trees, planted more and more numerous on the banks of the lake. Even more worrying, however, is the drain of young people, forced to emigrate by Macedonia's difficult economy. 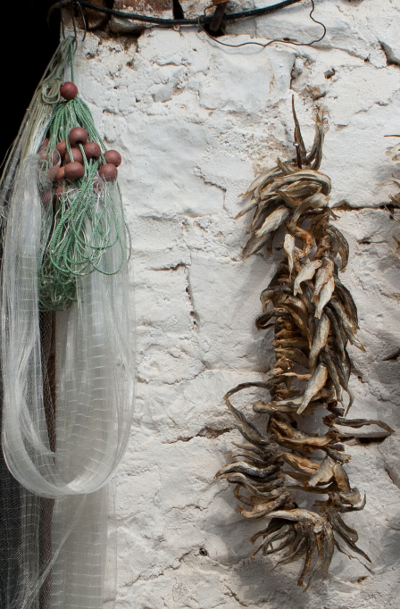 "Many fishermen's earnings do not reach 200 Euros per month. It is a miracle that in Stenje there are still dozens of people who are dedicated to the craft. To date, what partly saves the village is the presence of a small textile factory which employs the women", sums it up Vanco. "The situation is complicated, however, and many continue to emigrate, because the tourist structures inherited from Yugoslavia, unfortunately, are largely abandoned and in ruins". This is why, if today in Stenje and neighboring Konjsko there are still those who can fish and produce "cironki", in the surrounding villages of Dolno Dupeni and Ljubojno this ancient tradition has been long lost.

"Today 'cironki', as other typical products of the lake, have a good potential for development, which is essential to survive in the long run. More and more people know about them and appreciate them, and are therefore potential buyers. What is missing, however, is the formal recognition of the fishermen as small traditional producers", argues Vanco. "The lack of permits, especially from the healthcare authorities, makes direct selling an often complicated exercise".

On the beach, swept by a stiff wind, a dozen brightly colored boats are lying on the sand like large overturned tortoises. They are the "chamec", Prespa's typical fishing boats. All around, the landscape is vaguely reminiscent of a Norwegian fjord: on one side the mountains of "Baba Planina", with the Pelister's highest peak still covered in snow; on the other, the dark, bulky profile of the massif of Galicica, that separates Prespa from the most famous and popular Lake Ohrid. While not deep, Lake Prespa can be very tricky – when the gusts become more intense, fishermen rarely have the courage to put their "chamec" in water.

We return to "Koki"'s place, not far from the low, square bell tower of the church of St. Cyril and Methodius. At the door of the courtyard an elderly woman, wearing the traditional scarf tied under the neck, is sitting on a low wooden stool, all intent on mending the web of a fishing net. She is "baba" (grandmother) Sota, "Koki"'s mother. We keep her company, slowly sipping a thick Turkish coffee, with a strong smell.

"At home, I am the one who prepares the 'cironki'. Every year, for over 75 years. The procedure is not complicated, but only experience refines the results and avoid mistakes", says baba Sota, without hiding a hint of pride. "The 'belvica' must first be salted. Then the fish needs to stay seven to ten days in a wooden barrel, covered with leaves of 'loboda' [a local herb] and crushed by a weight. When they are ready, they are bound in "nisi" (crowns) of about three pounds and stretched out to dry in the sun".

Drying depends on the weather, but typically lasts from one to two weeks. The "cironki", then, are stored in a dry and shaded place, where they can be kept for one or two years.

"Here in Stenje, the 'cironki' are part of life, of tradition, it is impossible to do without", says convincedly "baba" Sota, while continuing to patiently fix the net. "Life on the lake can be tough. Even the coldest winters, however, seem shorter when the house is full of guests and a fire crackles in the fireplace. But above all, when in the cellar hang many crowns of fragrant 'cironki'.