Bosnia, Slow Food. As humble and tenacious as a vine 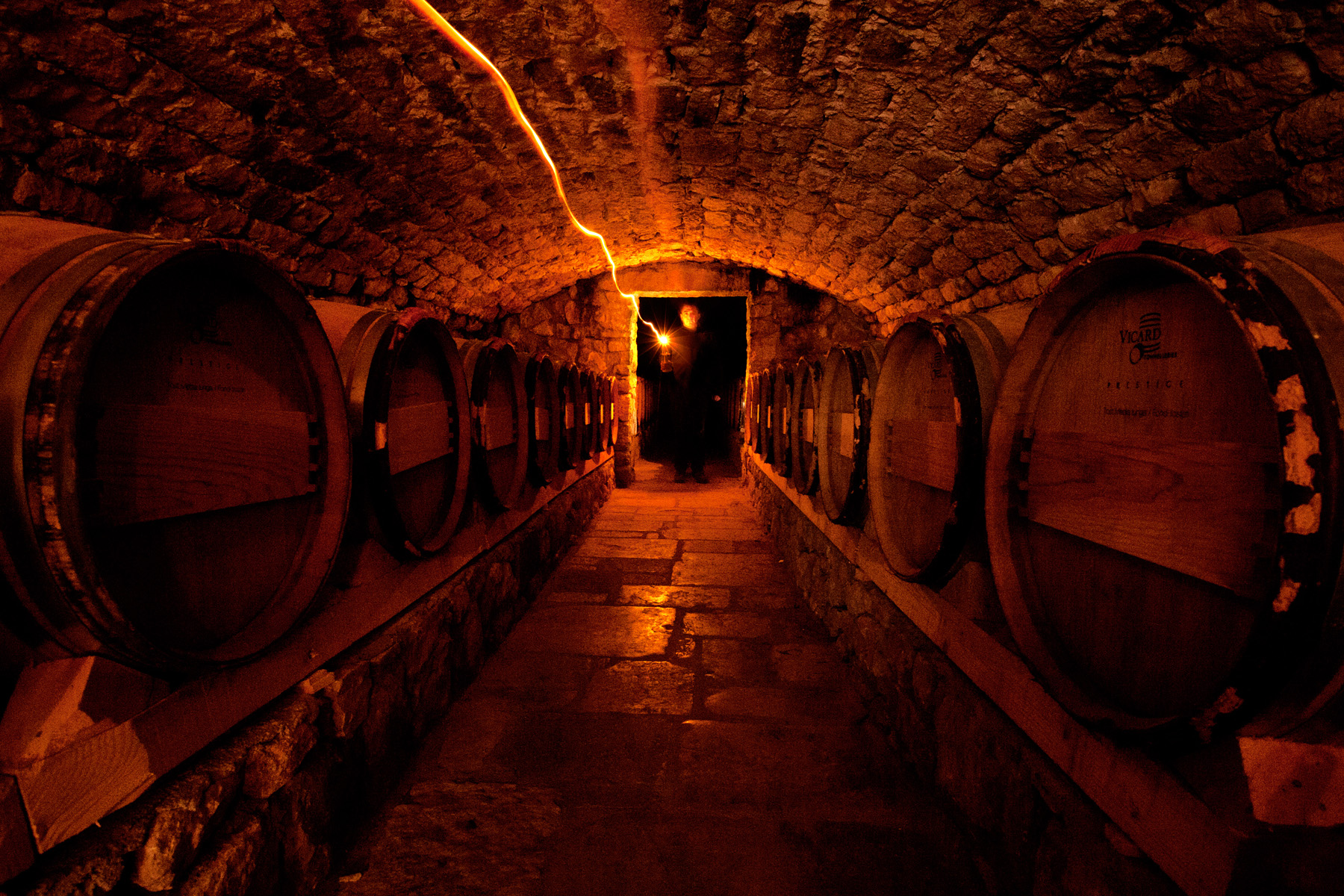 Trebinje, Bosnia-Herzegovina. Along the banks of the Trebišnjica river, in the Petrovo and Popovo Polje plains, vines grow surrounded by stony and lunar mountains. These vines give life to žilavka and vranac, two wines that have made the history and success of enology in Eastern Herzegovina. An age-old and fragile treasure of tastes, now promoted and safeguarded by the local Slow Food convivium

The night over Herzegovina is cold, silent and filled with stars. Inside Jovo Runjevać’s mutvak, a bunch of embers stoked from time to time provides warmth and a sense of ancient intimacy, drawing ever-changing shadows on the white limestone walls and the dark barrels. The mutvak (or vatrenjača) is a bare and square room. In this land of karst hills and emerald rivers, the mutvak serves two fundamental purposes.

It is used to dry and smoke hams and other sausage products, abundantly hanging from the dark ceiling, but it is first and foremost a safe shelter to get through the long and sharp winter nights in the company of friends and fellow villagers. The low but alert fire warms body and fingers numb with cold. Jovo, however, knows that a pure distillate from the stony soil, the wind and the sun of Herzegovina will warm the soul. He moves self-confident and measured, pours his žilavka, visibly pleased by the golden-green color dancing in the glass, and by the aroma of fruit, herbs and karst soil that soon fills the room.

This part of Herzegovina revolves around the city of Trebinje and the Trebišnjica river: its inhabitants cannot be understood without drinking their wine first. Wine is the invisible and ever-lasting bond with land and generations, but also the door to open to reach the heart of its alert and hard-working people, but also somewhat suspicious towards strangers, toughened up by a bitter land and difficult living conditions.

“It was right around the fire, during evenings like these, that I used to listen to our elderly speak about grapes that have almost disappeared, even from collective memory”, Jovo says. “That’s when my passion for searching and rediscovering the heritage of our traditional vines started”. That is why today, in his Zgonjevo vines, in the Petrovo Polje plains, Jovo is one of the few people to grow quality that cannot be found anywhere else and for which there are resonant names such as surac, kadarun and plavka.

Along with them, of course, the two vines that have made the history and success of enology in Eastern Herzegovina. First and foremost, the local žilavka, a white wine that bears a full and harmonious taste that gained it a place of honor on the Austrian Emperor’s table. And then, the vranac, a purple-veined ruby wine, with an intense taste rich in evocative aromas (from cinnamon to licorice, from strawberries to oak), that comes from Macedonia and Montenegro and has found in Herzegovina an inbeatable natural environment.

“Since the early ‘90s, wine production in our region has undergone two heavy and simultaneous shocks: war and the parallel disintegration of Yugoslavia’s productive and economic system”, says Slobodan Vulešević while sipping Jovo’s pure vranac. Co-founder of the Slow Food Convinvium Trebinje-Erzegovina, Slobodan Vulešević is a keen lover of the cultural and culinary traditions of his land. “At the time of Yugoslavia, quantity was more important, and production was handled by state companies. Then, with the war, the fields and villages of this area became part of the front line. When the rifles finally fell silent, farmers and wine producers had to reinvent their relationship with the land and the market”.

Some wounds have not yet healed. Today, Trebinje and its surroundings are part of the Republika Srpska, the Serbian entity of Bosnia-Herzegovina. The traditional economic and cultural outlet on the Croatian-Dalmatian coast, and most of all on the tourist city of Dubrovnik, only 28 kilometers away, is still not very practicable [see box]. This, however, has not stopped the bold wine producers of the area, from the smallest to the biggest, from searching new opportunities and approaches to the art of wine.

“This is the time for quality wine. And we are moving in this direction, with respect for traditions, but without fear of new ideas and technologies”. Radovan Vukoje, director of the Vukoje winery, does not hide a warm nuance of pride while telling about himself and his wine business. In just a few years, his family has managed to become a reference in enology in Trebinje and its surroundings, collecting awards and recognitions in all fairs in South Eastern Europe, and beyond.

The first private winery in the area. Vukoje started producing with modern methods in 2005, indeed thanks to Radovan, a professional enologist. Today, Vukoje sells his wine in all countries of former Yugoslavia, but also in Scandinavia, The Netherlands, Austria and Germany. In 2003, Radovan’s family fulfilled its dream: it built and restored “the Emperor’s vines” of Ušće, where the Trebišnjica and Sušica rivers meet. “Between the 19th and 20th centuries, the Austro-Hungarian agronomists described Ušće as the ideal place for the production of žilavka. The wine that was produced here was taken directly to Franz Joseph’s table. That is why we are so proud and excited to have brought it back to life again”.

Some Italian local authorities have been working in Herzegovina for years in support of reconciliation initiatives between territories divided by the war. The promotion of rural sustainable tourism has provided opportunities in this direction. The 'wine and tastes' route, that, passing through Trebinje, in Bosnia Herzegovina, goes all the way to Dubrovnik, is but an example. The initiative is led by Tuscany, in partenship with the Autonomous Province of Trento and the Marche region, and is coordinated by Oxfam Italy within the Seenet II Programme.

Today, Vukoje is a leader amongst the wine businesses of Eastern Herzegovina, with 100-120 thousand liters being produced every year. Not all producers of the area are so big. The choice of quality, though, is fundamental (and is, indeed, decisive) for all of them, even the smallest ones. It is for the winery of Tomo Bojanić, in Pridvorci, where the wine tastes 'simple' and 'honest' like the full-blooded master of the house. Another example, the winery of the Petijević family, among the fastest to develop an integrated form of tourism and tasting: every year, the winery is visited by hundreds of Russian, Italian and Scandinavian tourists getting off the ships docking in Dubrovnik.

There is also the Vinarija Dračevo, owned by the Andjušić family. To get there, a good stretch of the Popovo Polje plain must be crossed, which stretches from Trebinje towards the West, immersed in low clouds embracing a frowning early sky in January. Popovo Polje means wine. Here, every small town, often just a bunch of houses too sparse to be located on a map, has its vines: the townspeople cherish and jealously preserve them, as if each vine were family.

Along the road we are slowly driving on, the snug shape of the Tvrdoš monastery, laying on the banks of the Trebišnjica, bears witness, also physical, to the ancient bond between man and vine. For centuries, monks have produced the wine they needed, and for a few years now, the Tvrdoš winery has started production for the market.

When we arrive in Dračevo, Mladen Andjušić welcomes us to his cellar with a warm handshake and a glass of his best žilavka. Mladen, a retired civil engineer, was among the first after the war to believe in the possibility of going back to living on barrels and rows. ‘I sold my beach house in Herceg-Novi and invested everything here. It was a risk, but it was absolutely worth-while’, Mladen says smiling. “Despite the crisis, things are going well. In Herzegovina, though, the passion for wine allows for no distractions. Work, passion, perseverance. It only takes a second to throw away everything you’ve built in years”.

During the Bosnian war, Popovo Polje was one of the hottest front lines. Among the many disasters of the conflict, the vines suffered and were destroyed. “However, the war did not only write stories of hatred”, I am told by Gordana Radovanović, the true life and soul of the Trebinje convivium. “When my Father, a Serb, had to abandon the vines in his native village, Orašje, literally on the front line, two Croat sisters whom he had often helped in the years before, looked after the vines keeping them alive, during the night and risking their own lives. A gesture of love, not only towards another person, without borders of name and nationality, but also towards this land”.

And indeed the vine, humble and tenacious as it is, is the true symbol of the people of this corner of the Balkans, who are able to wait for the end of the storm and start anew, stubbornly clinging to the stony slopes of the bare, stately and lunar mountains of Herzegovina.