The crushed salt of Macedonia 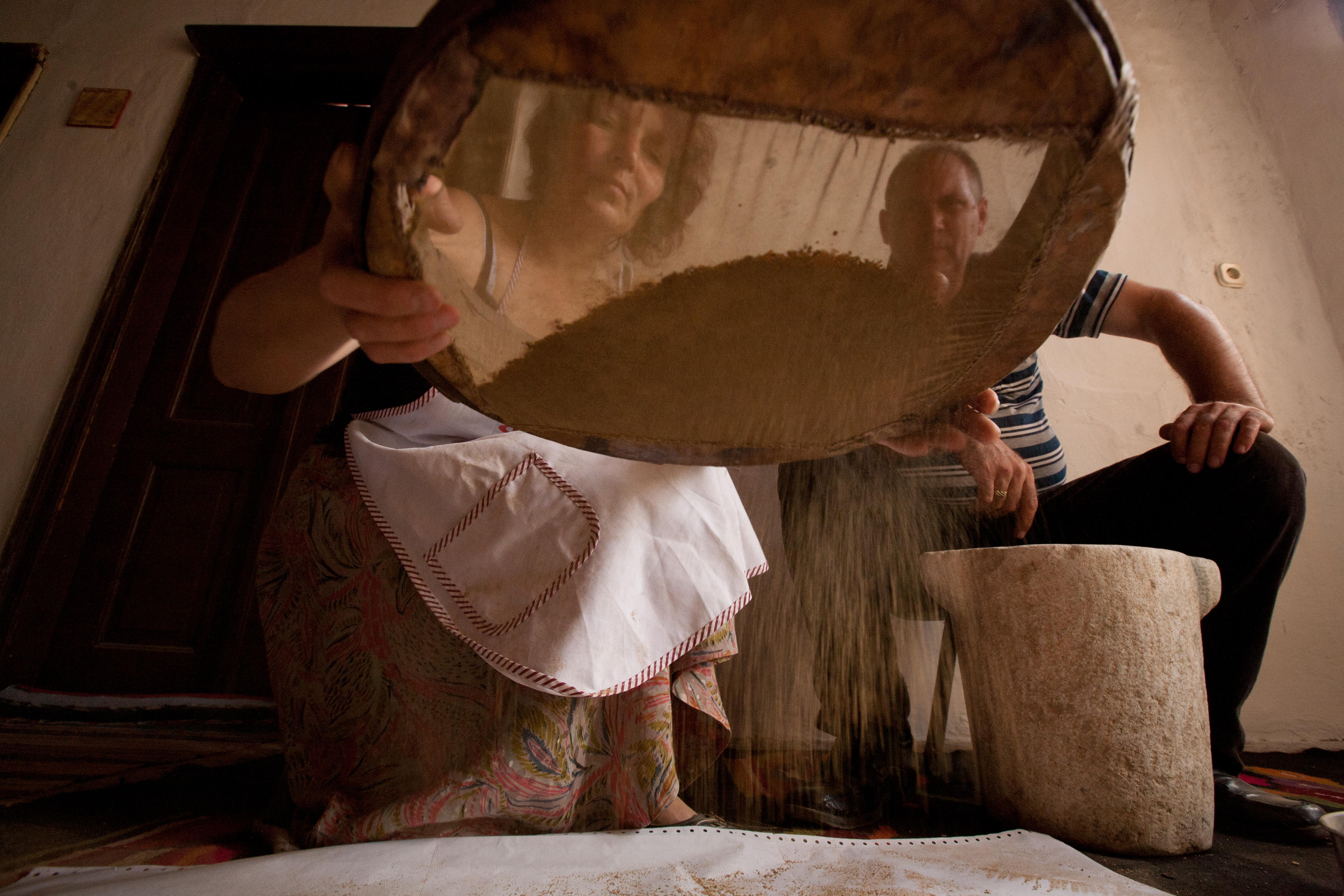 The Donevski family and the crushed salt (Photo Ivo Danchev)

The crushed salt of Kratovo comes directly from the sun and the wind that kiss the Osogovski mountains, in Macedonia. A journey into the secrets of a family that wants to open the country's first “slow hostel”, distant a three-day horse ride from the Aegean sea

A stunning symphony of perfumes and fragrances fills the room. Full, bright notes like peppermint and rosemary alternate with more balanced, humble ones like roasted corn and majcina dusica, hand-picked on the high pastures that adorn the tops of the Osogovski mountains, on the border with Bulgaria.

Stevce, sitting on a low oak stool, ceaselessly grinds the large steel pestle in the dibek, the heavy marble mortar where his wife Valya gradually pours fifteen herbs and flavours. Once reduced to a fine powder and mixed with sea salt, they will create the magic of kcana sol, Kratovo's crushed salt. Stevce's blows are so violent that the entire house, over four hundred years old, trembles from the foundations to the ceiling. We are at the centre of the "Catholic neighbourhood" of Kratovo, a fascinating, little-known town in eastern Macedonia. Hundreds of red roofs fringe the sides of an old crater, marked by deep fissures carved out over time by the rivers Tabacka, Manceva, and Babakarina – fractures the townspeople have patched up patiently over the centuries, building thirteen bridges over the abyss.

Now sleepy, peripheral Kratovo, 6,000 inhabitants, has a rich past associated with the mines of precious metals that still surround the town. Many communities (Turks, Macedonians, Jews, Ragusans, Venetians, Greeks) made it one of the central hubs of the trade routes that, through the mountains and valleys of the Balkans, used to link the ancient Adriatic republic of Ragusa (Dubrovnik) to the Aegean port of Thessaloniki. Today, much of that colourful past is lost (the "Catholics" who left their name to the district, left in the 17th century, gradually followed by the other "not Macedonian" communities), but its signs remain in the high stone towers, built by medieval despots to secure the fortunes extracted from the depths of the earth. And such wealth of nuances is miraculously alive in the kitchen too, where different traditions have created unusual combinations and small magic like the kcana sol.

"The kcana sol is born from the sun and the wind kissing the mountains Osogovski, and mixed with the salt of the Aegean Sea". Stevce Donevski, director of the Kratovo's cave art and Slow Food contact in the area, is one of the few who, with his wife Valya and his son Jakim, keeps this tradition alive. Today, there are about ten families in Kratovo that still produce crushed salt. Of these, only two, including Stevce and Valya, also produce it for the market, especially for some restaurants in the area – the others, only for domestic use.

"There are two types of herbs", says Stevce, "some are grown, others – the most valuable – are collected on the slopes of the mountains. Everyone uses different recipes, handed down for generations and jealously guarded, and different proportions of the ingredients". The earliest herbs are harvested in May, the latest in late summer. A long, patient work – some bloom for only a few days a year, and then vanish. Many of the ingredients are hard to find and expensive. Some of the rarest are the povecerinka, a small herbaceous inconspicuous ear, which expands its perfume only at dusk, and the noktarac, a saffron-yellow medicine, once also used to disinfect wounds. 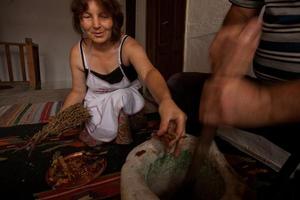 "It is especially women who pick the herbs and sell them at the market of the main centres of the region, Kratovo, Probištip, Kriva Palanka", explains Valya, sifting through the dark dust produced by Stevce's rhythmic beat in the mortar. "All the plants are cut with special knives, with blades in wood, to preserve the aromas. They are hung and dried for two weeks. Then, when everything is ready, we proceed to the final stage, made of labour and experience in dosing every single fragrance".

First you toast the salt, traditionally imported from Thessaloniki ("a three days' horse ride from Kratovo"), with the katar, an iron hollow cylinder in which the salt is introduced, which turns in a cast-iron stove with the long twisted handle. The process takes a few minutes and it is essential in order to make the salt friable under the blows of the pestle. Similarly, and for the same reason, you toast the corn, locally called kukuruz.

The next to gradually disappear in the mortar are peppers (spicy or not), rosemary, basil, peppermint, wild mint, and thyme. And then a kaleidoscope of mountain herbs: smilj, kopar, silina, povecerinka, noktarac. But many manufacturers keep jealously secret at least some of the ingredients that make their salt unique and unrepeatable. Once scrutinized, the final product is a fine powder of burnished colour, reminiscent of the volcanic rocks that dominate the landscape of Kratovo. What has just been beaten by Stevce has a spicy after-taste and a strong peppermint accent.

Crushed salt accompanies all sorts of dishes, from meat to traditional pies called “mantije" to the pastarmajka, a sort of pizza garnished with smoked pork. "The kcana sol, however, is best suited to simple tastes", smiles Valya. To prove it, she and her husband quickly set the rustic table on the ground floor – hard-boiled eggs, sheep cheese, sopska sol (a classic Balkan dish with tomatoes, cucumbers, and onions, covered by a blanket of grated cheese), freshly fried peppers, and baked beans. The kcana sol unleashes its whirlwind of fragrances and spices up every single flavour without covering the simple taste of the dishes. The apotheosis, however, comes with the peta, a small round bread, baked in wood, typical of Kratovo and the surrounding region. With measured, confident gestures, Stevce breaks the bread and pours a few drops of olive oil on the soft, white surface stripped by the blade. And then comes the kcana sol. "There is nothing more humble, and more tasty", says Stevce, grinning while he offers us the peta.

Stevce and Valya know what they want. The kcana sol and the ancient world it represents can be preserved only by keeping pace with the times and making them part of an integrated tourist, cultural, and culinary package. A stimulating challenge, but a difficult one, given the economic difficulties of Macedonia, made more severe by a delicate domestic political situation and neighbouring Greece's veto on the country's possible entry into the European Union over a long-standing dispute on the constitutional name of the country (Athens believes that "Macedonia" is a name historically pertaining exclusively to Greece).

That's why Stevce and Valya are renovating the old house in the "Catholic neighbourhood", overlooking two of the ancient towers of Kratovo, the Krsteva Kula and the Srezna Kula. "In order to be sustainable, tourism can not be hit-and-run. Enjoying the bridges and cobbled streets of Kratovo, the landscape of the Osogovski mountains, the quietness of medieval monasteries like Lesnovo, the neolithic astronomical observatories of Kokino and Cocev Kamen takes time and the slow pace we have been taught for generations", says an inspired Stevce. In their dream, the house will become Kratovo's first "slow hostel", the starting point to discover the secrets of this ancient, unexplored land. "Our guests, if they wish, will also be able to learn to cook the dishes of Kratovo. And why not, to make the kcana sol", adds Valya. "After all, you cannot say you really tasted the inner soul of our land if you have not tried the crushed salt".