Media in Macedonia: in crisis 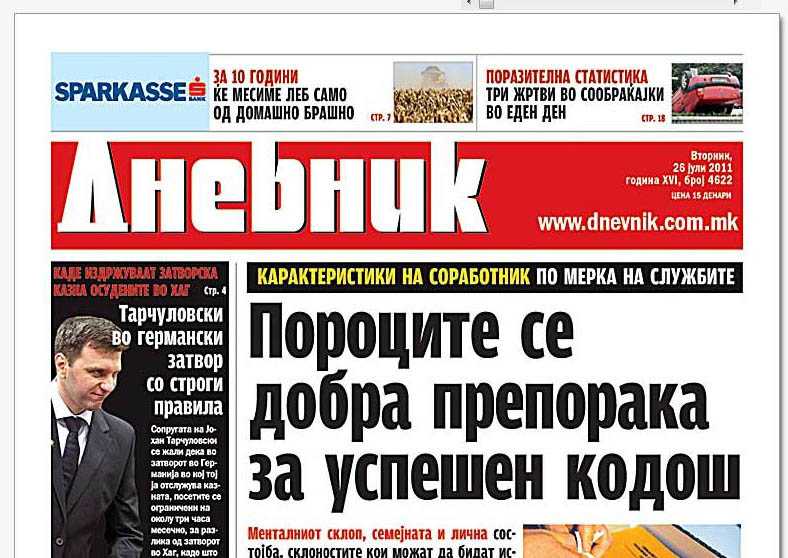 A serious crisis hitting the Skopje media. Many are closing down. The opposition media are penalised and they label the Law adopted by the Parliament as partisan. What is most worrying is the absence of a critical and objective voice.

It appears that the media in Macedonia are moving from bad to worse. The trend is not new, but it is not abating either. Even before being properly seated, the newly constituted new parliament adopted a new law on broadcasting. The bill changes the governance of the broadcasting council by increasing its members. The opposition criticized the move and said the government wants to take control of the powerful regulator by filling the new seats with supporters. The MPs of the ruling VMRO DPMNE party retorted that an active member of the opposition chaired the institution, thus it was already partisan. The issue is not so much the new law, however, as how the law was pushed through, without consulting the council or Macedonia’s media community. The ruling party dismissed protests from media groups and think tanks as being similar to those of the opposition.

The three dailies Vreme, Shpic, and Koha e Re that belonged to the media mogul Velija Ramkovski were published for the last time on 2 July. The Public Revenue Office (PRO) said they owed an estimated one million euros in taxes. Unable to pay, the newspapers shut down and approximately 150 journalists lost their jobs. Their closure follows a major government clampdown on the Ramkovski media group, noted for his strong anti-government orientation. Ramkovski’s major media outlet, the national A1 TV channel, could also close because the PRO claims that A1 TV owes back taxes of close to 10 million euros. Last week, the special police helped PRO officials impound some of A1’s vehicles. Since December 2010, Ramkovski, whose trial started recently, has been in detention on a range of financial-crime related charges.

In early July, an opposition daily Utrinski vesnik, part of the German WAZ media group of newspapers in the country (together with Dnevnik and Vest) cited financial difficulties when dismissing several journalists and announcing plans for future layoffs. The paper might even close down. A month earlier, the weekly Globus, a staunch critic of the government, went bankrupt.

Journalists responded to Macedonia’s media situation with protests in early July in the centre of the capital Skopje.

Of course, media that cannot pay their bills normally should stop working. Media owners and companies should pay taxes like everyone else. Nevertheless, the media in financial trouble are those opposing the government in Macedonia.

Somewhat earlier, in April, Macedonia’s most influential daily, Dnevnik, also part of the WAZ media group, underwent an interesting transformation. The paper always kept an independent course, criticizing equally all governments. In the last couple of years, Dnevnik entered into open confrontation with the VMRO-led government. Or, more accurately, the government entered into open confrontation with Dnevnik. In early April, the newspaper replaced the editor-in-chief, Sasho Kokalanov, a strong government critic. All major pro-opposition columnists left. Practically overnight, the paper changed course, and became almost embarrassingly pro-government. “Because of inertia, I still buy it,” says an observer, “but I can’t read it.” According to some analysts, Dnevnik also changed course because of financial reasons. The single largest advertiser in the Macedonian market has become the VMRO-led government, with its constant public campaigns on issues ranging from love for the motherland to the negative consequences of abortion. As a government critic, Dnevnik had lost the well-paying government ads. With Dnevnik’s sudden conversion, however, the large Macedonian audience lost a real independent paper.

More worrying than a few media outlets converting or closing down – perhaps there were too many for a market of 2 million – is the increasingly difficulty to find an independent voice in all the noise. Practically every media outlet seems to serve a partisan agenda, which is sometimes shamelessly pursued.

Undoubtedly, Prime Minister Nikola Gruevski rules with a heavy hand. The space for dissent in the country has shrunk. However, A1 television had some people who were poor journalists. The same can also be said of its pro-government alter ego, Sitel TV.

Politics and private interests of owners had such a grip over the media space in recent years that it has become difficult to find unbiased news. Journalists say they have a difficult job in Macedonia. That is probably true, but many of them really did not seem forced to be biased.

Many of these events relate to the decline of the Ramkovski media empire. Some developments result from the lack of professional standards. The current leadership’s incapacity to accept dissent also bears much of the blame.

Because of communist times, 16-17 years ago, Macedonia did not have media freedom. Then, media space opened and the media industry experienced a dramatic rise in electronic and print media outlets. Thousands of jobs were created. Perhaps, the current contraction results from previous overheating. I hope that the contraction is temporary. The truth perhaps does emerge from the confrontation of opposing viewpoints. A citizen, nonetheless, needs a voice that tells it as it is.