The whistleblower who overthrew Macedonia’s government 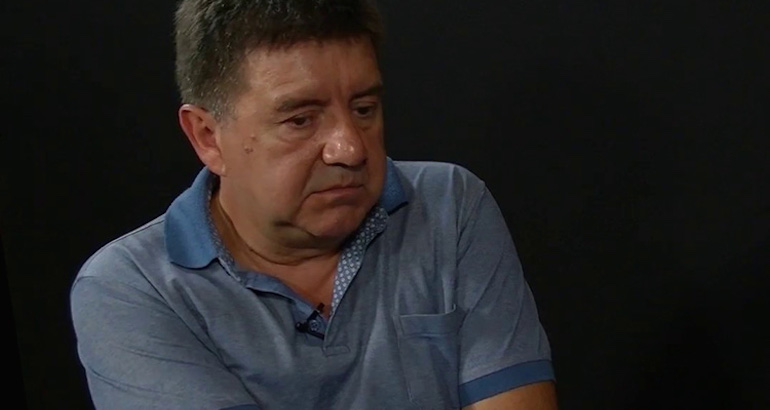 For long-serving spy Gjorgi Lazarevski, a 2010 raid on one of Macedonia’s few remaining independent TV stations was the last straw.

For two years, he had watched his country slip into what he thought was a dictatorship. Then the engineer, who had been working for the secret service for 25 years, threw himself into a quest that was much more likely to get him arrested than to overthrow the government. Eventually, it did both.

Lazarevski was one of the three Macedonian intelligence agents who helped topple the allegedly corrupt and authoritarian regime of the then-Prime Minister Nikola Gruevski by leaking hundreds of thousands of audio files. The recordings had been made by regime loyalists from his agency while illegally wiretapping thousands of Macedonians over three years.

Lazarevski had known about the massive interception of conversations -- which took place without court orders -- since 2008. But when he saw special forces raiding A1 TV, a station that had been critical of the government, he finally had enough. "It was a shock for us,” Lazarevski remembered. “I did not expect to experience such a thing in Macedonia,” he told OCCRP.

With Zvonko Kostovski, a colleague who worked on the unlawful surveillance but felt the same way about it, Lazaraveski developed a plan. Kostovski would secretly make copies of the controversial files and Lazarevski would take them out of the building and decrypt them on a private computer.

Thousands of Macedonians, including ministers, government employees, journalists, and judges were wiretapped. The two agents often could not believe what they were hearing: conversations that revealed high-level corruption; government influence of prosecutors, judges and media; extortion of businesses; discussions of politically-motivated arrests, election-rigging, and even attempts to cover up a murder.

At first, the two agents worked alone. But the scope of wrongdoing revealed in the files kept growing, and they soon discovered that even Gruevski’s Interior Minister, Gordana Jankulovska, had been wiretapped.

That’s when the two agents realized the magnitude of the information they were sitting on and started to consider bringing in someone else. They approached Zoran Verusevski, the former chief of intelligence. "Both Zvonko and I trusted Verushevski,” Lazarevski said. “He used to be our superior. He is a professor, and he’s the one who taught me that corruption is the biggest threat to the security of a state.“

Meanwhile, in 2013, police conducted an operation codenamed "Spy," aimed at finding moles within the agency. Afraid of being exposed, Lazarevski quit his job. "An atmosphere of fear had been created,” he said. “Everyone was scared.”

Kostovski was also afraid -- but Verushevski convinced the two that they were “on the right side." He soon shared the audio files with Zoran Zaev, head of the country’s opposition party, the Social Democratic Union of Macedonia. In a September 2014 TV interview, Zaev announced that he would soon make big revelations he referred to as “bombs.” Macedonia started to simmer.

But a few months later, after searching Verushevski’s computer and finding his correspondence with Lazarevski, the police arrested him on January 23, 2015.

This is what prompted Lazarevski to go to the Ministry of Interior and report the wiretapping. "I testified in front of a colleague in the police station. There was a prosecutor in the next room,” Lazarevski said. “I told the truth to two institutions, but instead of giving me the status of a whistleblower, I was charged with espionage," he said, describing the drama he, his family, and the whole country were going through.

In response, three days later, Zaev played the first batch of the audio files to reporters, exposing pressure on the judiciary, election rigging, and corruption. He continued to play the files in a series of weekly press conferences, shocking the public with revelations about the brutality of Gruevski’s regime.

Macedonians heard orders to beat opposition politicians, to set regime opponents’ properties ablaze, threats of murder, and corrupt deals. Gruevski counterattacked, accusing the foreign intelligence services of manufacturing the recordings in order to “brutally destroy” his party and the country. Macedonia boiled over.

Days-long street protests staged by Gruevski supporters on one side and Zaev supporters on the other brought the country to a halt, prompting the European Union to get involved. The EU negotiated early elections and the appointment of a special prosecutor mandated to look into the scandal.

Gruevski had wiretapped allies and opponents alike. An investigation conducted by experts hired by the European Commission concluded that his government had misused the security service “to control top officials in the public administration, prosecutors, judges and political opponents.”

In December 2015, Zaev submitted 606,555 audio files of the illegally wiretapped conversations to the new Special Prosecutor's Office. In May 2017, he won the elections, but because of obstructions by Gruevski’s supporters, he was able to form his government only half a year later.

Kostovski, Lazarevski, and Verushevski watched most of this from their jail cells, where they spent 11 months before the Special Prosecutor's Office dropped the charges against them. At the same time, prosecutors opened a new investigation into the former minister of interior, the intelligence chief, and his closest associates.

“While I was in custody, my optimism was upheld by the everyday events that were leading towards the breakdown of the system I thought was impossible to crush,” Lazarevski said. “People were thrilled with the developments and that gave me strength,” he added. It was painful to hear a colleague in the intelligence service defending Gruevski’s regime and accusing Lazarevski and his co-conspirators of “undermining the reputation of the service.”

"I think that we saved the reputation of that institution,” he said. In fact, he added, it was the employees who watched what was happening in silence who undermined its reputation.

Now, though he still feels guilty for what the three families went through, Lazarevski looks back at the episode with no remorse. “The pleasure of knowing that we managed to unmask an evil system is great,” he said. “What happened was exactly what I wanted. It ended like a fairy tale.” “I did not live in vain.”