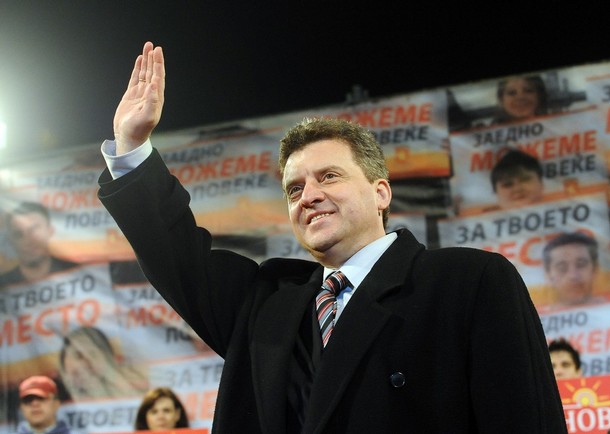 Gjorgji Ivanov has won the presidential elections with about 63 percent of the votes. The most important thing for the country, as is widely agreed, was the fact that the election was free and fair

Macedonia has a new president. The second round of presidential elections held yesterday, together with the run-up of the local vote, brought victory for Gjorgji Ivanov. Running as a candidate of the ruling Internal Macedonian Revolutionary Organization - Democratic Party for Macedonian National Unity (VMRO-DPMNE) party, Ivanov convincingly beat his opponent from the opposition party, the Social Democratic Union of Macedonia (SDSM), Ljubomir Frckoski, with a ratio of almost two to one. Ivanov won 63 percent of the votes whereas Frckoski won around 36 percent. The 40 percent turnout threshold necessary for a valid second round was barely met with about 42.8 percent of voters coming out to the polls.

Fortunately, there were enough voters to get the job done. Otherwise, a repeated presidential vote would have had to have been organized within six months. The country only recently lowered the voter turnout threshold from 50 to 40 percent ahead of the elections. The new president-elect and his opponent are both professors at the Law School in Skopje and former collaborators. They co-authored a textbook on political theory several years ago. The campaign they led was bitter and not lacking in insults. Most of the insults came from the contentious and traditionally-prone-to-sharp-language Frckoski.

Gjorgi Ivanov replaces incumbent Branko Crvenkovski, a veteran politician who was twice prime minister before taking on the presidency in 2004 after the tragic death of his predecessor Boris Trajkovski. After stepping down next month, Crvenkovski will return to the helm of his native social democratic party.

The presidency is the crown jewel in VMRO's rise to power over the last few years. In 2006, they ousted SDSM and took office in the regular parliamentary election. In a snap vote last summer, called under the pressure of the NATO Bucharest fiasco when the country was denied membership to NATO on account of Greek veto, they practically swept the social democrats away and won a majority which no party had ever reached in previous Macedonian democratic history.

At the local vote this year, held in conjunction with the presidential one for cost-saving purposes, they won in 55 out of the 84 municipalities in the country. SDSM won a majority in only six municipalities; 14 were won by the Democratic Union of Integration (DUI) of Ali Ahmeti, at present a partner in the ruling coalition of VMRO. Four were won by independents; one, but nevertheless a major one, the city of Tetovo, by the Democratic Party of the Albanians (DPA) of Menduh Taci, and the rest by smaller parties. In the words of Zoran Zaev, SDSM acting president until Crvenkovski's return, at yesterday's defeat acceptance speech, "VMRO has all the power in the country, and thus all the responsibility."

The most important thing for the country, as is widely agreed, was the fact that the election was free and fair by most accounts. The major election monitoring pundit, the Office for Democratic Institutions and Human Rights (ODIHR) of the Organization for Security and Cooperation in Europe (OSCE,) said at its press conference today that the second round was even better than the first one, which had already been declared in line with international standards. Irregularities, such as occasional instances of family voting, intimidations, technical setbacks etc., according to the ODIHR, still remain, but nevertheless, the assessment was a "generally positive" one. For other countries, this would be business as usual but, alas, it is quite an achievement for Macedonia.

Congratulations arrived from all sides today as if the country had emerged victorious from a war. The press coverage said Macedonians should be proud. 'Proud of what,' someone might ask. Well, proud of not having shamed themselves again. Last year's vote was a sham marred with violence and this is the tradition rather than an exception in Macedonia. As a result of the awful 2008 election, the country received a bluntly negative report from the European Commission (EC) last November and it did not get a date to start negotiations with the EU. Having a free and fair vote was the prime condition set by the EC to even consider the possibility of the (mythical) visa liberalization before the end of this year and a possible date to start accession talks. Macedonian politicians, as they are the chief culprits of electoral irregularities, luckily got a grip on themselves and behaved. In addition, many police were deployed throughout the country to ensure that things went smoothly.

The election will probably also be remembered for its hardhearted and selfish partisan calculations. Two strong candidates for head of state did not get a real chance on account of egoistic party interests. Srdjan Kerim, a seasoned diplomat and former chair of the UN General Assembly was found by all polls to enjoy the strongest popular support. He was not given a chance to run because neither SDSM nor VMRO would support him. The media speculated that his personality was just too charismatic and, therefore, that he was perceived as a threat by the leadership of both largest parties in the Macedonian block.

Imer Selmani, former minister of health from DPA, as of recently chief of a new Albanian party called New Democracy and seemingly a decent guy, ran on a so-called "Obama platform" to be the first non-ethnic Macedonian president. He could have tangibly entered the second round - he did manage to get a substantial amount of ethnic Macedonian votes - had he not been prevented by DUI and DPA which, after having done the math, also nominated their own candidates to disperse the Albanian vote. Nothing would have been better for improving the tarnished image of Macedonian democracy abroad than having an Albanian for a president, but the country is obviously not there just yet.

Two underdogs made a comeback in this election. Former interior minister Ljube Boskovski, who spent close to four years in detention at The Hague on war crime charges but released after being acquitted last summer, ran as an independent after not having obtained the endorsement of his native VMRO. He did not enter the second round reserved for the top two contenders, but he won substantial support in the first round. He might decide to create his own party. The second is Rufi Osmani. Osmani was the hero of the Albanian protests of 1997 when he refused to take down the Albanian flag from Gostivar's town hall building. Following clashes with the police and human casualties, he was tried and served time in jail. He was pardoned by president Kiro Gligorov under heavy pressure from the international community. In recent times, he has been teaching. He ran again in Gostivar and won convincingly against the candidate of DUI.

After several elections in previous years, all of them tense and polarizing, the Macedonia citizen is fed up and overdosed with politics. It is now time for politicians to roll up their sleeves. The next vote will hopefully not be before 2012.