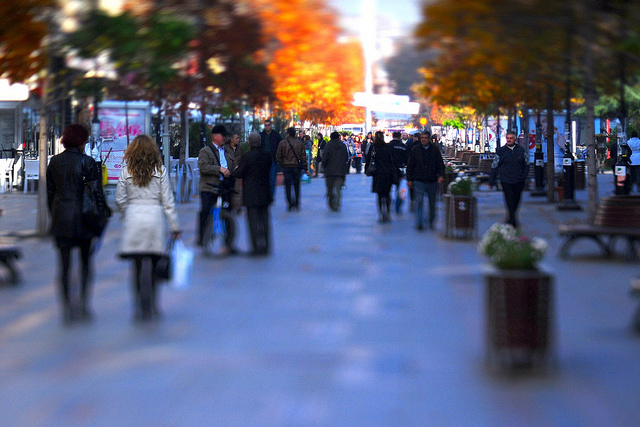 On 28 January, the major opposition party in Macedonia, the social democrats (SDSM) decided to stop participating in parliament. They said they had enough of the authoritarian behaviour of prime minister Nikola Gruevski and the rightwing, VMRO DPMNE government. According to the SDSM party, working within the system no longer made sense.

The sudden decision was directly prompted by the freezing of the bank accounts of the major opposition TV channel A1 (up to 4.5 million euros of future revenues), whose owner, Velija Ramkovski, is still in detention and of several daily newspapers controlled by Ramkovski: “Vreme”, “Spic”, and “Koha e Re”.

A1 has been the subject of a large criminal investigation, together with many other companies owned or controlled by the media mogul Ramkovski. The crackdown on A1 appears to be a response to Ramkovski and his media’s strong opposition stance to the Gruevski government.

“We leave to Gruevski the parliament as he always wanted it – without opposition,” said SDSM leader Branko Crvenkovski, announcing the boycott by his party. “We also leave to him Sitel and Kanal 5 [two other major TV channels, which are pro-government], his company of crawlers and thugs.” “SDSM moves on the other side of the barricade, with the people,” concluded Crvenkovski’s dramatic statement.

Following SDSM’s move, several smaller parties also left parliament, including the New Social-Democratic Party (NSDP), the Liberal Party (LP), as well as Albanian New Democracy (ND) of Imer Selmani. The major Albanian opposition party in the country, the Democratic Party of the Albanians (DPA) of Menduh Taci, has already been boycotting parliament since 2009.

Boycotting parliament to express discontent is a frequent action in Macedonia’s fledgling democracy, but never has boycott been so widespread. With almost everyone else outside parliament, practically the only ones participating are the ruling VMRO and the Democratic Union for Integration (DUI) of Ali Ahmeti, the junior Albanian coalition partner. A few smaller parties keep them company. The country has a serious parliamentary crisis.

Nevertheless, prime minister Gruevski and his coalition act as if nothing has happened. According to them, there is no crisis in the country since all institutions of government function normally.

However, the parties that left the parliament insist that only early elections will preserve democracy. That might not be easy. Recently VMRO rejected SDSM and Crvenkovski’s challenge to have an early vote. The ruling party has significant advantage over SDSM, according to all the polls, and Gruevski’s ratings are much stronger than those of Crvenkovski.

Unless all the polls in the country are rigged or flawed, if an election would take place immediately, VMRO would easily defeat SDSM. Naturally, the results of the ethnic Albanian-dominated parties and the results of smaller parties would also count for the creation of a new government.

On 2 February, the partner in the governing coalition, DUI, decided in a meetings of its presidency that it would not support an early election, even though current polls indicate an election “would be in its narrow interest”. DUI said the country had other more important issues. The party specifically opposes a vote before the national census scheduled for April.

Currently, the international community seems to be making up its mind on how to react. The usual response to boycott of parliament is to urge the strikers to return. Calls have also been issued this time, but they seem half hearted. The EU ambassador to Macedonia, Erwan Fouere, started a series of meetings with political leaders.

At his meetings with SDSM and Crvenkovski on 2 February, Fouere reportedly called the social democrats to return to parliament. The only way forward is “a true, honest, political dialogue”, he said after the meeting. He added that the government failed in implementing Brussels’ recommendation for improved political dialogue, which eventually led to the current situation.

The previous day, Fouere met with DPA and its leader Taci, whereas the UK and French ambassadors met with SDSM. They both referred to the freedom of the media as a democratic precondition.

In a written statement to the Macedonian Information Agency (MIA) the United States Embassy’s Public Affairs Officer, Angela Aggeler, expressed concern over the situation, citing threats on independent media, the judiciary, and the Euro-Atlantic integration of the country.

During the last week in January, US ambassador Philip Reeker met with prime minister Gruevski, immediately after the accounts of the Ramkovski media group were frozen. After the meeting, with a mildly angry tone, he said he was worried over the latest events in the country.  His statement, although moderate, has so far been the clearest expression of discontent with recent developments and the government’s behaviour.

On 2 February, Slovenian foreign minister Samuel Zbogar met in Skopje with prime minister Gruevski and the Macedonian minister of foreign affairs, Antonio Milososki. He also expressed concern, but nevertheless said his country continued to support Macedonia’s European integration. Foreign minister Milososki blamed the situation on the irresponsible behaviour by the opposition. He said SDSM’s actions damaged the international reputation of the country.

Currently, the international community seems to be coordinating its position, or perhaps following a wait-and-see strategy. Very recently the European Commission, in its annual report on Macedonia, said the country had progress (even though uneven) in all areas and continued to meet political conditions for start of accession talks, currently blocked by a Greek veto over the name issue. Now, a significant crackdown on media suddenly resulted in a major political crisis.

Striking a balance seems difficult in the complicated situation. The government seems heavy-handed with the media controlled by Ramkovski, apparently because he is a political opponent. However, Ramkovski, over whom the crisis started, and his media do not exactly embody objective and impartial journalism (but nor do other media in the country for that matter, with perhaps rare exceptions). In reality, many gloat over the fate of A1. Many say, “It had it coming.” The media mogul himself is not actually perceived as a good example for corporate ethics.

However, many citizens now agree that prime minister Gruevski expresses clear authoritarian tendencies. His government does not seem able to accept dissent of any kind. The government dares to directly reproach courts over decisions it does not agree with. In front of cameras, handcuffed suspects are too easily and too spectacularly thrown into jail and detained for months.

Furthermore, the SDSM opposition party created a political crisis for its own political gain. Crvenkovski, a patriarch of power (two times prime minister, one term as president), given current ratings, might be calling a major bluff in perhaps his last chance to return to power. Pressured, Gruevski might just decide to accept the challenge.

Street democracy is not likely to resolve much of anything. Macedonia is not quite there yet, even though it is heading in that direction. An early election, even though it would be a great waste of time, could result in some clarity. Democracy is a struggle, after all.