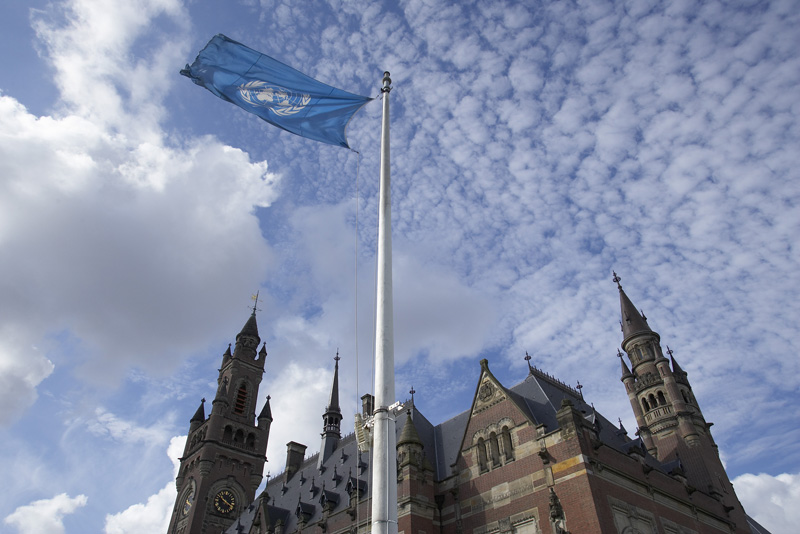 Skopje filed a petition against Greece at the International Court of Justice (ICJ) on grounds of violation of the 1995 interim accord between the two countries. Skopje asks the ICJ to order Athens to refrain from further obstructing Macedonia's integration in international organizations

Macedonia filed a petition against Greece at the International Court of Justice (ICJ) on November 18 2008, on grounds of violating the 1995 interim accord between the two countries. Skopje accuses Athens of having broken the agreement by vetoing its bid to join NATO at the NATO summit in Bucharest in April 2008. Macedonia argues that with the 1995 interim accord Greece bound herself not to block Skopje's integration in international organizations as long as Macedonia acts under the temporary name FYROM (Former Yugoslav Republic of Macedonia).

The interim accord ended an 18-month Greek embargo against Macedonia and it ensured gradual normalization of the two countries' relations. Early in 2008, their relations collapsed again because of Greece's threat to veto Macedonia's international integration unless Skopje conceded on the name issue.

The ICJ confirmed the receipt of the petition on the evening of November 18.

Skopje's action comes after months-long consultations with prominent legal experts on the viability of the move.

Macedonia said the petition would be limited to Article 11 of the interim accord regulating Greece's duty to refrain from blocking Macedonia's international integration. Skopje did not ask the Court to rule on the long-standing name dispute between the two neighbours. On this issue, the country will remain an active party in the negotiations led by UN mediator Matthew Nimitz.

"We remain committed to the negotiations on the name issue," commented Foreign Minister Antonio Milososki when announcing the petition on November 18.

Milososki stated the country decided to turn to the ICJ in order to protect its rights outlined in the interim accord.

"We have thought very carefully about this, but we do not see another way to have justice. We hope this step would force Greece to respect its international obligations. Macedonia was prevented from obtaining an invitation to join NATO. Such violation of the interim accord places the country in a situation of legal uncertainty, and it questions the credibility of international agreements," said Minister Milososki.

Milososki is appointed as Macedonian's representative in proceedings before the Court.

The Greek Ministry of Foreign Affairs reacted by claiming that Athens has not violated the interim accord. The Greek Foreign Ministry's spokesperson, Giorgos Koumoutsakos, issued a statement on the Foreign Ministry webpage noting that with this move Macedonia further demonstrates a lack of interest in a timely solution to the name dispute. According to the statement, Macedonia continues with its strategy of delaying the negotiations and that Skopje had, on many occasions, also violated provisions from the interim accord and ignored basic principles of good neighbourliness. The Ministry announced that Greece will submit respective evidence to the Court.

In a phone statement for Macedonian media, just minutes after the Macedonian government announced their petition, Koumoutsakos revealed that Greece had expected Skopje's move. The major opposition party in Greece, PASOK, announced that with this action the nationalist leadership in Skopje steers the negotiations into a dead end.

According to former Macedonian Foreign Minister, and until last September President of the UN General Assembly, Srgjan Kerim, the verdict should not be expected to produce a miracle, even though it is legally binding. The power of the UN Security Council to compel states to implement the Court's decisions is limited. Even if Macedonia wins the case, "Greece could not be obliged into actions it deems unacceptable."

According to Kerim, as cited by the daily newspaper Dnevnik, "The Court decision will nevertheless be an important indicator for the Security Council members, and they will have to consider it, if they eventually decide on the issue."

Macedonian media report that the government has notified the UN mediator Nimitz, and that it has informed partners in the international community. According to media reports, neither Nimitz nor anyone else has objected to Macedonia's decision. The Foreign Ministry also informed the diplomatic corps in the country.

The French Ambassador to Skopje, Bernard Valero, said the issue is now in the hands of the court. He nevertheless welcomed Macedonia's commitment to negotiating. "Macedonia has obligated itself to continue to negotiate and this is a step in the right direction," said Valero.

Yesterday, there were no reactions by Brussels or Washington. NATO's spokesman James Appathurai said the alliance would not comment on the issue as it was a judicial matter.

Reactions to this latest development have not yet been announced, even from political parties in Macedonia. Few political actors in Macedonia stated their position on November 18.

The Macedonian president Branko Crvenkovski who has continuous political confrontations with Prime Minister Nikola Gruevski, said he was not consulted about the move. The president's cabinet stated that the government's failure to consult the president on such an important matter constituted a violation of national legislation on foreign affairs.

However, the president did not criticize the move, but only lamented that he was left out of consultations. Earlier this month, when speaking before the Parliament, President Crvenkovski also said it was Macedonia's legitimate right to consider judicial measure in response to Greece's "violent breach of international law and mutually agreed obligations". In the president's view, Macedonia must seriously consider such an option. The International Court of Justice must rule on the matter within four years.