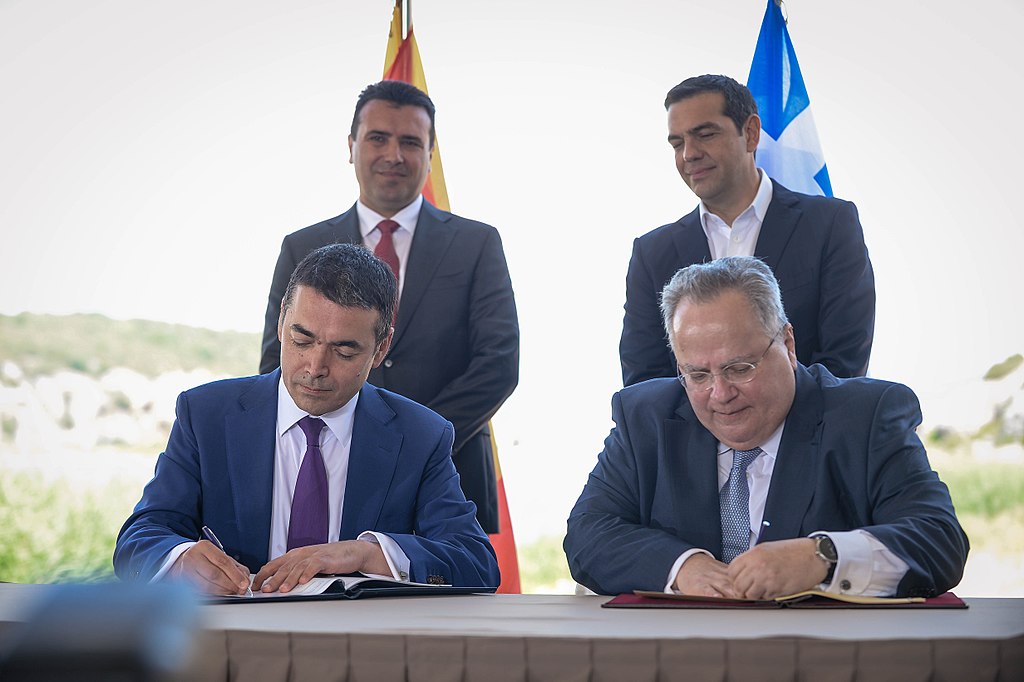 The signing of the agreement in Pespes (photo by Gov. Rep. Macedonia )

What the agreement really offered, apart from turning the page for two Balkan countries, is a chance to observe political tendencies in Greece, by highlighting parties’ true colors and capacities

Janurary 24, WEF in Davos hosted the first in years, bilateral meeting of the Greek PM Alexis Tsipras and his Macedonian counterpart, Zoran Zaev, about the name of the latter’s country. Six months later a historical agreement was signed that is believed to set new foundations in the two countries’ relations and change dynamics in the Balkan Peninsula.

The name dispute goes back to early ’90s, when the breakdown of Yugoslavia created new countries that needed to secure individual national identities. The former Yugoslav province declared its independence on 6 September 1991 as “Republic of Macedonia”.

In the course of the years to follow, Greek side opposed the use of the term “Macedonia” by the neighbor country on historical ground and blamed it for having irredentist intentions towards Greece whose northern region is also Macedonia.

After the Interim Accord of 1995, Greece refers to the country by the technical term FYROM -although, obviously the “M” in the acronym doesn’t stand for “Madagascar”- and continues to veto Macedonia’s membership in the EU and NATO for as long as the dispute remains.

Meanwhile, the two countries developed economic and business relations and Greece adopted [as early as 1995 - officially after 2008] a more moderate approach on the issue by supporting the solution of a compound name with a geographical qualifier that would be used in relation to everyone, domestically and internationally [erga omnes].

While attempts for dispute resolving had been made again in the past, the right timing that would lead to the agreement of June 17, 2018, was marked by the 2017 political change in Macedonia and the election of the center-left Zoran Zaev.

Eventually, the governments of Greece and -the now North- Macedonia signed in Prespes, where they share a border, a mutually satisfying preliminary agreement, though both countries’ oppositions demonstrate strong objections.

The name dispute had its roots mainly in culture. Greek society is sensitive with what is thought to be a distortion of Greek history. Alexander’s the Great statues in (North) Macedonia, among other moves to correlate ancient Macedonia’s history with the Slavic country, triggered Greek nationalist reflexes.

As it had happened again in the 90s, major demonstrations were organized around the mantra that “Macedonia is Greek”, but this time there was clearly a part of the society that would support the agreement.

PM Alexis Tsipras and Minister of Foreign Affairs, Nikos Kotzias, would assure Greeks in their televised proclamations and interviews that the agreement safeguards Greece’s cultural heritage, as (North) Macedonia will have to withdraw any claims of ancient Greek history that were particularly showcased by the massive ancient Macedonia-tribute statues of the Nikola Gruevski period.

Interestingly, it seems that the embracing of ancient Macedonia by the Slavic state is a relatively recent phenomenon. Tassos Kostopoulos, Greek journalist and author specialized on the issue notes to Osservatorio: “The more Greece was trying to provoke diplomatic asphyxiation to FYROM, the more it pushed it towards hijacking ancient Macedonia. The country’s relationship to ancient Macedonia was non-existentbefore 1991. Alexander the Great is an imported (symbol) from the diaspora of Toronto and Melbourne. In the1980s noone cared about the issue, neither here nor in Skopje, but people of diaspora would quarrel about it. The Yugoslav identity, during the times of Tito, was built on the Slavic identity and the Slavic past. Diaspora wanted to renounce the Slavic identity, which is somewhat related to communism and to highlight the ancient times, so they made a big (historic) leap”.

If the agreement is ratified by the two countries, first by the parliament of (North) Macedonia and then of Greece, it will mean that the former will have agreed to change not only its name but also its constitution and declare that has no territorial interests on the Macedonia region of Greece, while it will clarify that is not culturally or historically connected to ancient Macedonia. Meanwhile, goodwill gestures already include the renaming of Skopje airport and the motorway “Alexander of Macedonia”, to “Friendship Highway”.

Greece will then agree to (North) Macedonia’s EU and NATO membership.

In Greece, a no-confidence motion was filed Friday, June 15, against the government by SYRIZA’s main opponent, New Democracy (ND), over the name deal, -it was rejected with votes 153-127, while 20 MPs didn’t came to vote.

As professor of international law and foreign policy Angelos Syrigos who has served as ministerial senior official in ND’s government, puts it: “The motion was made to strike ANEL (e.n. SYRIZA’s government partner) and humiliate them. No one expected that the government would fall, but that it would reveal ANEL’s absurdity”. Indeed, an ANEL MP was expelled from the party after voting for the motion, reducing government’s majority.

Dimitris Christopoulos, academic, president of FIDH and writer about the Macedonian issue among others, also notes that “the deal creates a political problem in the government because it destabilizes the alliance of SYRIZA-ANEL. Indeed, there will be some losses in Northern Greece, but SYRIZA is not a ruling party like the ones of the past that used to have 48% (of voters). Now the ruling parties have half of it, so the supporters of SYRIZA will remain -they won’t leave because of the agreement”. Besides, the progressive SYRIZA voters seem to be pro the agreement.

As debates and extensive analysis on the matter inundate the media, the now internal dispute focuses mainly on the characterization of (North) Macedonia’s language as solely “Macedonian” and the citizenship wording [Macedonians instead of North Macedonians].

Professor Syrigos says that the “erga omnes” condition, which has been the national negotiating position for years and which the government demonstrates as one of the agreement’s virtues, hasn’t been really achieved: “For example, South Africa’s residents are called South Africans, but North Macedonia’s will be referred to as Macedonians. Apparently, the government failed to successfully negotiate at this point”, he says.

Syrigos points out that the agreement served as a tactical move by SYRIZA aiming to divide the opposition. “I believe that SYRIZA acted with an in-house agenda. They believed they could disrupt the opposition and break it into two parties, (…), one of the reasonable ones and another of the extreme rights”, he says.

Journalist Kostopoulos believes that “The re-activation of the left- right cleavage, works favorably for the government. It inspires (SYRIZA) supporters or re-rallies round those that were disappointed from the signing of the bailing out agreements”.

Foreign analysts seem to believe that the leader of ND, Kyriakos Mitsotakis, will eventually support the agreement, despite now embracing the far right side of his party. However, in his interview at the Greek TV channel SKAI on Monday, June 25th Mitsotakis appeared adamant that he won’t vote for the agreement when it is brought to parliament. He underlined that the agreement leaves space for irredentist claims through the recognition of a “Macedonian nation”.

“New Democracy followed a policy of intransigence just to avoid fragmentation. If Mitsotakis followed a consensus policy, then he would have a problem with his right edge. This policy was aimed at avoiding shocks in the short and medium term, and this has been won. On the other hand, this shows that the conservative party can hardly have a truly liberal leader and the image of ND abroad is now of a party that has characteristics of the old annoying Greece and this won’t be easy for him to manage later on”, Dimitris Christopoulos concludes.

While recent economic developments in Greece dominate the political agenda, the debate for the name agreement with Greece’s neighbor will start fading until it will be again needed to serve various political interests in the country. What the agreement really offered, apart from turning the page for two Balkan countries, is a chance to observe political tendencies in Greece, by highlighting parties’ true colors and capacities.