Name issue agreement, the day after in (North) Macedonia 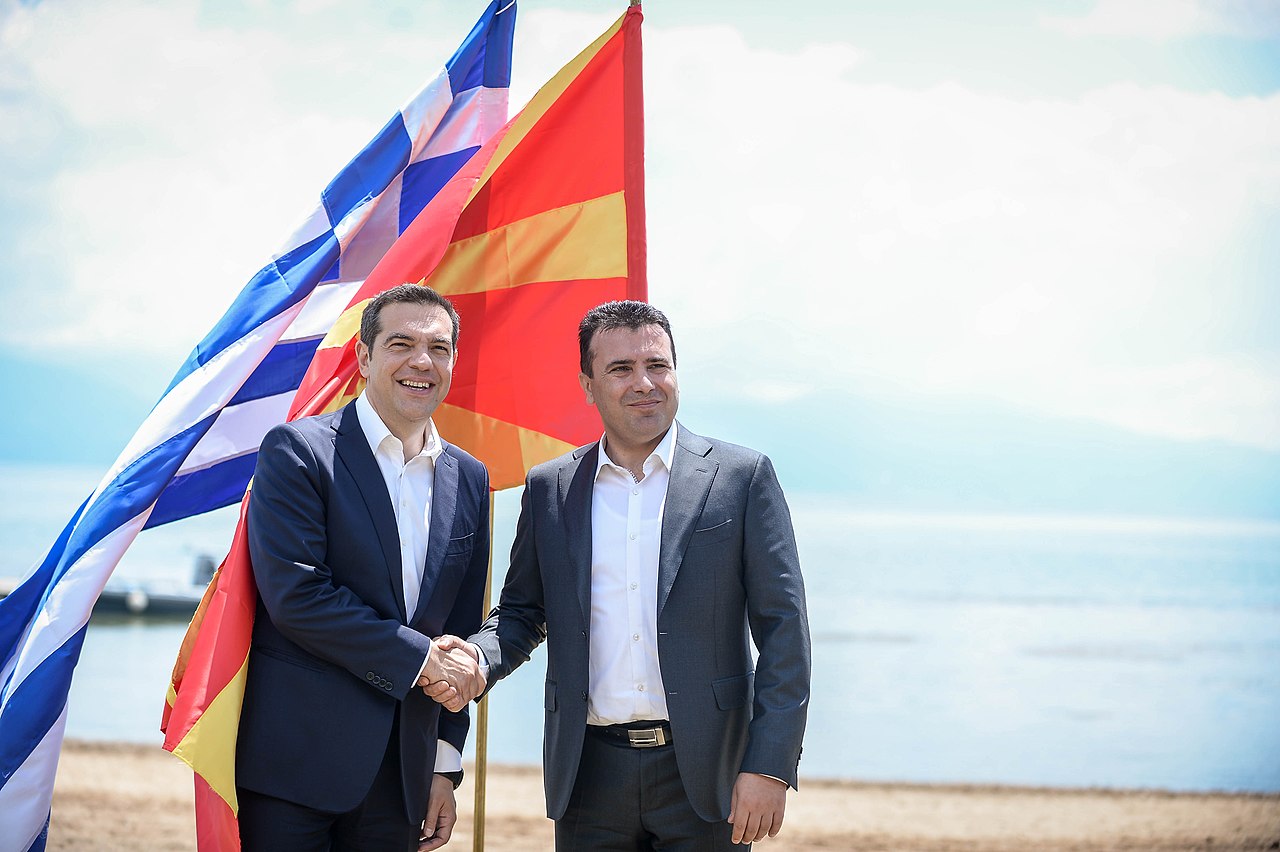 After almost 25 years of negotiation, Athens and Skopje agreed to end the long-lasting name dispute. The road to finalizing the agreement, though, is still long and in (North) Macedonia the society and political parties remain bitterly divided on the issue

After almost 25 years of negotiation, Athens and Skopje agreed to end the long-lasting name dispute. According to the compromise, Greece’s northern neighbour will use erga omnes – internally and externally – the name of Republic of North Macedonia. Macedonian and Greek Foreign Ministers Nikola Dimitrov and Nikos Kotzias, in the presence of both Prime Ministers, signed the agreement and announced a new era in bilateral relations.

EU High Representative Federica Mogherini and Commissioner Johannes Hahn, who attended the ceremony held on the Greek side of the border region of Lake Prespa, wholeheartedly praised the agreement as historic and congratulated Prime Ministers Alexis Tsipras and Zoran Zaev for their determination and leadership.

The road to full implementation, however, might be as painful and unpredictable as the negotiation itself. So far, the Macedonian Assembly has made the first step. Several days after signing, the agreement was ratified with 69 votes in favour out of 120 MPs. The 51 opposition VMRO–DPMNE MPs boycotted the session. But this is just the beginning, as several more steps from the Macedonian side should follow before the deal is sealed and transferred to the Greek Parliament for ratification.

The day after the historic agreement

The reactions to the agreement were easily foreseeable. In a polarised society like the Macedonian one, two predictable, opposite narratives have emerged. The opposition is against the agreement, while the government supports the final outcome. In this equation, the undecided are in the majority and their vote will make the difference on the forthcoming referendum.

Main opposition party VMRO–DPMNE described the agreement as against the state and national interests. “Legally, the agreement is anti-constitutional, and it is a national humiliation”, said former Foreign Minister Antonio Miloshoski. Dragan Danev, the coordinator of the VMRO-DPMNE parliamentary group, described the deal as an act of capitulation and “a genocide of Macedonian rule of law and an attempt to deny our existence”. Unhappy with the fast-track ratification procedure imposed by the ruling majority, opposition members left the plenary session scheduled for the approval of the deal. In the meantime, the conservative media and analysts described the agreement as harmful, treacherous, and humiliating.

On the other hand, those in favour of the agreement rationalise the outcome as a necessary evil, an investment into the future of the state and the people, whilst emphasising its positive aspects. Namely, the ethnicity and the language will still be called Macedonian, while the nationality will be called Macedonian/citizen of the Republic of North Macedonia in all documents. Also, the international codes will remain MK and MKD, as they have been registered so far in the International Organization for Standardization. Only the license plates for vehicles will be changed into NM or NMK. Prime Minister Zaev, during the plenary ratification session, said that the Prespa deal offers a solution to the traumatic three-decade-long dispute whilst putting an end to uncertainty.

“We have achieved a dignified and acceptable solution for both parties. The agreement protects our identity – we have not given up anything, nor has anyone taken anything from us. This brave act is a solution that is in the interest of the citizens of both countries”, Zaev said.

While political parties were quarrelling about who is a traitor and who is a patriot, around 2,000 people went out on the streets in Skopje to protest in front of the Assembly. The protests started right after the signing of the agreement. According to local media, the demonstrations were organised via social media by sports fan groups and a small pro-Russian conservative party. The first protests on June 17th, although announced as peaceful, ended up in violence with over 10 injured and around 25 arrested. According to the local media, groups of young people, some of them in masks, attacked the police with rocks and flares and tried to break through the police cordon and storm the parliament building. Following the escalation, the police intervened with armoured cars, shock grenades, and tear gas to disperse the crowd. The protests continued in the following days, but with lower intensity and without violence. Obviously, violence discouraged more people to go out and protest.

Another segment of the society that is vocally against the agreement is the diaspora. Peaceful protests were organised/announced all over the globe. One of the biggest organisations in the world, United Macedonian Diaspora (UMD), considers the package-solution unsuitable, whilst criticising the lack of serious public debate, zero involvement from Macedonian academia, and lack of transparency in the negotiation process.

“North Macedonia, as a solution to the 27-year-long bilateral dispute between the two countries, with its ultimatum for constitutional changes, changing the constitutional preamble, changing Article 49 related to the Macedonian national minorities, and use erga omnes, is a triumph for Greek diplomacy and a fiasco for the Macedonian identity, history, and future”, said UMD in this written comment.

The signing was just the first in a series of carefully planned steps. Ratification was the second, but now follows the bumpiest part of the road. President Gjorge Ivanov needs to sign the ratification (something that he clearly said he will not do under any circumstances) before it is published in the official gazette. Then, follow the constitutional amends (over 150 changes require a two-third majority, whilst Zaev at this moment has only 69 out of 120 MPs) to fulfill the erga omnes part of the deal. The final part, before Greece brings the Prespa deal before its own parliament for ratification, is the referendum. It is not clear yet whether it will be a binding or advisory referendum, but either way, it will be the biggest test for Zaev’s government and the overall implementation of the agreement.

In another perspective, the long-awaited deal is not only a success for the two countries, but also for the EU and the international community. As the ruling elites in Macedonia and Greece have put aside their political calculations, it is time for the international community to do its part. First of all, to work with the main opposition parties in both countries – both are part of the European People's Party group – and to deliver some of the promises such as EU negotiation date and an invitation for joining NATO so that the implementation ride can be as smooth as possible.

If the Prespa agreement is fully implemented and functional, it will have a positive impact not only on the two countries but also on their Balkan neighbours, that will be put under higher scrutiny to deliver more substantial reforms and to work on their open issues.

The happiest man during the ceremony on the Lake Prespa most probably was Ambassador Matthew Nimetz, a personal envoy of the UN Secretary-General, who led the name talks for almost two decades. As the media reported, Nimetz told his closest friends that he does not want a present for his birthday, which fell on the date of the signing of the agreement, because he received the best possible present from the two foreign ministers Dimitrov and Kotzias, with whom he had worked on the agreement in the past months. Truly, a unique present.