Željko Ivanović: being a journalist in Montenegro 22/01/2015 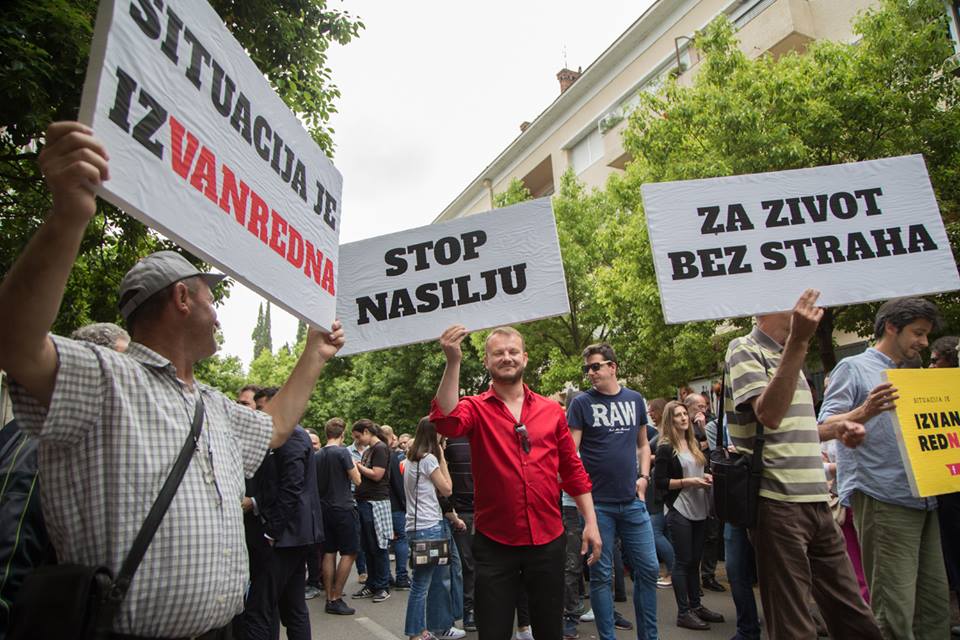 Olivera Lakić, investigative journalist from the Montenegrin newspaper Vijesti, was shot and wounded in front of her house, in the same place where she was beaten up six years ago. It's not easy to be a journalist in Montenegro

Tuesday, May 8th 2018, Podgorica. There is music on one side of avenue Svetog Petra Cetinjskog: about a thousand people have gathered to attend a concert organised on the Day of Victory over fascism. Then, around 9 pm, on the opposite side, a shot is heard.

The actress and the writer

After hearing the news of the attack on Olivera Lakič, actress Katarina Krek invited Montenegrin politicians to face their responsibilities, also criticising citizens for ignoring reality.

"If you keep trusting (Mevludin) Nuhodžić [Minister of the Interior] who is always 'stunned', or (Duško) Marković [prime minister] who, like a parrot, does nothing but 'strongly condemn', or the prosecutor who 'will do everything possible to identify those responsible', we will sink into the abyss on whose edge we have been for a long time. A month ago, the aforementioned people created a special team with the task of preventing episodes like this. Then, the current president of democratic Montenegro pronounced the word fascism, associating it with freedom of speech and information based on facts that the prosecution has so far neither challenged nor confirmed, actually not even dealt with...", wrote the actress on her Facebook profile.

She also reminded citizens that they are the ones who pay the salaries of state officials and that it is not enough that the latter, after "so many unsolved murders", issue statements saying what is now clear to everyone. "It takes responsibility, friends, not empty words", wrote Krek.

"I am disappointed that we ended up in the international media for this violent episode. Montenegro is still on the list of states where being a journalist and speaking up in public can cost lives", said Lidija Perović, a journalist and writer who has been living in Canada since 1999.

When in Toronto she is asked where she comes from and how she grew up, Lidija would like to be able to answer by saying positive things.

"I would like to be able to say that we are a country where freedom of speech and thought is respected, where crime and corruption are sanctioned, a country with a strong cultural sector that could arouse great interest, a country that has a huge environmental heritage and is safeguarding it for future generations. Unfortunately, I have not been able to do it for years", laments Perović.

According to her words, the attack on journalist Olivera Lakić is an opportunity to demonstrate the capabilities of the Montenegrin judicial system. "Will we be a society where citizens fear to be shot when they go out on the street? Or will we be a serious country? The world is watching us".

As of now, the identity of the person who fired at Olivera Lakić , journalist of daily newspaper Vijesti, is still unknown. The newspaper had been recently accused of promoting fascism by new-old president of Montenegro Milo Đukanović. "Happy Day of Victory over fascism. The regime has already honoured it by shooting Olja, of the fascist Vijesti", wrote journalist Ratka Jovanović on social media after learning of the attack on her colleague.

Olivera Lakić was wounded in front of her house, in the same place where, six years ago, she had been beaten.

She had recently published a series of articles on cigarette smuggling, a subject she had already dealt with in the past. In 2011, Lakić had investigated the "Tara" company in Mojkovac, which was suspected to produce counterfeit cigarettes, store them in a warehouse in Donja Gorica, and smuggle them. In her articles, she had reported the involvement of some police officers and the National Security Agency in this illicit business.

Lakić has already been the target of various threats and intimidations in the past. After being physically assaulted in 2012, she lived under guard for almost three years, while temporarily withdrawing from journalism.

To date, the instigators of the previous attacks to Olivera Lakić remain unknown.

The lack of protection of journalists

Since 2004, when editor-in-chief of newspaper Dan Duško Jovanović was killed, 76 cases of attacks against journalists have been registered in Montenegro, of which 43 had a judicial epilogue and 25 are still under investigation, while in the remaining 8 cases investigations did not even start.

Montenegrin public opinion has recently had the opportunity to freshen up the memory of the attacks against journalists thanks to a documentary called Silom na sedmu , which was broadcast on April 10th.

The documentary, produced by NGO "35mm" and TV Vijesti, recalls that state employees who, by blocking the investigations, have guaranteed impunity to the most serious attacks against journalists – seriously compromising the rule of law in Montenegro – have never been tried, and that the resignation of those who have committed errors in the exercise of their profession is a real rarity in Montenegrin society.

Commenting on the attack on Olivera Lakić, Vijesti editor-in-chief Mihajlo Jovović said the police had never investigated what the journalist discovered. "I have no words. How long will these things continue to happen in our wonderful Montenegro? No attack against her had a judicial epilogue. Many crimes she has reported in her articles have never been investigated. How long will we have to fear these cowards?"

According to Serbian journalist and blogger Nebojša Vučinić , "watchdog of democracy" is the term that best describes the essence of the journalistic profession, so it is not surprising that journalists are the target of attacks even in developed democracies. "Even more so in small, semicolonial post-socialist quasi-states. To be clear, these things have always happened, but reporters enjoyed a certain protection and were motivated to deal with social issues", explains Vučinić.

He adds that journalists, and media workers in general, are attacked in various ways, but the aim is always to frighten them and instill fear in the population. "This seed of violence easily takes root in societies where, traditionally, no problem is resolved democratically and through dialogue", says Vučinić.

Milo Đukanović also commented on the attack on Olivera Lakić. "The attack on journalist Olivera Lakić confirms that the state must counter the arrogance of criminal structures", said the leader of the Democratic Socialist Party and newly elected president of Montenegro.

According to Vijesti columnist Ratka Jovanović, when the regime expresses outrage at the attack on Olja, Vijesti, or any other independent journalist in Montenegro, it does so out of pure insolence.

In addition to condemning the Montenegrin political class, Ratka Jovanović does not spare criticism for European and US officials either. "I do not know how to define what European and US officials and diplomats are doing: hypocrisy, immorality, or pure commerce. They say two, three trivia about the importance of journalism, they say that the attacks are unacceptable, and then they return to the arms of some member of the regime. They know exactly who beats and shoots, and continue to collaborate with thugs and murderers. I have not trusted the West since it helped destroy Bosnia Herzegovina, but these lost people trust Western politicians", wrote Jovanović.

In her opinion, those who shot Olivera Lakić did so by following the regime's orders, but the EU and the United States put the gun in their hands.

The journalist has asked not to publish "their hypocritical statements about the attack on Olja". "We do not need their condolences. For 30 years now, they have been watching how the regime is killing us, and after every election stained by fraud and vote-buying, they say that another step has been taken towards Europe. I do not want to have anything to do with such a Europe, not even indirectly, through the media". 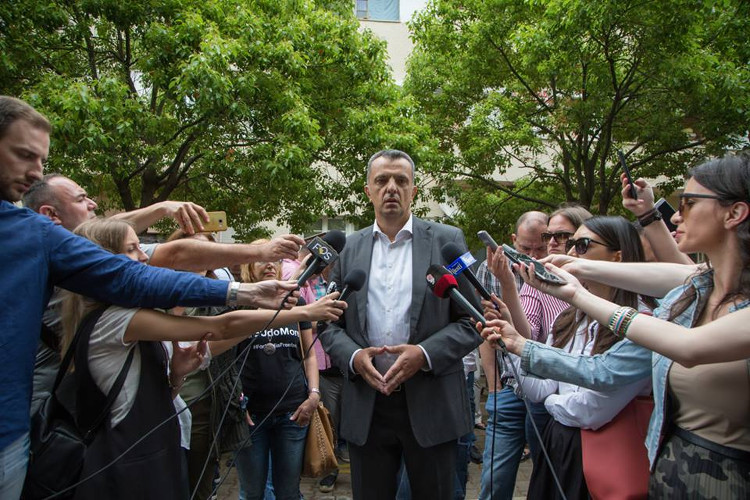 The silence of the citizens

In the aftermath of the Olivera Lakić attack, a protest was organised in front of the government headquarters in Podgorica. The concert of the day before had attracted about a thousand citizens, while the protest was attended by a few hundred people, the same faces that are always seen in gatherings of this type.

"People's apathy should not be a surprise, because everyone cares only about themselves", says Vučinić, adding that, while aware that the same thing may happen to them, citizens remain inert, conformist, and disinterested.

"Protests against attacks on journalists and the media are often organised, not to ask for protection, but rather to contribute to the change of political leadership, even if each new leadership behaves in the same way towards the media. Proof of this are the political changes in Serbia after the murder of Zoran Điniđić and the fact that the seed of what is happening today in the country was thrown at the time when the Democratic Party was in government", explains Vučinić.

Olivera Lakić has been injured in one leg and her life is not in danger.