Željko Ivanović: being a journalist in Montenegro 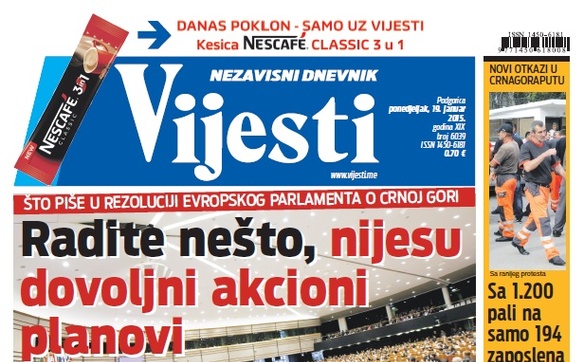 Journalists in South East Europe have to face assaults and threats for carrying out their professional activity. The story of Željko Ivanović in Podgorica

Željko Ivanović is the Chief Executive Officer of “Daily Press”, “LLC”, and founder and publisher of the daily “Vijesti” in Podgorica, Montenegro. In the past he has worked for the Montenegrin weekly “Monitor”, for the “Alternative Informative Network” (AIM) and for different media outside Montenegro

You have experienced a physical assault. When and how did this happen?

The attack occurred on 1 September 2007. The date had a certain significance, too: Vijesti was celebrating ten years of publishing. After the attack, I stated that this was, symbolically, a way in which the regime was congratulating us. We had invited all the employees of Vijesti for a celebratory dinner to a restaurant in the centre of Podgorica. When I left the gathering, at around two o'clock in the morning, three attackers were waiting for me by my car with wooden clubs. It was a classical setup, with an organized group that followed me, preparing to intimidate and physically endanger the director of the most influential media outlet in Montenegro.

You were taken to the hospital. What did the doctors say?

I spent a few hours in the Montenegro Clinical centre, and was diagnosed with a cheekbone fracture, as well as many bruises all over my body caused by the wooden clubs. It was only due to my physical strength that I managed to avoid major injuries, taking into account the brutality of the attack I experienced.

Were there any witnesses?

There were two: our company driver, who heard the attackers and saw them from a distance in the park behind the restaurant (not knowing, at the time, what they were preparing for) and a tenant in the building my car was parked in front of. He heard some noise and saw the attack and the attackers pretty clearly from his balcony. Later, when the regime conducted a trial for the alleged culprits (they were not the ones who actually attacked me), both witnesses claimed that the men on trial were not like the actual attackers, as to physical constitution and speech. But since the regime organized this farce, the prosecutor and the judge accepted them as the real perpetrators, in order to close the case as fast as possible. This mockery was more painful to me than the attack itself. It convinced me even further that a group of people close to the regime was behind this attack.

How did you deal with the attack on a personal level? Did you change anything in your life?

At first I was shocked, because I couldn’t have dreamt of something like this happening. Then I felt disillusioned by realizing that nothing would ever be the same after this attack. Nothing has changed in my professional engagement and in my struggle for a credible and professional journalism. Things have changed in my lifestyle, however. I had to employ a security service that would take care of my safety, and of the safety of our offices.

Has this attack affected your family? How?

Of course it has. The pressure suddenly grew on them, and I had to move them from Montenegro quickly, so they spent a year in Vienna. They care about my safety more than I do myself.

You are the co-owner and director of one of the leading media outlets in Montenegro. Please tell us of other attacks that Vijesti has experienced in the last several years.

In the last eight years, there have been around 10 attacks on our employees and property. After the attack on me, similar but more brutal attacks were carried out on our colleagues Tufik Softić, Mladen Stojović, Mihailo Jovović and Olivera Lakić. Our vehicles were torched three times and there was one attack where dynamite was placed under the main editor’s window.

Why are you, as a media outlet, the target of attacks?

Cause of our influence and credibility, as well as for the inability of the regime to control us. The atmosphere of lynching that the regime has created through its leading officials and state-controlled, propagandist media outlets, has made us a target for everyone who is connected to crime and corruption and was reported of by our paper.

Do you have any advice for journalists who might experience what you did, especially when it comes to physical attacks? What should they do in such a situation?

It’s hard to advice. The only thing you can do is pray to survive. When an organized group, either from government or crime structures, is preparing attacks on you, you don’t have much space to defend yourself. It’s all in their hands, depending on the plan; if they decided to execute you or ‘just’ beat you up. If you survive, then there is no backing down, because it is better to die than to be humiliated.